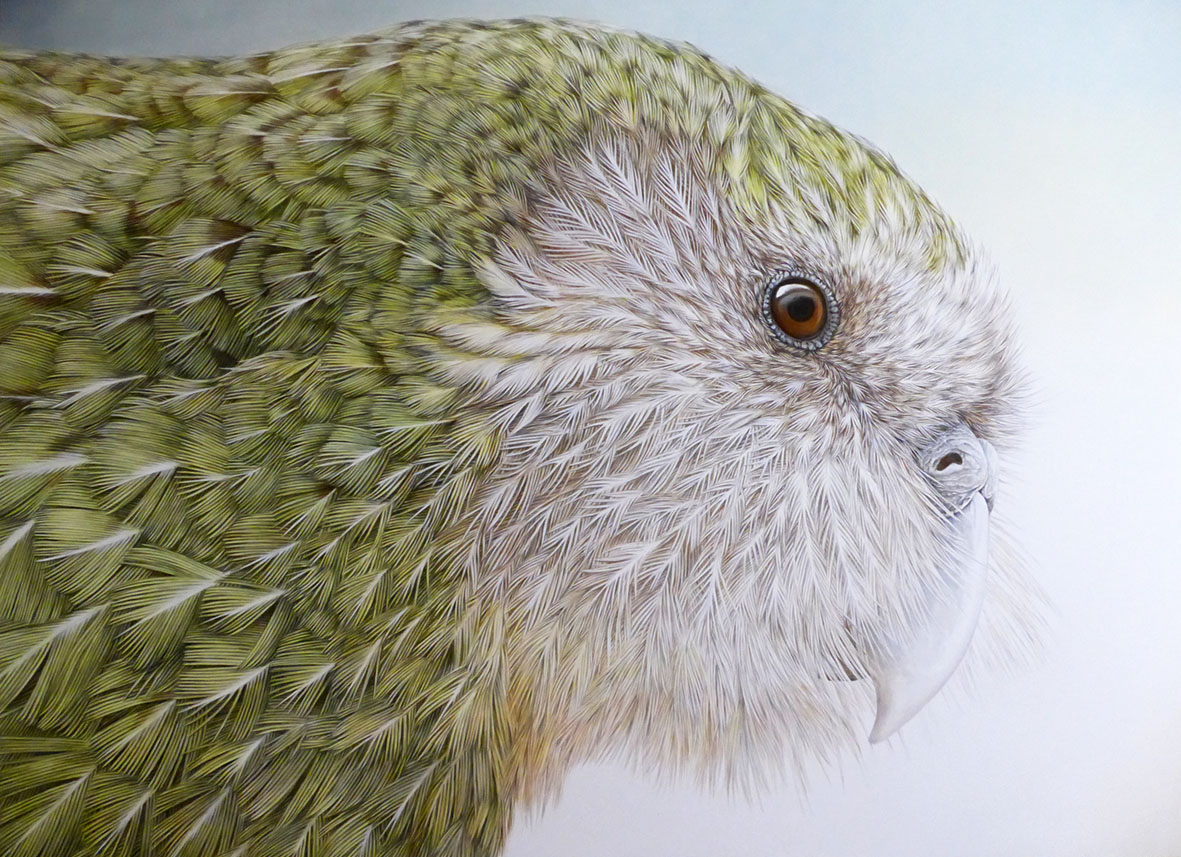 Congratulations to Sydney based painter Janet Luxton who has been selected as a finalist and awarded the Highly Commended Prize in the People’s Choice category in the 2020 Wildlife Artist of the Year for her stunning work ‘Kakapo, New Zealand night parrot’.

Wildlife Artist of the Year is an internationally renowned competition through the David Shepherd Wildlife Foundation (DSWF) which has been described as the ‘Oscars of International Wildlife Art’, and showcases the beauty and colour of the natural world, supports some of the world’s finest and most exciting wildlife art, and raises vital awareness and funds to protect endangered species.

Founded 10 years ago by the late David Shepherd CBE FRSA (1931 – 2017), every entry and proceeds from all sales, supports David Shepherd Wildlife Foundation’s (DSWF’s) work to fight wildlife crime, protect endangered species, and engage local communities with their native wildlife across Africa and Asia.

The prestigious annual competition receives entries from artists across the globe and brings together myriad forms and media. Each year, shortlisted entries are exhibited and available for purchase, from which category winners and an overall winner are selected by an expert panel of judges.

Due to COVID-19, this year’s exhibition will be available online via the DSWF website, allowing art collectors and wildlife lovers to be able to still view and purchase works from the Wildlife Artist of the Year 2020 exhibition. The online exhibition will run from Wednesday 27 May –  Sunday 31 May, and the winners will be announced via an online award ceremony (details to come).

Sydney based artist Janet Luxton worked as a draftsman and graphic designer in Auckland during the 1970’s. In 1981 she joined a major yacht construction project and sailed to San Francisco in 1984. It was here that she studied painting at the San Fransisco Art Institute with photorealist artist Richard McLean before a period at the Jerusalem Print Workshop in Israel studying etching and other printmaking techniques with Arik Kilemnick. Between 1989 and 2011 Janet designed, built and operated two small wineries in NSW and South Australia with attached galleries for her paintings, drawing and etchings. Janet has been a finalist in the Ravenswood Australian Women’s Art Prize, Dobell Prize for Drawing, The Pacific Rim Print Exhibition and the Outback Art Prize, and has won the Gold Award at the National Packaging Council of Australia and was commissioned by the New Zealand post to feature on a set of six stamps.

“My paintings are an attempt to portray the beautiful diversity and individuality of the animals and birds caught up in these turbulent times. All life is truly unique and deserves our unreserved respect and support. I hope my efforts might encourage others to think likewise”

Janet is currently working on new oil paintings for an upcoming exhibition at Australian Galleries Sydney that will coincide with the release of her first limited edition monograph. For all enquires, please email sydney@australiangalleries.com.au