Peter Wegner – a study of peace, of whiteness 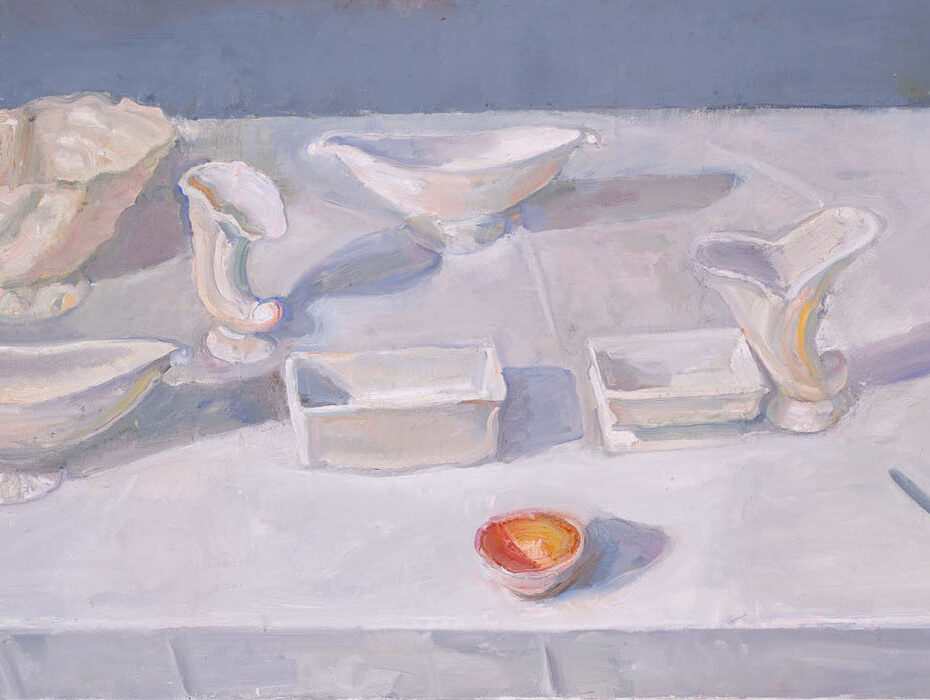 “This exhibition is the result of explorations, a narrowing down, a turning inwards, a study of paint itself, light and shade, the shapes and the emptiness, balance and discord, stillness and tension. A study not of people but the absence of them, of peace, of whiteness.” Peter Wegner, 2016

Peter Wegner is a painter, sculptor and highly skilled draughtsman, best known for his poignant explorations of the human condition. He has famously chronicled his enduring friendship with Graeme Doyle, a performance artist and poet who has schizophrenia, since they met as art students in the early 1980s.
Wegner continued his investigations into the endurance of the human spirit in his more recent series ‘The Centenarian Project’. Inspired by his 104 year old aunt, the artist decided to sketch ten centenarians in order to discover the secrets to living a long life.

However, for his current exhibition at Australian Galleries Melbourne, Wegner shifts his focus to painting objects rather than people.

“While my recent work has focused on portraiture and figurative subjects, the study and examination of the human, I have long held the desire to rekindle my interest in still life. To look inwards, closer to home, to the domestic. My wife Jenny’s wealth of collected objects offered the first spark for this new exploration. These beautiful shapes that curve and twist in an elegance that reminded me of my early childhood when such objects were a familiar part of our own household. The matte white glaze that was popular in the 50’s and 60’s and the quality of whiteness piqued my interest.

There was an allure to exploring this palette, this whiteness. The subtleties of the different shades of one part of the colour spectrum, how complex, how exciting that can be, even compared to a more tonally diverse work. Perhaps I wanted to challenge myself with this deeper investigation of this limited palette, which is as much about the ‘paint’ as it is about the subject matter.
Arranging the objects on a white sheet, there is a tribute and a reference to Morandi, whose work I have always admired. Compositionally, however, I prefer to spread out the objects I’m painting so that each item can assume a separate identity. Playing around with the dynamics of the group, positioning the various vases and vessels so that they might appear to communicate with each other. l began to examine the idea of one object being discordant or misplaced. In some of the paintings the dark oil can is the obvious outsider and at times becomes the witness, the knife plays a similar role. The dynamics inside the frame and then as the series grew, the dynamics between the works themselves. Finally, perhaps as an outsider, the nude on a white sheet has become part of this group.

So this exhibition is the result of these explorations, a narrowing down, a turning inwards, a study of paint itself, light and shade, the shapes and the emptiness, balance and discord, stillness and tension. A study not of people but the absence of them, of peace, of whiteness.”
Peter Wegner, 2016