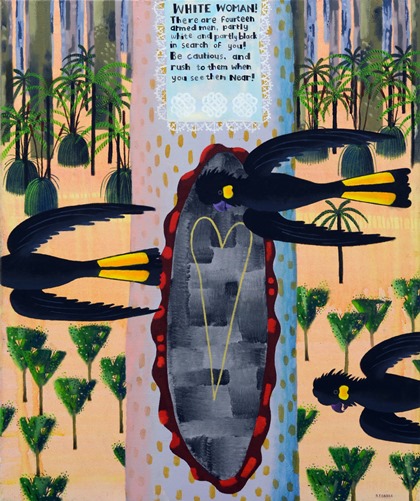 “We’re living on this land and I think we have to reconcile what our position here is.”

It was a confronting realisation for painter Rodney Forbes, who had lived in Gippsland for eight years, when he learned of the region’s bloody settlement history. “I had thought aboriginal deaths were isolated frontier incidents carried out by maverick settlers,’ he said. ‘It was only during the Bicentennial celebrations in 1988 that I started to understand the scale of the genocide and the official tolerance of the killings”.

Forbes’ 2014 exhibition at Australian Galleries, Melbourne, entitled ‘Lohan-Tuka: The Lost White Woman of Gippsland’, examined the infamous myth of the captive white woman of Gippsland. In the 1800s, Angus McMillan claimed that a white woman was being held captive by the local Gunai Kurnai Aboriginal people. Funds were then raised in Melbourne for expeditions to find the woman.
“It was during a lot of those expeditions that McMillan carried out his massacres. The same ruse was used in a whole bunch of places,” said Forbes.

It is estimated over 2,000 Indigenous people were lost in Gippsland at this time.
Historians point to the ‘founder of Gippsland’, Angus McMillan, as the chief perpetrator, but also implicate the then Governor Tyer, for turning a blind eye to the mayhem and even participating in ‘aboriginal hunts’.

‘By 1860’ says Forbes, ‘there were only 300 Gunai recorded as remaining, and astonishingly, McMillan was appointed ‘protector of aborigines’. To this day the Federal electorate is named after him. To me this indicates there is a lot of reconciliation work to be done. I hope my paintings will make the story more widely known.”

Forbes consulted with Gunai Kurnai elder Uncle Wayne Thorpe when creating this body of work, researching as much as he could about the history he was to portray.

“We’re living on this land and I think we have to reconcile what our position here is. I think this story is sort of ignored in Gippsland, it should be confronted. Our country is founded on a lie and we need to reconcile that so we can move ahead.” 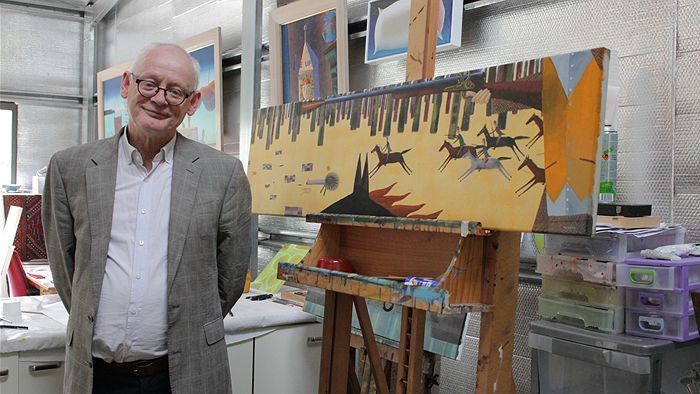