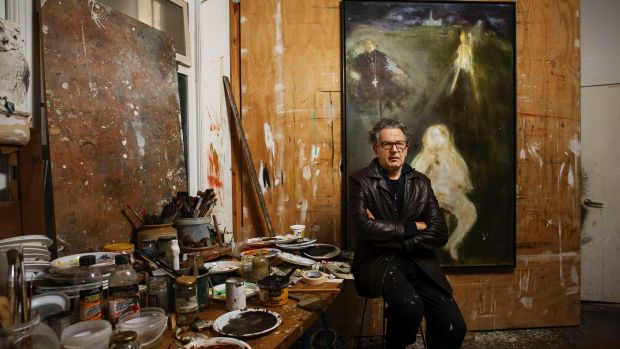 In the foreground a naked, seated figure voices a cry of apparently existential anguish while a black-clad priest hovers over his right shoulder like an malevolent, predatory crow. Behind, a bishop retreats serenely towards a distant church on top of a hill.

The seated figure is Steven Fisher, a survivor of sex abuse by the Anglican clergy in Tasmania. He also campaigns on behalf of victims.

The painting is by Sydney artist Rodney Pople and sitting for it was, says Fisher, “the hardest thing I have ever done”

“To get the right passion into the painting … to bring out that type of emotion in yourself … you have to put yourself back in that place,” he says.

“It’s a really striking portrait and it really encapsulates what I went through as a victim. You’ve got the priest almost looking smug like a smartarse and the old bishop going up the hill going, ‘Nah, nah. I don’t want to know about this’. He’s really nailed it.”

The work, which has been entered into this year’s Archibald Prize, is a reflection of Pople’s long-standing interest in the abuses of power within the Christian churches in Australia.

Pople wanted to make a picture that would have lasting impact in an age that is super-saturated by imagery.

“My thinking is that somehow that studied image you do in a painting seems to have a power much more than the fleeting image of a video or the written word,” he says. “I thought if I could get the intensity in a portrait it will live on and on and be a reminder of the atrocities of the church.”

Pople, a multiple Archibald finalist, has long had a reputation for controversy, sparking protests in 2010 with a work that combined vivid sex scenes with classic Renaissance religious imagery.

Initially, he approached Fisher looking for contacts among his network of sex abuse survivors.

“He said, ‘Do you know anyone who would sit for a portrait?’,” says Fisher. “I said no one that I know would but I’d be happy to do it.”

Pople travelled to Brisbane to meet Fisher and make preparatory sketches and photographs. At one point he asked Fisher, who was abused as a teenager by convicted paedophile, to strike a pose that expressed what he had been through. The startling result, captured in Pople’s reference photograph, eventually formed the basis of the portrait.

“I sat there and I thought back and I thought of the way the police mishandled the whole thing, and the church not wanting to know and the guilt I felt because I had introduced the perpetrator to other boys,” says Fisher. “The scream just came out and I was as shocked as Rodney was.”

When Fisher saw the final painting, he was shocked by how much raw emotion Pople had captured.

“If one person looks at this painting and is helped then it has done its job.”