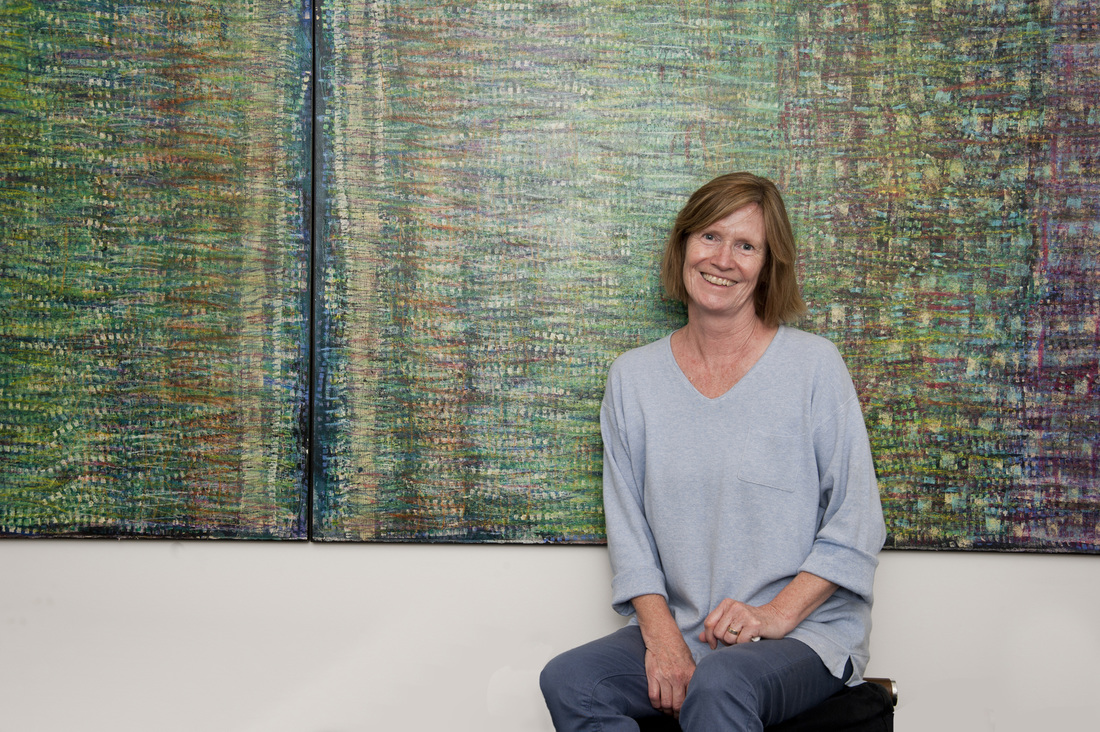 Anne Saunders was born in Edinburgh in 1955 and studied at Duncan of Jordanstone College of Art, Dundee, specializing in Illustration and Printmaking. She graduated with a Master of Arts (Fine Arts) by Research from La Trobe University Bendigo; thesis title ‘Still Lives’, in 1995. In 1977 Anne emigrated to Australia and commenced lecturing at University of Southern Queensland, moved to Charles Sturt University, returning to Scotland 1983 – 1987 where she established an Art Gallery in Peebles. Anne returned to Ballarat in 1987 and continued lecturing at University of Ballarat, retiring in 2010. In 2013 she moved to Daylesford with her artist husband Doug Wright. Together they now work and reside at Brae Studios a purpose designed studio house built in 2015. Doug and Anne offer support to the arts in and around the Daylesford region, participating in Daylesford and Macedon Ranges Open Studios (DMROS), sponsoring ARTOBER that brings together a range of arts events in Hepburn shire during October.

Anne Saunders has held over 20 solo exhibitions and has contributed to over 50 group exhibitions. She has been a finalist in juried exhibitions many times throughout her professional career. These exhibitions have taken place in Australia, Singapore, New Zealand and the U.K. In more recent years Anne has enjoyed residencies with WASPS (Working Artists Studio Provision Scotland) and has exhibited her works in Edinburgh and Newburgh.

Her painting positions itself in the dichotomy of her two worlds, Scotland and Australia. Place, journeys, metaphorical reference to footprints, pattern with the association to place, memory, moments and people. The dichotomy of the ‘here and there’ the division, separation, repetition, random marks, two equal parts. The ‘here and there’ often described by footprint, shapes, random marks, pattern are mixed with abraded surfaces suggesting rambling connections with these two lands. The subtle fading and broken lines/marks often suggesting the tenuous hold we have on the planet and the fragility of situations and circumstance. Her methodology combines a painterly and mark-making configuration, and with a firm commitment to abstraction she works on surfaces such as canvas, paper, and paper on board. Anne’s new environment in Daylesford has inspired an interest in gardens, finding a crossover for Australian and Scottish influences, using light, colour, surface textures, pattern and coded imagery. 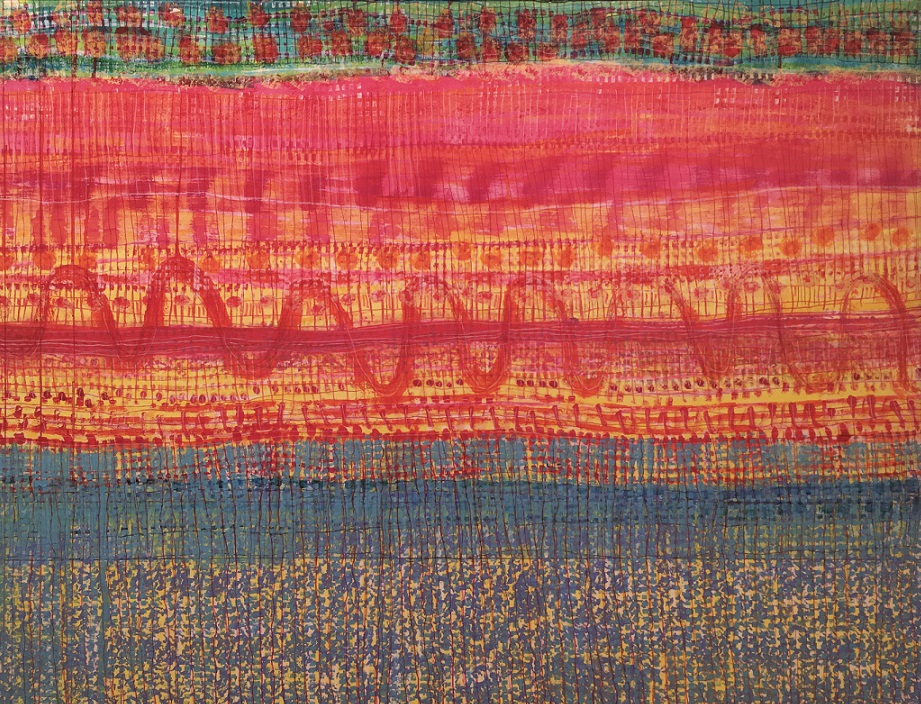 Anne Saunders
Heat of the day 2019 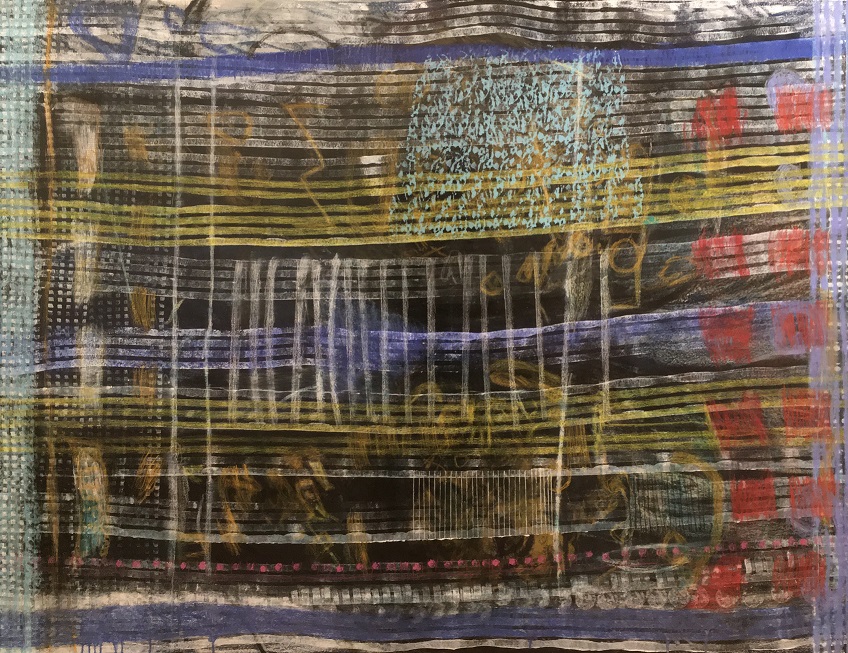 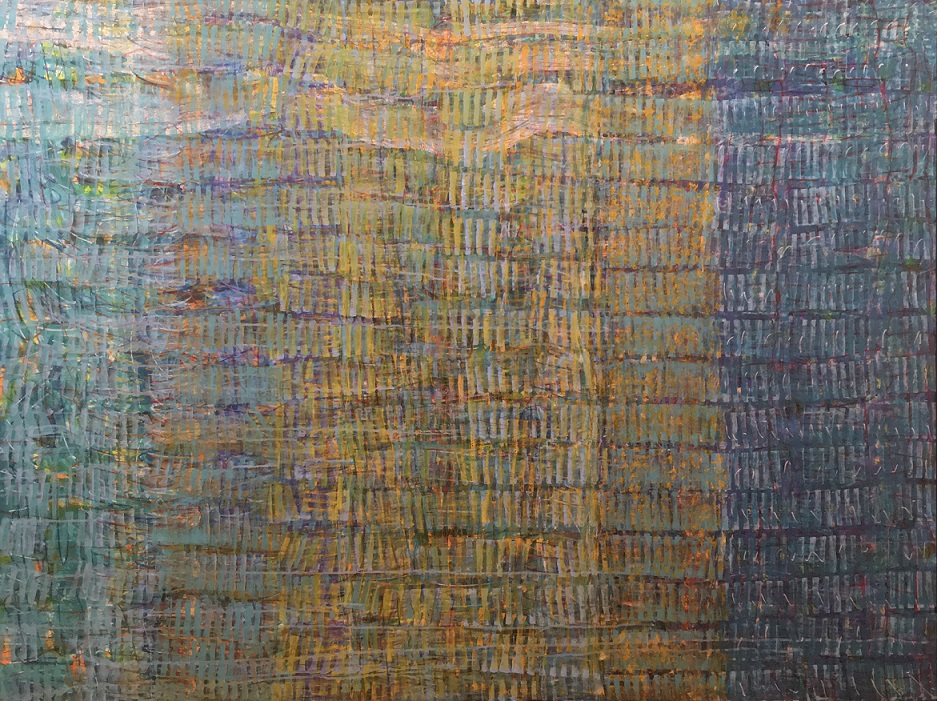 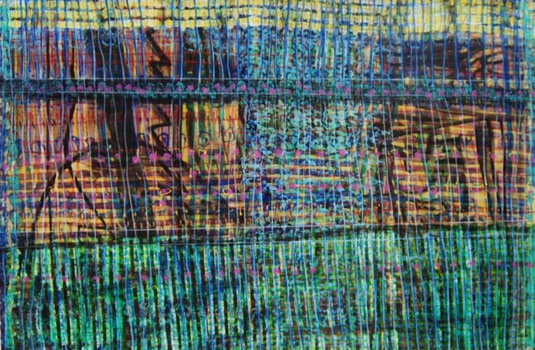