Sculptor, Greg Johns’ work, Transfigure, has been featured as the New Art Centre’s ‘Work of the Week’.

The New Art Centre is a sculpture park and gallery, specialising in 20th and 21st century works of art, set in over sixty acres of parkland in the Wiltshire countryside, England.

In 2002, Greg Johns purchased 400 acres of land at Palmer, a small town two hours drive from Adelaide. It is a landscape of bare hills, sparse vegetation, rocks, boulders, steep escarpments and an enveloping sky of distant horizons. In the years since, Johns has placed the totemic forms of his sculpture in juxtaposition with this harsh, elemental countryside. Although his work looks very much at home in its Australian surroundings, Johns hopes that the visual language is equally understood around the world:

‘I have exhibited extensively in Europe over the last 20 years, in England, Spain and Denmark. What I have been insistent on is sending sculpture which has been “forged” from the interior and exterior forces of this place, Australia. I believe this work which has historical links back to European sculpture, but at the same time has been modified, hybridised by influences from this place [Australia], has a quality which can now inform sculpture in the northern hemisphere.’ – Greg Johns, 2010

Born in Adelaide in 1953, Johns was educated at the South Australian School of Art, and has had solo exhibitions in Australia, Asia, New York and the UK, most notably Thirty Year Retrospective at the McClelland Museum, Melbourne in 2006. Johns is widely regarded for his commissions, including: Pattern 3, Pocheon, Korea, 2005; Landlines, Gawler, Adelaide; and the upcoming Within – Without for the Lachlan River Sculpture Trail, New South Wales, 2022.

Images and text courtesy of the New Art Centre, England.

Congratulations to Raymond Arnold who has been announced as a finalist in the 2022 John Leslie Art Prize for landscape painting.

The biennial John Leslie Art Prize is one of Australia’s most prestigious prizes for landscape painting. The Prize was inaugurated in 2000 and is named after the Gallery’s Patron, John Leslie OBE (1919-2016). The continuation of this $20,000 acquisitive prize is made possible through the generous ongoing support of the John Leslie Foundation.

The shortlist of 50 finalists was selected from a total field of 455 entries received from all over Australia by this year’s judges Dr Sheridan Palmer, Melanie Caple and Simon Gregg. The list of finalists includes works by leading and emerging artists from around Australia and spans a wide range of styles and approaches from the field of contemporary landscape painting.

Congratulations to Sue Anderson, Ron Robertson-Swann and Ayako Saito who have been announced as finalists in the 2022 Deakin University Small Sculpture Award.

This is the 12th year of the award – 306 entries were received, from which 41 finalists have been selected by this year’s judges, Lyndel Wischer, Robert Hague and Leanne Willis.

This prestigious acquisitive award and exhibition recognises and supports excellence in contemporary sculpture practice, organised by the Art Collection and Galleries Unit at Deakin University. The prize for most outstanding work will be awarded $10,000 and become part of the Deakin University Art Collection 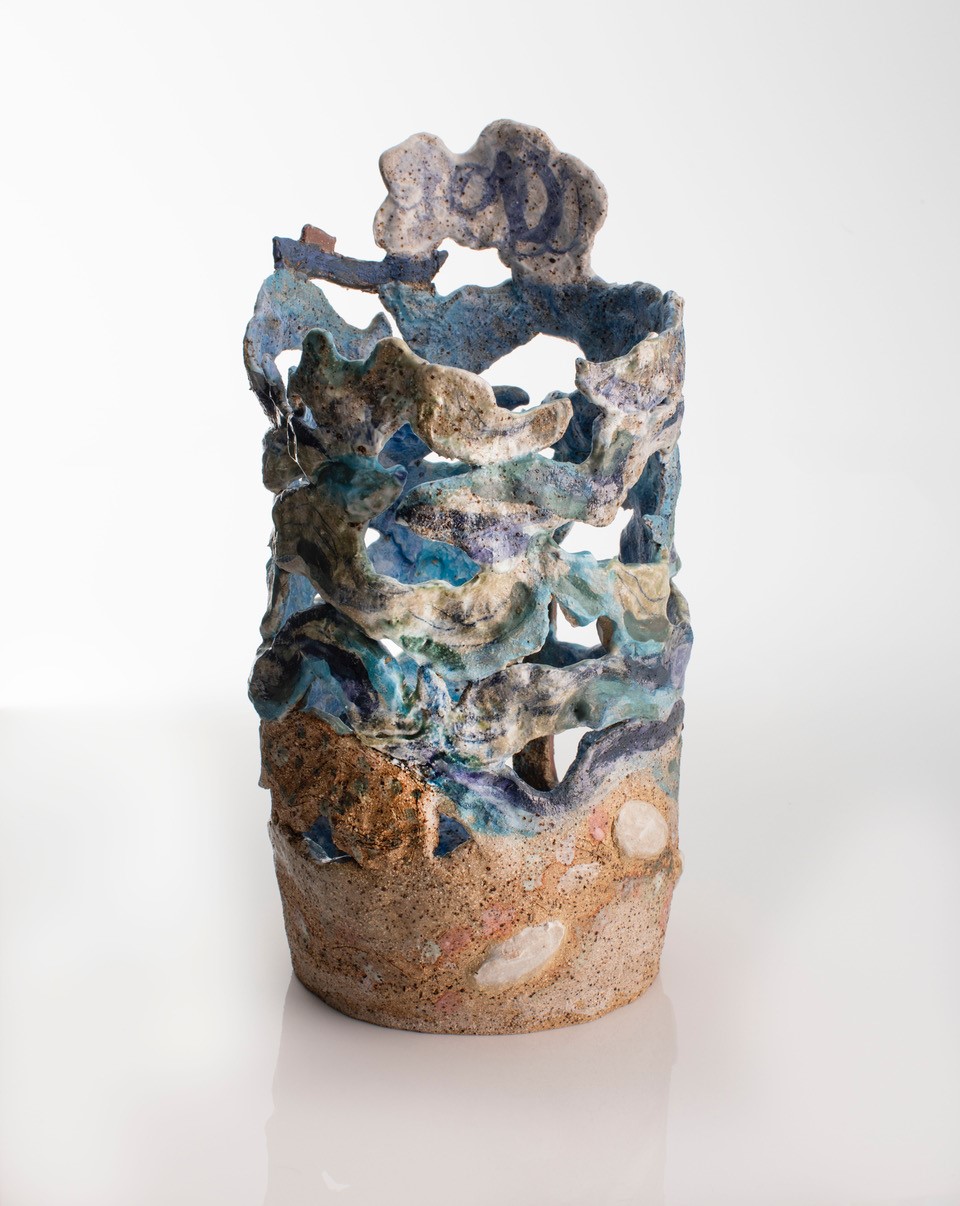 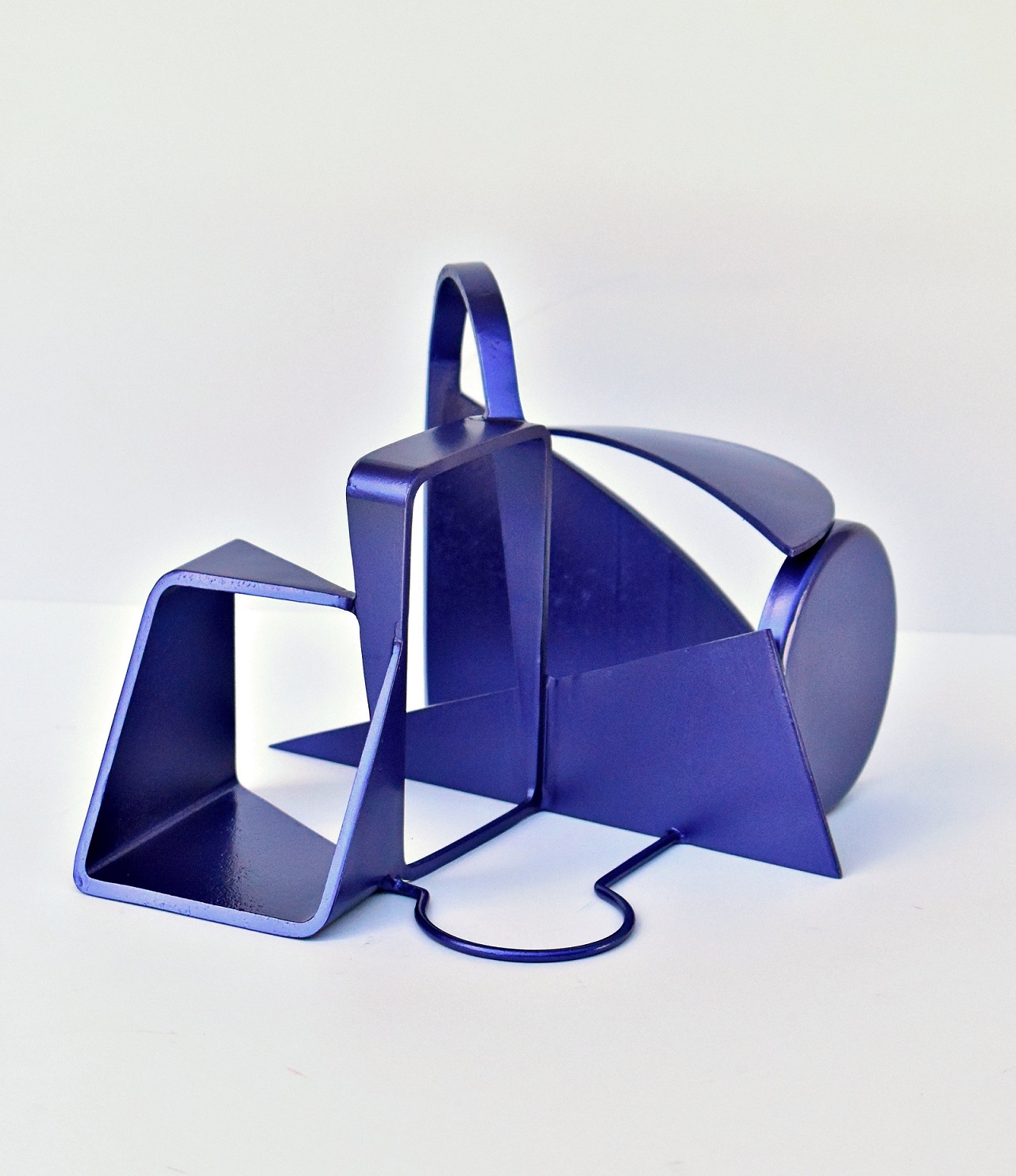 Congratulations to Martin King, whose work from the 2022 Waterhouse Natural Science Art Prize has been selected to travel in the touring exhibition.

The Waterhouse Natural Science Art Prize commemorates the birth of The South Australian Museum’s first curator, Frederick Waterhouse. The prize encourages artists to investigate the world around them and present their perspectives on natural science. Entrants respond to scientific issues facing our planet, offering a platform to contribute to the debate.

The prize-winning artworks and commended finalists will undertake a tour following the Adelaide season. They will be shown at the National Archives of Australia in Canberra from Friday 16 September until Sunday 13 November.

Image above: The two intaglio plates Graeme has been working on for the print commission

Congratulations to Graeme Peebles who has been selected as a part of the 2023 Groep Van Roey Print Commission.

Every 3 years, the Belgian construction corporation, Groep van Roey commission 7 international artists to produce a print portfolio based on an environmental theme. The theme for 2023 is water.

Participation is by invitation only, and Graeme is the first Australian artist to be selected.

Every artist receives 10 copies of their own prints, plus one copy of the portfolio. The other 283 portfolios are all gifted to national museums, public galleries, organisations such as UNESCO, political leaders and art collectors throughout Europe.

Congratulations to Mary Tonkin who has been announced as the winner of the Holding Redlich People’s Choice Award in the 2022 Salon des Refusés.

In her artist statement, Tonkin noted that she painted Hot Kiss, Kalorama amid the backdrop of the pandemic and hours spent with her children in the bushlands surrounding her home in Kalorama, Victoria.

‘Hot kiss, Kalorama was made entirely en plein air in bush on my family’s farm at Kalorama in the Corhanwarrabul (Dandenong Ranges), East of Narrm (Melbourne) during late Summer and early Autumn. In this spot the bush is dominated by Brown Stringybark and Messmate gums with an understory of Prickly Currant Bush and Bracken Fern. It is named after the memory of a particular kiss; the somewhat shattering tingle and sparkle of which seemed alive in the forms as I painted them,’ Tonkin writes.

‘Mary’s work draws your attention as soon as you enter the room,” Stephen said. ‘It’s an honour for Holding Redlich to recognise Mary tonight and present her with a very well-deserved People’s Choice Award.’

Australian Galleries is thrilled to be presenting Hot Kiss, Kalorama, as a part of Mary’s exhibition at Sydney Contemporary 2022. For further information, please email Sydney@australiangalleries.com.au

Peter Wegner continues to add to his ambitious centenarians series with a solo exhibition at Benalla Gallery, Victoria.  In a feature by the ABC, Wegner discusses the particulars of the exhibition and what encourages him to connect to his subjects.

The Centenarians celebrates a project which commenced in 2013 when acclaimed artist Peter Wegner drew his Aunty Rita. This formative sitting inspired Wegner to seek out other Centenarians who were still living lives with mobility, curiosity and purpose. In the eight years since Rita’s portrait, the artist has completed portraits of well over 100 Centenarians across Victoria and New South Wales.

“Each drawing was completed from life in an afternoon or morning with little alteration to that first impression, they are moments captured within a time allowed.” 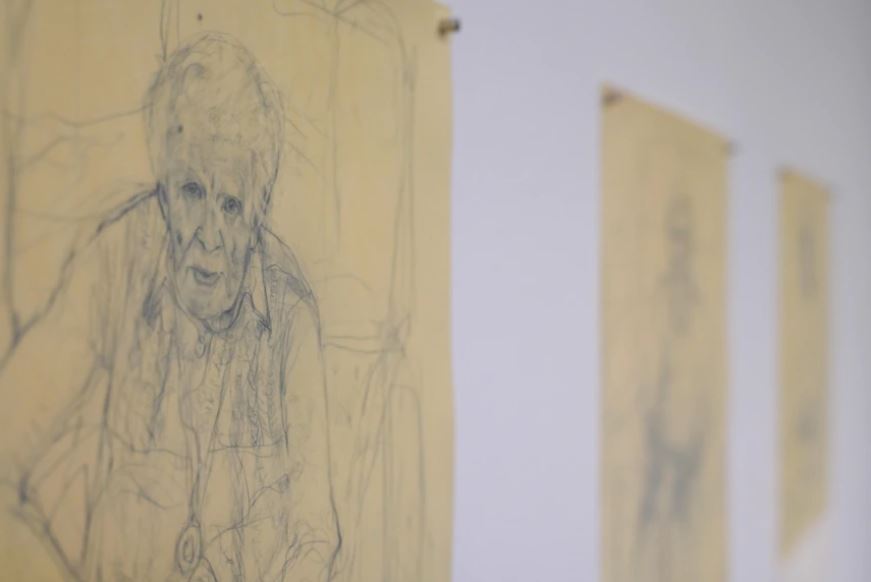 Peter Wegner received a postgraduate diploma in fine arts from the Philip Institute of Technology in 1988. Wegner famously painted his friend Graham Doyle more than 100 times since they met in art school in the 1980’s. He has held solo exhibitions in Sydney and Melbourne and his work has been included in group exhibitions at the National Portrait Gallery, Canberra and the Art Gallery of New South Wales, Sydney.

Wegner was announced as the winner of the 2021 Archibald Prize at the Art Gallery of New South Wales for his painting Guy Warren at 100. He was awarded the Doug Moran Prize in 2006 and completed a commission sponsored by BHP for the National Portrait Gallery. He has lectured in drawing at Ballarat, La Trobe, RMIT and Monash since 1996. His work is held in the collections of the National Library of Australia, Canberra; the National Portrait Gallery, Canberra; the State Library of Victoria, Melbourne and several regional and tertiary galleries. 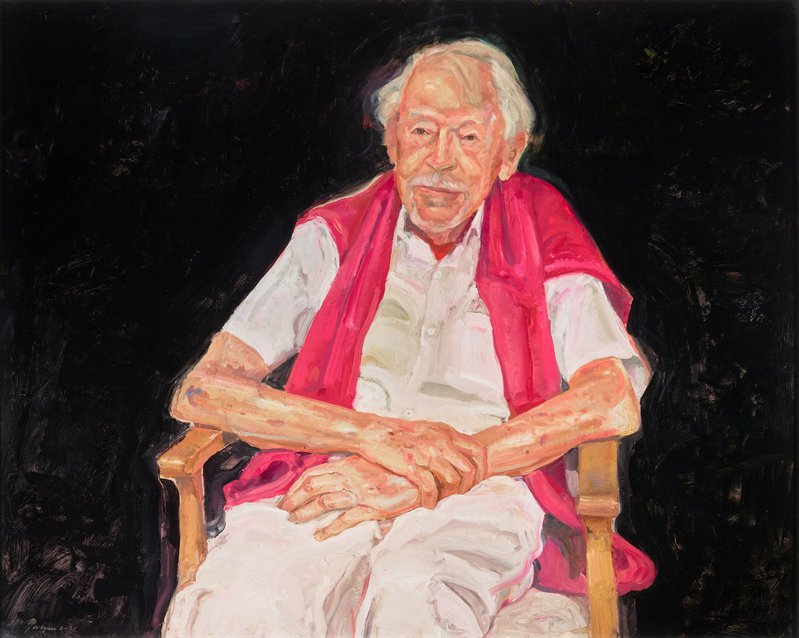 Click here to find out more about The Centenarians.

Tapestry, drawing, etching, bronze, film has, as you might expect, an emphasis on tapestries, which form the central focus of the show. These are always attributed to both Kentridge and Marguerite Stephens, with whom Kentridge has been collaborating since 2001. In an account of Kentridge and Stephens’s process written for this show, Annandale Galleries Director Bill Gregory illustrates the place where Kentridge’s work ends and Stephens’s begins: “Their process involves working from drawings or maquette form by Kentridge which are then woven in wool mohair weft, polyester warp and slit edging.” It’s also important to note, though, that this is not a factory-line arrangement where labour is firmly and fiercely divided; rather, the process is more dialogical, and Kentridge’s imagery is often inspired by the possibilities of the medium as they’re played out in Stephens’s studio. Kentridge collaborates in other media as well: on prints with David Krut, and in his design work for the stage with whole hosts of artists, musicians, and performers. As much as his work is deeply personal, then, it is also often the work of many, which this show wonderfully captures.

Like the warp and weft strands in the tapestries, the myriad frames in his intricate animated films, or the reams and reams of paper that his drawings are on and about, Kentridge’s body of work is dense, multiform, and endlessly variable. That this exhibition’s title is a list of forms is, then, totally apposite: what better than a list to indicate a movement (of the hand, of the story, and of a vision) on and on, multiplying, without any limit, perhaps, but time? Occupying both of the Derby Street spaces at Australian Galleries, Melbourne, this exhibition captures, intimately and expansively, the spirit of one of the most prolific artists working across the world today.

To read the full article, visit the Artist Profile website. 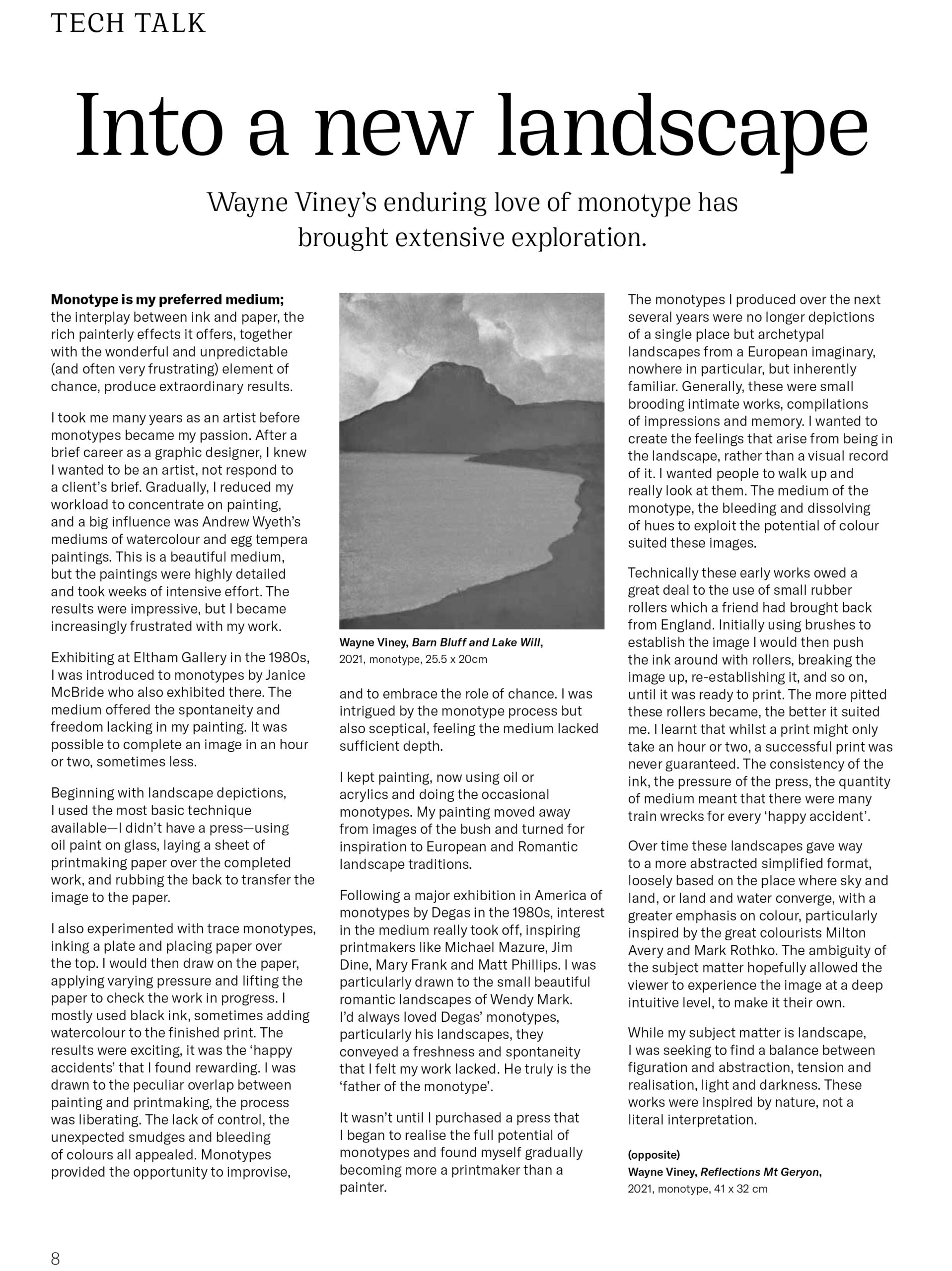 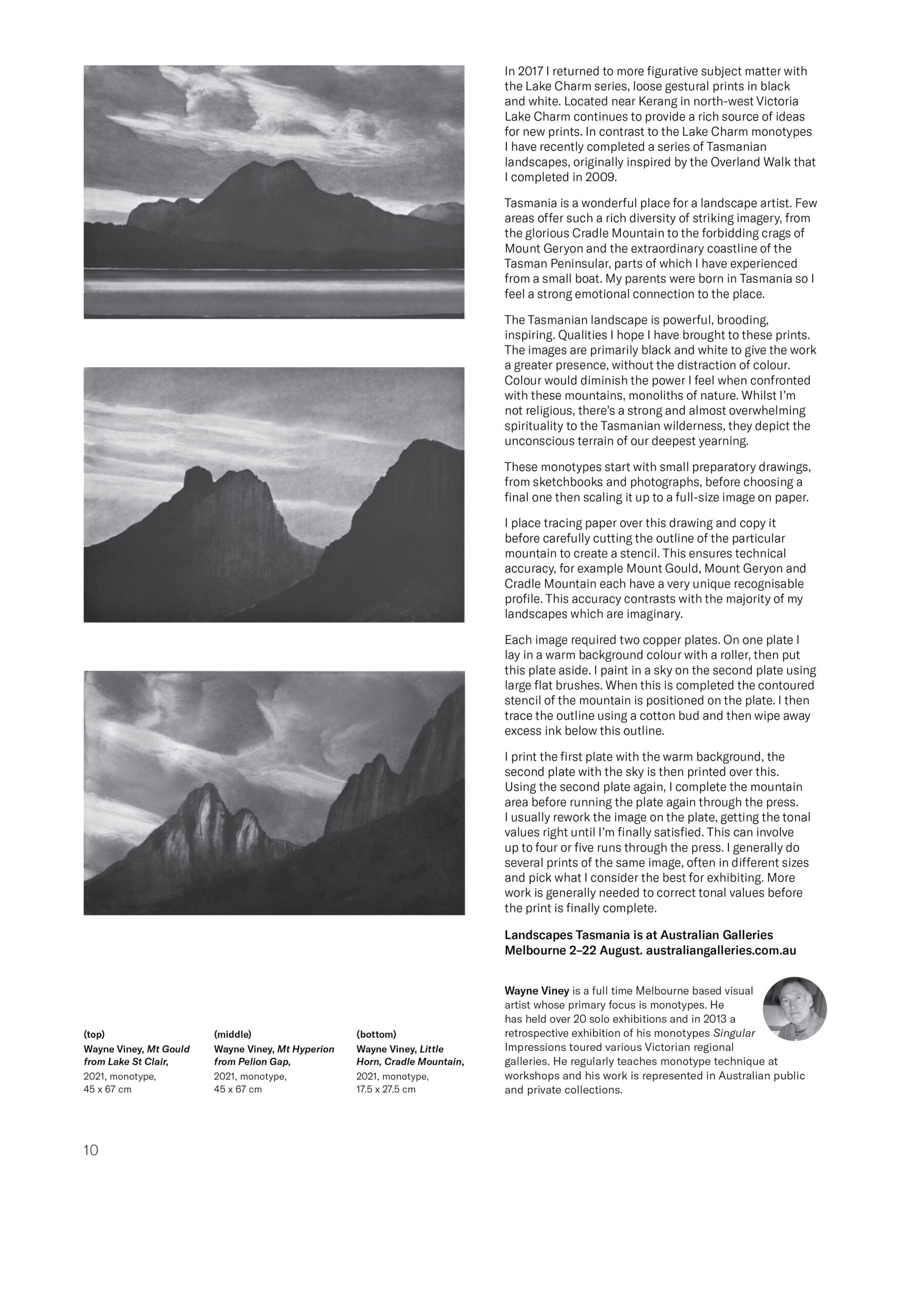 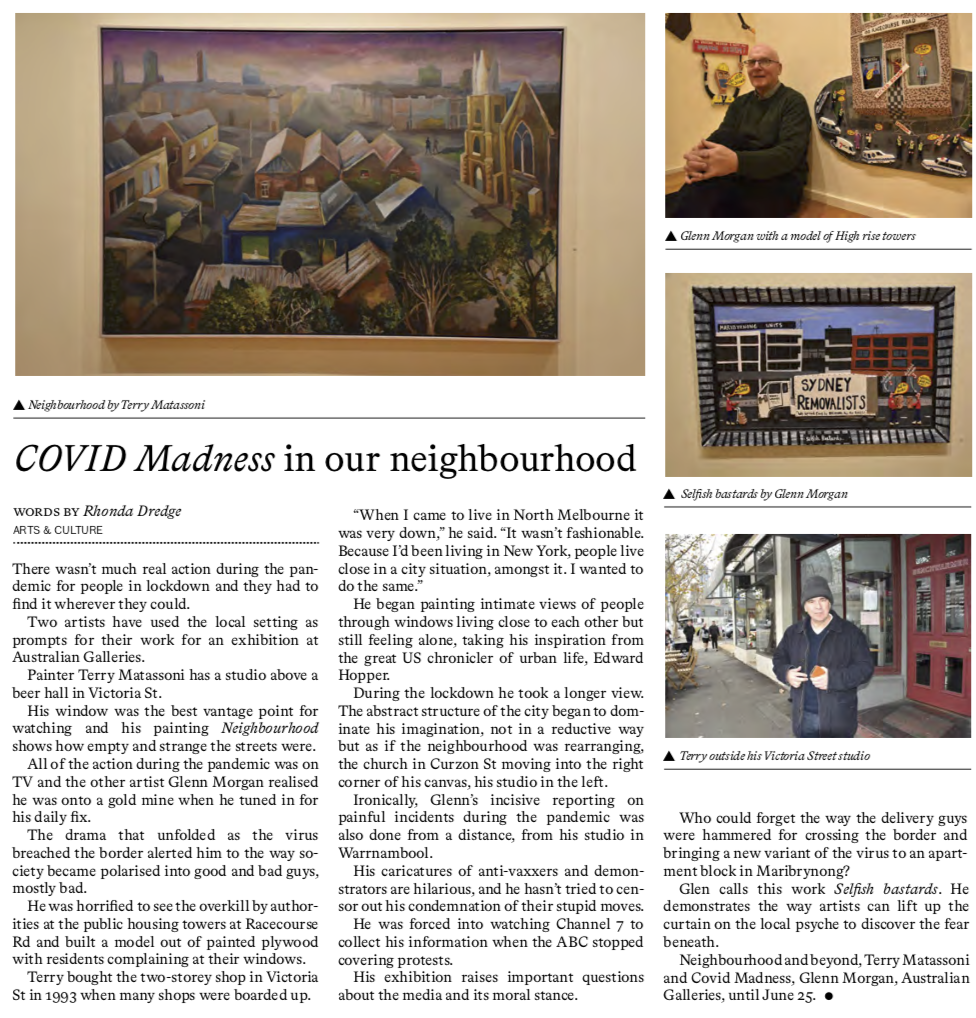