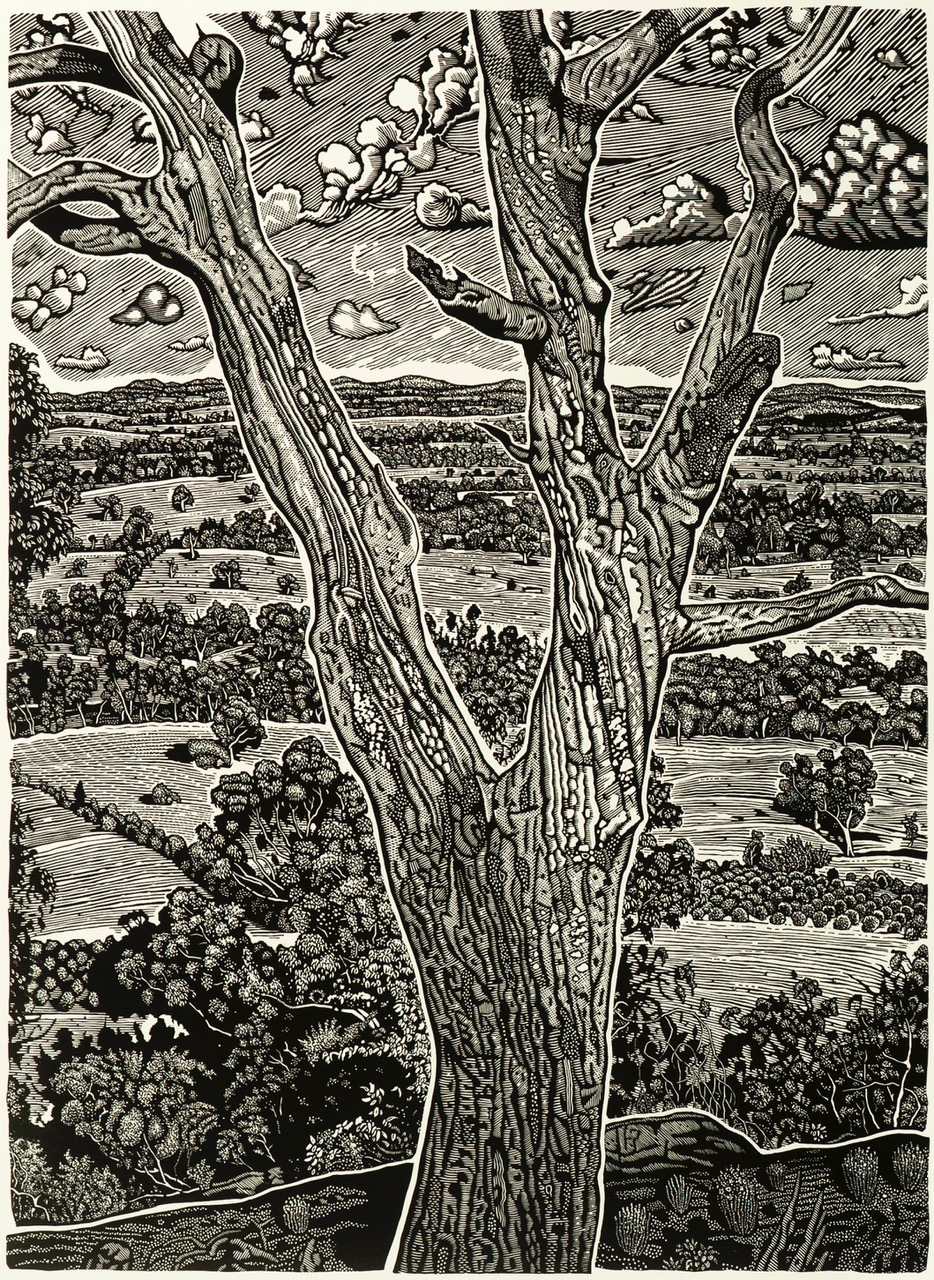 David Frazer speaks to James Noonan from Imprint Magazine about his latest exhibition ‘The Tangled Wood‘.

Now exhibiting at Melbourne’s Australian Galleries, Victorian multi-disciplinary print artist and technical mastermind David Frazer has been hard at work on new wood engravings, minutiae-filled etchings and his classic hyper-detailed linocuts. Often using remote, expansive rural settings and lone figures, Frazer’s work quietly pushes an abstract and introspective narrative with every image. When they do appear, his figures tend to echo the state of the natural world around them, those of ageing, stress, fatigue, stubbornness and peace.

In the lead up to the exhibition,The Tangled Wood, Frazer has delved into etching further than previously, a method easier to produce than his large-scale time-consuming linocuts, but much more tedious to print. Works such as All the Trees Above and The Tangled Wood do away with the figure completely and give way to unbridled nature: twisting roots, sweeping winds and bottomless complexity. It’s the balance between obsessive detail and overall simplicity that makes Frazer’s landscapes appear to breathe and tell a story. The trees have character, and ache to tell the tale of a past storm that dropped some boat in the middle of nowhere, abandoned by its owner.

“I did do another linocut recently as the last thing for my upcoming show and I actually did quite enjoy it,” Frazer says. “But it did take ages, and it was only small.” In 2016 he produced the 120 x 180 cm linocut Slow Boat, dedicating months of brutally patient etching work on hand and knee and earning him the Burnie Print Prize people’s choice award in 2017. “It was just too big,” he says. “My joints are still recovering.” Currently a print of Slow Boat sells for around $4000.

The coming show will feature old and new works, but only one piece features his trademark country bloke: a small wood engraving. “It’s mostly nature but I need a narrative to be interested, so I basically think of the trees as people,”  Frazer says. “Tangled wood, tangled life. Wounded wood, the wounded damaged, flawed man. It’s all essentially the same old thing; just confused, hopeless, exhausted, bewildered men.”

As Australian journalist Martin Flanagan writes: “Perhaps the clue to David Frazer’s art is the figure that occasionally appears on the rooves of his houses, arms spread, imitating flight, wanting to leave a landscape he is nonetheless planted in.” This rings even truer today. In his current group of works, Frazer’s figures are embedded even more deeply in nature, to the point where we see no person in 2017’s Wounded Wood II, only a fallen tree appears to almost grovel while the others silently watch on. Even without explicit characters, Frazer encourages history and narrative with nothing but bark, grass and sky.

Frazer tells stories in handmade book form, too, producing them in collaboration with songwriters, using their lyrics to tell a story in conjunction with a series of prints. In 2014 he worked with Paul Kelly to create Little Aches and Pains, and again in 2017 with Cold Chisel writer Don Walker for Pools. About a year ago he was given the go-ahead to start his next one using the 2001 Nick Cave & The Bad Seeds song Love Letter.

“Funny thing is, each book I’ve ever done is exactly the same story no matter who wrote the words, it’s just a hopeless bloke reminiscing about when he had a girlfriend. But it’s great now I’ve finished this show, and hopefully it goes well because then at a sort of relaxed pace I can get on with this book and hopefully get it done by the end of the year. I want to make this one the most depressing one I’ve ever done.”

So far Frazer has completed two engravings for the book, with thirteen more to come. From there, the thousands of original prints will be run, typesetting will be done and his fellow master artist and friend, book-maker George Matoulas, will once again handle the expert construction. “Books are harder to sell than they used to be,”  Frazer says, “which is a real bummer because I really love doing them.”

In February 2020 Frazer will exhibit at Beaver Galleries in Canberra, “this time in the big room”. Then in July he will set off for South Korea for the Woodcut/Linocut Biennial, where he has sent ahead works by master printmakers Dianne Fogwell, Heather Simmen and Cairns youngster Danny O’Shane, all artists with a similar avidity for nature and its endless creative inspirations. Finally in September next year, he will trek to Greece’s Skopelos Island, where he will run an art workshop.

The Tangled Wood is at Australian Galleries, 35 Derby St Collingwood, until 16 June. 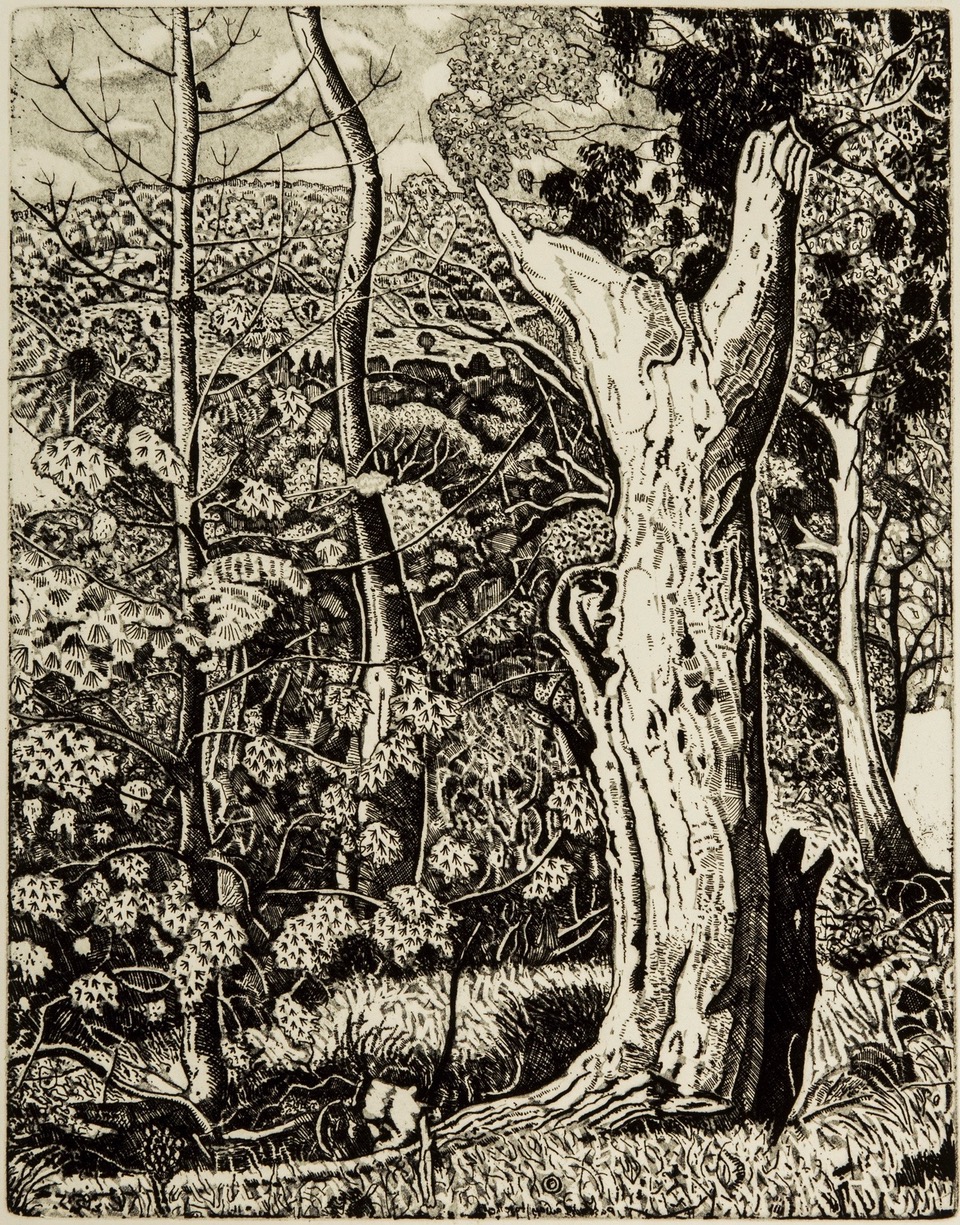