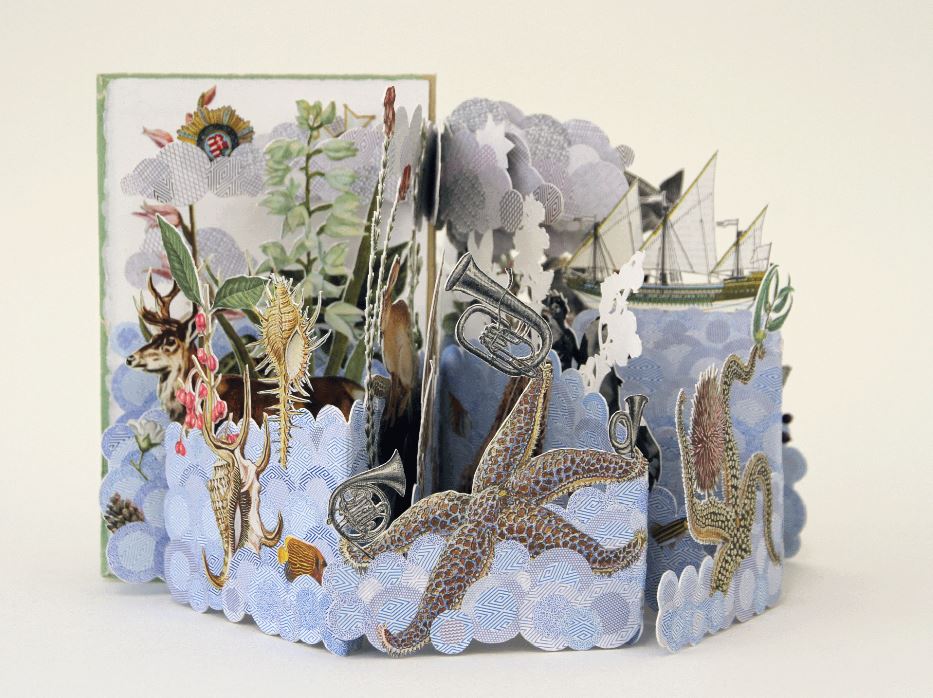 Following an overwhelmingly successful launch at the prestigious M. K. Čiurlionis National Museum of Art in Kaunas, Lithuania, Jazmina Cininas’ solo exhibition, Eglė and the Iron She-Wolves has recently toured to the Sofijos Festivalis in Kuliai, and has now opened at Čiurlionis House in Vilnius, Lithuania.

As the Melbourne-born daughter of Lithuanian refugees, Jazmina still identifies strongly with her ancestral heritage, incorporating many Baltic motifs and themes into her work. For over two decades, Jazmina has been creating linocut portraits of female werewolves from throughout history and has more recently begun creating artists’ books from found materials such as used business envelopes, redundant encyclopaedia illustrations and packaging, recycled into narratives of transformation, migration and re-imagination.

Jazmina’s depiction of female werewolves are distinct in contrast to the usual European mythology, in which werewolves are presented as male. Similar stories about women are difficult to find. The artist’s study of female werewolves, and resultant portraits, were the subject of her PhD dissertation, The Girlie Werewolf Hall of Fame: Historical and Contemporary Figurations of the Female Lycanthrope, completed in 2014.

Eglė and the Iron She-Wolves is a touring exhibition, which presents a survey of Jazmina’s female werewolf portraits alongside her more recent artists’ books. Source material for the books was largely gathered during a 2017 residency at the Estonian Printing and Paper Museum in Tartu, supplemented by decommissioned books from the Melbourne-Lithuanian library, and the steady stream of bills from the artist’s letterbox.

The exhibition at Čiurlionis House is current until 4 September, and forms part of the lead up celebrations for Vilnius’ 700 year anniversary. For more information, click here.