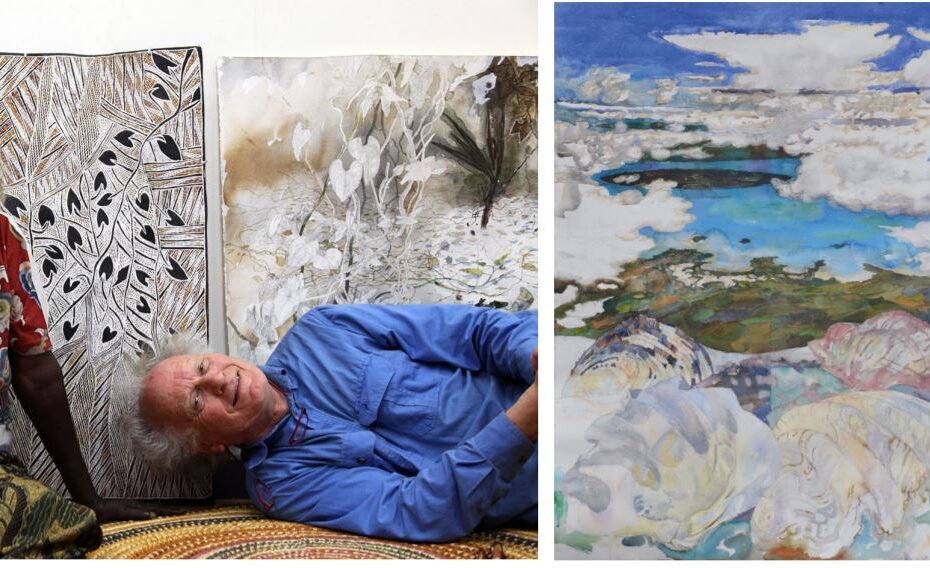 John discusses his latest exhibition ‘Two old artists looking for shellfish‘ in collaboration with Mulkun Wirrpanda at Australian Galleries and his love for shellfish and the living dynamic of the mangrove swamp.

This is the fourth exhibition in which John Wolseley and Mulkun Wirrpanda have joined forces to make work about the living world of East Arnhem Land. It all started when they first met on Mulkun Wirrpanda’s clan lands in East Arnhem Land back in 2009 and started to make work about the edible plants of the region. This led to the creation of the work for the huge immersive installation Midawarr/Harvest shown in 2018-19 at the National Museum of Australia and now touring around Australia.

And now we see how they turned their attention towards the marine world – to the tidal reaches and mangrove swamps of the Arafura Sea. There are sculptures, woodcuts and huge watercolours of the sea shore and mangrove swamps by John. Bark paintings on the walls of the gallery surround a veritable forest of magnificent Larakitj (memorial poles) by Mulkun.

At the end of the gallery there is a wunderkammer – a cabinet of wonders made by Linda Fredheim. This includes a Beetlearium enclosing the slabs of wood in which live the beetles and their grubs. During the exhibition these grubs will be munching their way through the wood thereby making the engravings which are also hung around the gallery.

John thinks that this strange obsession was set in motion in 2009 when Mulkun adopted him as her wawa or brother, and gave him the name of Läŋgurrk – a larval grub which lives in mud and the wood of trees. This led him to the other beetle species which live within the Mangrove trees of Arnhem Land as well as the shellfish which cling to their trunks and branches.

There is something incredibly romantic about all this – two brilliant senior artists, one Indigenous and one from the other side of the world, coming together to share their life time obsession with the natural world. And both doing so with a passion to reveal the importance of these threatened natural systems before it is too late.

Mulkun Wirrpanda is a senior elder of the Dhudi-Djapu clan of the Dhuwa moiety and is the daughter of the great Yolŋu leader Dhåkiyarr Wirrpanda. As one of the eldest and most knowledgeable of the Dhudi-Djapu clan from Dhuruputjpi, Mulkun is recognized as a leader and is one of the few Yolŋu women to have this status. Mulkun is an exceptional artist, painting on bark, larrakitj (memorial poles) and yidaki (didjeridus) and is a talented carver, weaver and printmaker. Her work has been exhibited throughout Australia and in Asia.

Pictured above: Mulkun Wirrpanda and John Wolseley with their respective ganguri artworks, photograph by Joseph Brady