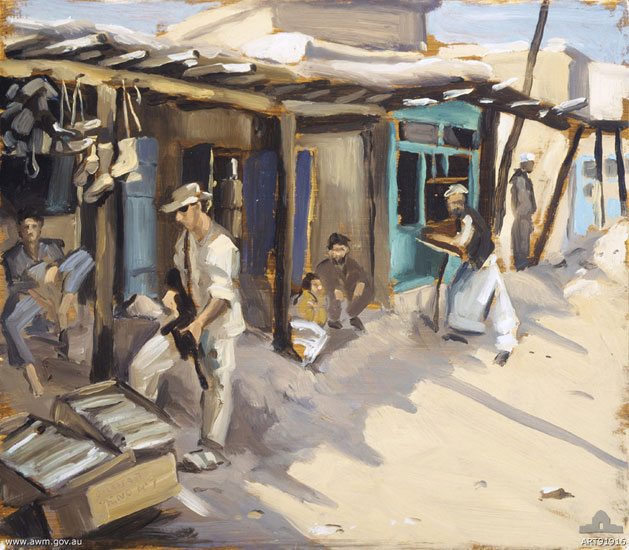 Image above: Peter Churcher  SAS soldier in the Village of Bagram  2002  oil on hardboard  35 x 40 cm. Courtesy of the artist and the Australian War Memorial.

Australia’s Official War Artists have condemned the the punitive treatment of a fellow artist currently held in detention.

Peter Churcher (Official War Artist, Middle Eastern Operations, 2002) and Lewis Miller (Official War Artist, Iraq, 2003) are signatories on an open letter in support of Farhad Bandesh. Bandesh is a refugee currently being held in the detention facility known as MITA (Melbourne Immigration Transit Accommodation) whose art has helped him survive seven years of imprisonment and whose materials are now being arbitrarily withheld.

Since its founding during the First World War, the Official War Art Scheme has deployed artists into conflict zones and peacekeeping missions alongside the Australian military. As artists chosen by the state to humanise the experience of war, the signatories voice their rejection of the state’s attempt to dehumanise asylum seekers like Farhad who have fled violence, poverty, and persecution.

Farhad came to Australia in July 2013 to seek asylum. He was exiled to Manus Island until July 2019, when he was transferred to Australia for medical treatment under the Medevac law. On 23 April, 2020, as reported by Amnesty International Australia, Farhad was abruptly moved from the Mantra Hotel in Preston to MITA without his art materials and other personal belongings. The forced relocation took place just days after Farhad appeared on national television to raise questions about the safety of refugees and asylum-seekers in detention. His requests to have his materials returned—including books, drawing pencils, brushes, and paint—have been repeatedly denied.

The independent statement, published via the National Association for the Visual Arts on World Refugee Day, questions “Why withhold art materials? They are not illegal or unsafe. The threat lies, instead, in the ability of art to challenge injustice, the power of a free voice in an unfree system…A paintbrush can be a lifeline for a prisoner.”

Image below: Lewis Miller Mine clearing at Al Faw, Iraq  watercolour, pencil on paper  40 x 30 cm. Courtesy of the artist and the Australian War Memorial. 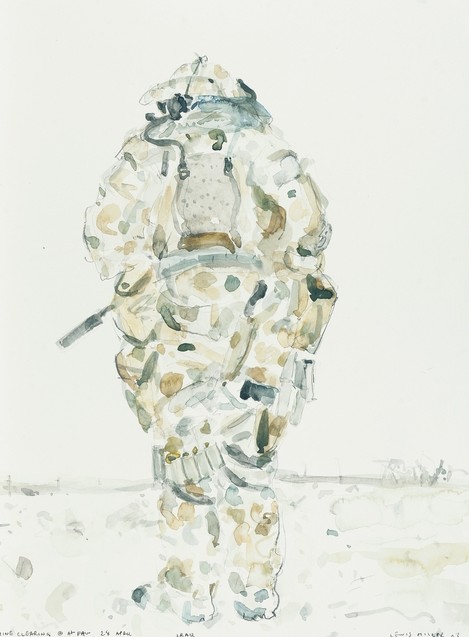