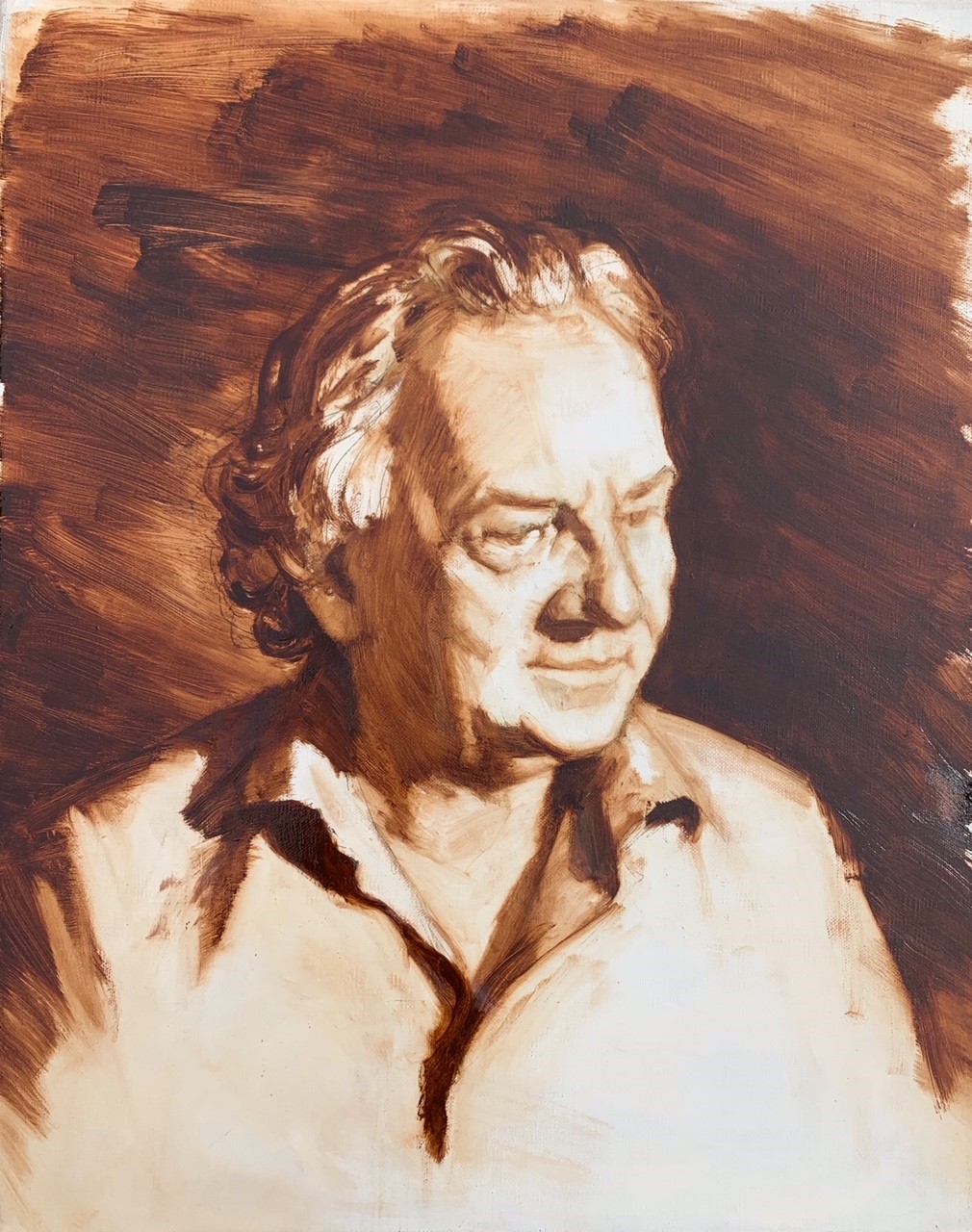 Congratulations to Michelle Hiscock, who has been selected as a finalist in the 2020 Portia Geach Memorial Award for her painting of author Louis Nowra.

The Portia Geach Memorial Award is Australia’s most prestigious art prize for portraiture by women artists. The Award was established by the will of the late Florence Kate Geach in memory of her sister, Portia Geach. The non-acquisitive prize is awarded by the Trustee for the entry which is of the highest artistic merit, ‘…for the best portrait painted from life of some man or woman distinguished in Art, Letters, or the Sciences by after any female resident  who was born in Australia or was British born or has become a naturalised Australian and whose place of domicile is Australia’.

To keep up to date with this year’s prize visit the website.

Having a sitter come to the studio on a regular basis is a luxury, so I’m always on the lookout for interesting people who live nearby. No-one could be more interesting than Louis Nowra. His astounding literary output speaks for itself and his life experiences are as colourful as his stories. But it was his free-thinking way of looking at the world which appealed to me the most.

One of the nice things about painting a writer is that it prompts you to read their work. Louis’ essay in The Australian on being a flâneur and what he called ‘deep walking’ struck a chord with me; he describes becoming aware of how differently people see the world around them, in this case Kings Cross, our local area.

Embarking on a portrait is itself like taking a walk in an unfamiliar city and the impression which is ultimately recorded can surprise us. I didn’t expect the faintly smiling Buddha-like expression that emerged in this painting, especially after some of the darker tales from Louis’ early life, but it felt exactly right.

Michelle Hiscock trained at the Canberra School of Art, Australian National University, graduating in 1991. Her early work, of small but powerfully evocative landscapes, was well received by both collectors and critics, and she has continued since then to develop her pictorial language, exploring the traditions of classical landscape from a contemporary perspective. Both her practice and her research have informed the lectures and master classes for which she is widely known at the National Art School and the Art Gallery of NSW.

Michelle has lived in Japan and France and travelled widely in Europe and especially Italy. She has held solo exhibitions in Sydney, Melbourne and Adelaide, and has been a finalist in several prestigious art prizes such as the Portia Geach Memorial Award, NSW Parliament Plein Air Painting Prize and Gallipoli Art Prize. Michelle was awarded the inaugural artist in residence at St Albans in NSW, and has taken part in group shows around Australia as well as in London and Switzerland. In 2017, Hiscock travelled with a group of 12 artists to the Western Front, which resulted in the NSW regional touring exhibition Salient: Contemporary Artists at the Western Front. In 2019, Michelle held her first regional solo exhibition at Shoalhaven Regional Gallery titled ‘Two Rivers’.

To view available paintings and works on paper by Michelle Hiscock, please visit the stockroom.