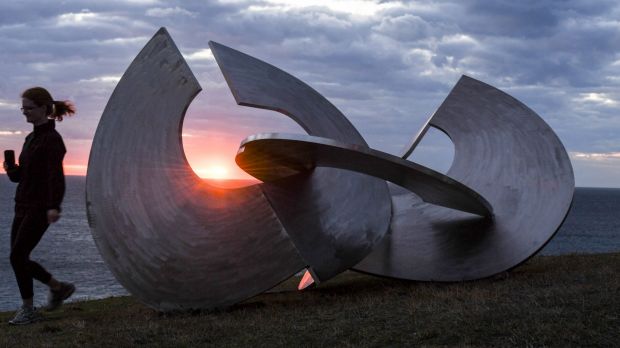 On the shores of Bondi Beach a dawning sun peeked pink on the sculptural form of three orbiting silver discs, one that its maker, the renowned Australian sculptor, Inge King, will never see in-situ.

The pioneer of contemporary sculpture died in Melbourne in April, “half way between 100 and 101”, having designed one of the crowning glories of the Bondi-to-Tamarama Sculpture by the Sea walk, one of Sydney’s most widely attended, outdoor cultural exhibitions.

“She would have been thoroughly delighted and said, ‘It is about time’,” Australian Galleries’ director Stuart Purves said, admiring the six-metre-high sculpture, one of two brought from King’s garden studio in semi-rural Melbourne to sun-bleached Bondi.

“She was really about beauty, seriousness and integrity, and this work shows an incredible sense of freedom and broad thinking at that stage of her life; it is like talking to space.”

Constructed of polished stainless steel with three intersectional rings, King’s Celestial rings I, and a sister work, Link III, also on public show, embody all that King thought sculpture should be: large-scale, exuding strength, movement, light and power and yet simple in its execution.

“She was a remarkable person in that she was working in Australia in the wilderness in the early days when sculpture was not recognised and understood, and got recognition late in life when in her 70s,” Purves said of the woman he knew for 35 years. “Sculpture by the Sea approached me. The whole thing is about honouring her importance in the art world, and her age and stage.”

King’s two works join those of more than 100 featured artists from 17 countries to be showcased in the walk’s 20th year.

From the collective behind the 22-metre-tall bamboo tower exhibited in the forecourt of Sydney’s Customs House for City of Sydney’s 2015’s Art and About, Sydney-based Cave Urban has created a bamboo and steel orb titled The Golden Hour. Appearing from afar as a flat disc, the work takes inspiration from the rising and setting sun, twin spectacles in a day signalling renewal and extinction. The sculpted work was made by lashing lengths of bamboo together with wire ties, harvested a month ago from Peats Ridge, around a frame of prefabricated steel manufactured off site. It’s taken a team of six people more than eight days to install the ball on-site, about 500 man hours all up, according to group member Juan Pablo Pinto. “It’s an organic process but requires a lot of forethought and planning to be able to install the work in such a short timeframe.”

​Ian Swift, who in 2014 recreated an ocean pool from found metal objects and perspex, is back with Detritus Parasitus, a cascading netted wall of discarded objects which comments on the environmental fallout of rampant consumerism. A life-size, stainless steel handbag created by artist Yumin Jing has travelled to Sydney from China via Cottesloe Beach, Perth.

Among the most playful sculptures is a work by Sean Cordeiro and Claire Healy in which an earth mover is adorned with beads, disco balls and smoke machine. It comes with this artist statement: “Everyone wants to go to the party. Nobody wants to stay and clean-up.”

Since 1997, Sculpture by the Sea has inspired 1168 artists to create more than 2000 sculptures. In its 20th year, NSW sculptors Jane Gillings and Richard Tipping will be inducted into the walk’s elite Decade Club, having been selected 10 times for exhibition since The Sea’s inaugural show in 1997.

Reflecting on these 20 years, founding director, David Handley, said the walk had gone from “zero budget” to a government subsidised and sponsored event in which the artist’s installation costs are covered. Each artist receives at least $2000 towards the $10,000 each artist spends on average in materials, fabrication and freight of their sculpture.

Sculpture by the Sea has never been curated to a theme and would continue to support the artist’s right to freedom inventing their own universes “inclusive of all modes of sculpture, demonstrating sculpture’s history and development”, Mr Handley said.