‘No one is ever isolated… even if you only relate them to air… Figures in themselves are only figures and they need to be related, connected. People make contact with things and other people everyday, every minute of the day, so there should be some relationship between the figure and its environment, this is what I’m concerned with.'(1)

Throughout his relatively short life, George Baldessin (1939-1978) set down a singular vision in metal, charcoal and ink. His powerful mark-making and mastery of the printmaking technique was coupled with an acute sensitivity to, and observation of the human condition finding poetry in the inherent tensions of life. Well known for his figurative subject matter, much of the potency and charge of his work stems from the relationship of the figure itself, to others and to its environment. This exhibition explores the figure/space relationship central to Baldessin’s work, one which enabled him to convey both his, and our own, struggle with what it means to live in the world.

At a time when the influence of hard-edge painting and Abstract Expressionism could be keenly felt, figuration remained central to Baldessin’s work. In his search for a unique voice, something on which he placed great importance, Baldessin not only re-assessed the traditional subject of the figure but also the context in which it was presented. Baldessin’s figures are animated by distortion and fragmentation, but of equal importance is the push and pull evident between the figures and the planes that seek to contain, encroach or destabilise them. Indeed in much of Baldessin’s work the power of the fiures (or even the emblems which populate his later work) is emphasised by a considered juxtaposition with their surroundings. Delineated space, however subtle, accentuates the unfolding human narrative. Applause, 1964, presents a single, poignant, naked figure standing awkwardly in the middle of a spotlit stage. The solid block of aquatint above hints at the audience beyond. In works such as Falling Woman, 1964, or Displaced Personage, 1964, the tension of the work lies in the simplicity and power of the oblique and tilted floor plane framing the biomorphic figures. 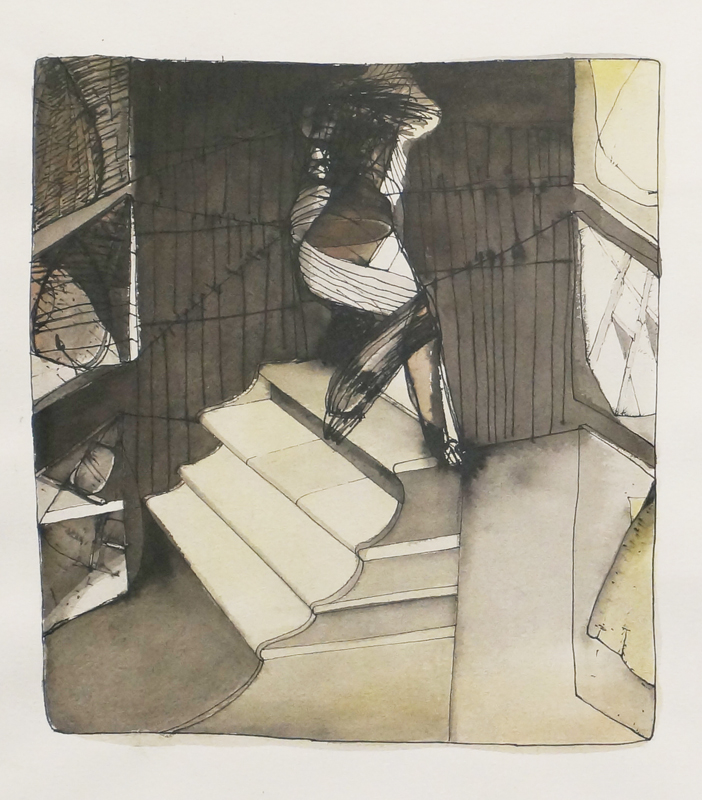 Context and setting exists as palpable force in Baldessin’s work. According to the writing of French philosopher Gaston Bachelard, architecture is a lived experience rather than an inanimate presence. Although it is unlikely Baldessin was aware of Bachelard’s writing, his work shares a similar sentiment. In his seminal 1958 text The Poetics of Space, Bachelard elevated ‘setting to its rightful place alongside character and plot’, proposing that ‘inhabited space transcends geometric space’.(2) Viewed in this context Baldessin’s reductive articulation of space functions as an active, lived architecture, of equal importance to the figure. Having lived in the Italian province of Treviso until the age of nine, the intimate spaces of Venice and its surrounds, the legacy of thousands of years of human habitation, would have formed Baldessin’s known and lived world as a child. In such places human drama is glimpsed or overheard in alleyways through open windows on high, enacted in public squares, or framed by archways or vestibules of churches.

The potency of pared-down architectural devices used by Baldessin are reflective of a broader global trend towards abstraction of which he was only too aware. As artist and friend Jan Senbergs noted, ‘we were figurative artists, but we made allowances. A feeling for abstraction just began to seep into our work at the time.'(3). The theatrical convention of stage design would have also offered solutions for potent pictorial space. Influenced by Fred Williams, who he befriended in the Royal Melbourne Institute of Technology print studios, Baldessin employed theatrical motifs from the circus as a convenient theme with which to test his ideas.

Baldessin converted the articulation of space via the wall, the power of the threshold and a striking use of light – used so adeptly on stage and in film – into line, plane and tone. Dispensing with colour, he exploited chiaroscuro to great effect in his etchings, amplifying the human experience. Resonances can be felt too with the films of Luis Buñuel and Ingmar Bergman, popular amongst Melbourne artists at the time. The practice of being a printmaker-sculptor would also have had a profound influence on Baldessin’s understanding of pictorial space. Moving comfortably between two and three-dimensional works would have provided a fertile testing ground for creating, denying and realising both implied and actual space. 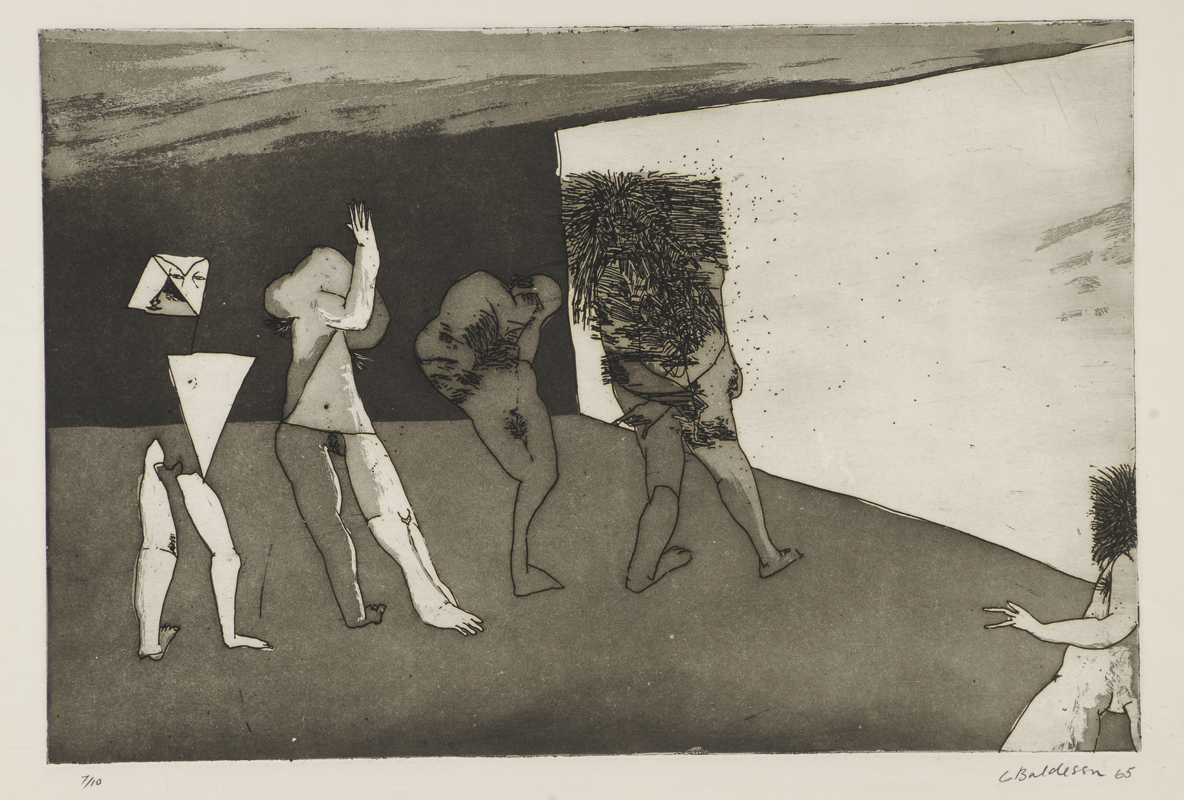 Baldessin’s studies in Europe during 1962-63, under sculptors Marino Marini and Alik Cavaliere, were formative in shaping his understanding of space. Cavaliere’s sculptural tableaux, such as La città di G.B (The city of G.B), 1960, used acute rectilinear planes to foreground his figures. As Baldessin himself noted, this time in Italy taught him that ‘the actual space and the suggested space that you deal with in painting [could] be combined’.(4)

Artists such as Francis BAcon and David Hockney also left a marked impression on Baldessin. Hockney’s individual graphic style and figurative content (evident in work such as his 1960s etching series of six Brothers Grimm fairytales) shows the artist working through similar spacial concerns. Bacon, who Baldessin had met briefly in London, exploited the power of pictorial space, merging it adeptly with psychological space. In BAcon’s works such as Study after Velázquez, 1950, the frames that enclose the Pope restrict him, heightening his tortured confinement.

Rather than this overtly menacing and oppressive function, Baldessin’s distortion, fragmentation and architectural devices are slightly less hostile but equally penetrating. There is instead a humanity and empathy present in his work.

‘What am I trying to express? – I think human weakness through the vulnerable figure without extracting its dignity no matter how uncertain, this is why distortion plays such an important part and the element of drama is ever present.'(5)

As a deeply personal artistic practice, Baldessin’s etchings, lithographs and sculpture appear somewhat biographical, even confessional. Yet paradoxically there is a simultaneous distance. The private meaning is concealed as the works speak through metaphor rather than in specifics, portraying a universal searching and questioning. Through the abstraction of figure and space Baldessin conveyed both his own struggle and movement through the world. We can relate to the bodies that he portrayed. As Christopher Allen noted of Baldessin’s sculpture Trapeze, 1965, we sense its movement, ‘not really visually, but kinesthetically and sympathetically; that is by echoing or simulating the attitude, the movement, the thrust, in our own bodies.'(6) Even if the forms do not accurately represent our physical bodies, they may represent how we feel about them at times. 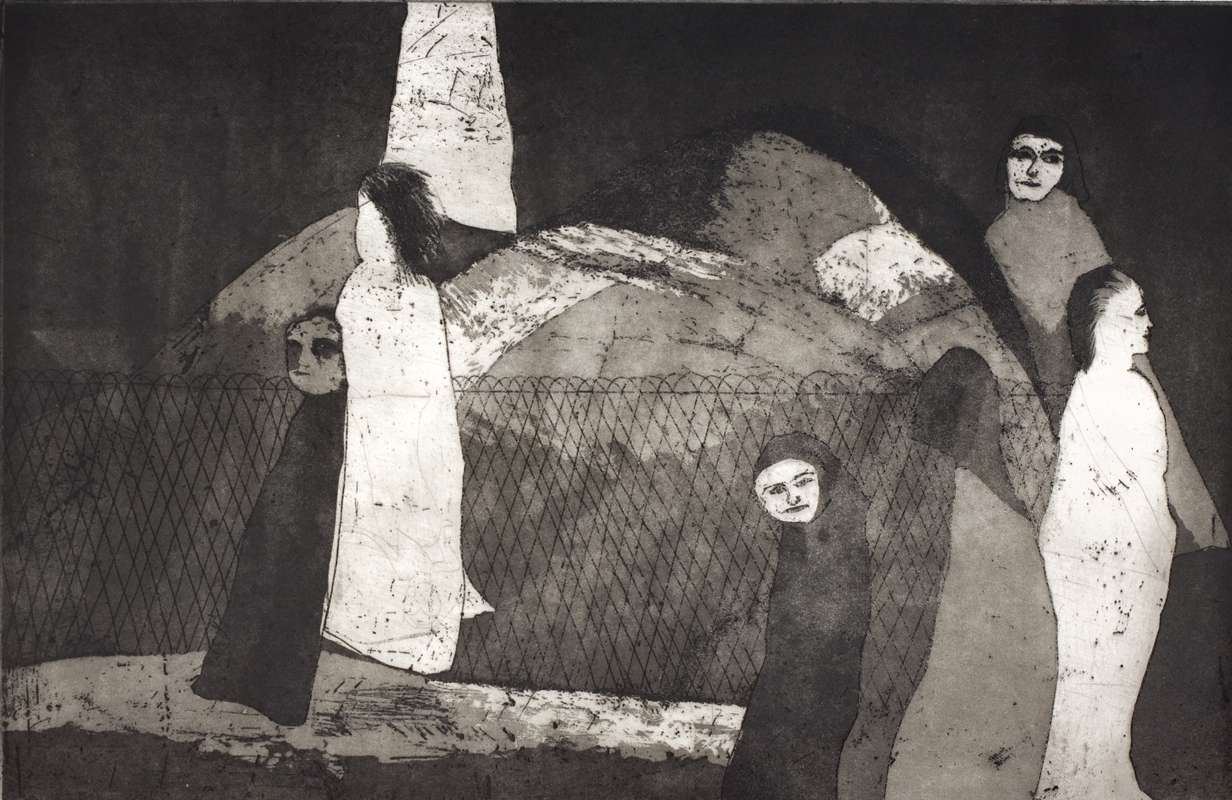 Similarly Baldessin’s use of enclosure and architectural armature is a representation of our lived experience. There is a sense of searching as the artist seeks to find his place. Both his experiences as a child in wartime Italy during the 1940s, and as an immigrant in post-war Australia, must certainly have led to a deep questioning of the world, of people and of reality, especially for an artist as sensitive as Baldessin. As a consequence there is a direct confrontation with the lived experience in the archetypal figures and spaces present in his work.

Int he years before his untimely death, Baldessin did away with environmental props and presented his female protagonist of the 1976 Mary Magdalene series in a completely pared-down composition, acknowledging instead the charge of the void. This is most eloquently described by the Japanese spatial concept of ma – a consciousness of the pause between two musical notes, teh gap between two structural elements, or the interval between poetic verses. The figures float within this void. As in the sensitively rendered drawing (Woman rubbing eyes), [undated’, rather than being simply empty, the potent blue space accentuates the inner struggles of the figure while our eye is drawn to her expressive fingers and lowered eyelids. 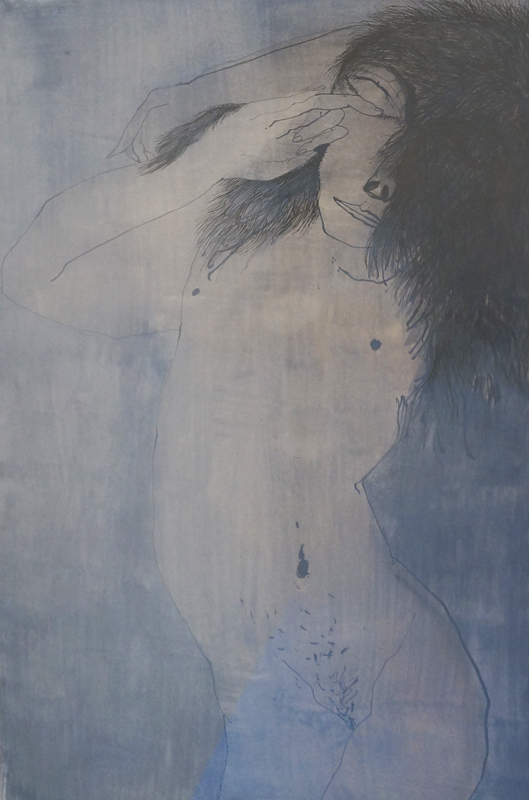 Baldessin’s prodigious output of prints, and to a lesser extent his sculpture and drawing, are akin to a continuous diary or sketchbook, where he sought to make sense of the world. Printmaking provided a rigorous method with which to test his ideas; to scrutinise the contradictory nature of what it means to be alive – to exist as a body and mind, at once separate from, but inextricably connected to the world. It would seem the exploratory nature, rather than other inherent aspects of printmaking (such as its reliable and democratic reproductive qualities) attracted Baldessin. He rarely completed editions, being far more interested in moving on to the next idea. His approach is perhaps best reflected in the works of contemporary printmaker Terry Winters (b.1949): ‘I wasn’t really interested in reproducing anything, I was interested in producing something.'(7)

In the search for his unique voice, much like his early mentor Fred Williams, Baldessin sought a new order and beauty in his work. Line and tone were subservient to his will. But so too were subject matter and technique, for he was, above all, interested in producing Art. Communicating through metaphor, Baldessin directly confronted life and humanity, with all its complexities, ambiguities and tensions, forming poetry out of the discord and contradictions of life. For as Bachelard so eloquently noted, ‘behind dark curtains, snow seems to be whiter. Indeed, everything comes alive when contradictions accumulate.'(8) It is from Baldessin, the printmaker-sculptor, that we are offered an insight into our own place in the world.

B Architecture, University of Sydney Poetic Discord is on show at Australian Galleries until the 23rd October 2016. You can view the exhibition online here.