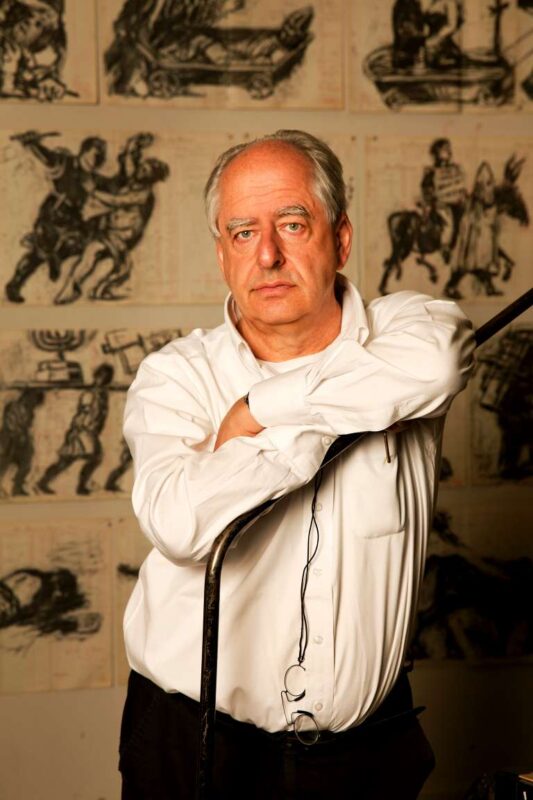 Since his participation in Dokumenta X in Kassel in 1997, solo shows of Kentridge’s work have been shown in many museums and galleries around the world, starting with the MCA San Diego (1998), and the Museum of Modern Art in New York (1999). In 1998 a survey exhibition of his work was hosted by the Palais des Beaux-Arts in Brussels, continuing to museums in throughout Europe during 1998/1999. 2001 saw the launch of a substantial survey show of Kentridge’s work in Washington, traveling thereafter to cities in the US and South Africa. Carolyn Christov-Bakargiev curated a new retrospective exhibition of his work for the Castello di Rivoli in Turin in January 2004, which went on to museums in Europe, Canada, Australia and South Africa. 2009 marked the start of a new large touring exhibition, beginning in San Francisco, travelling to museums in Texas, Florida, and MoMA, New York, before continuing to Europe.

The shadow oratorio Confessions of Zeno was commissioned for Documenta XI in 2002. The installation 7 Fragments for Georges Méliès, Day for Night and Journey to the Moon was presented at the 2005 Venice Biennale. April 2005 saw the premiere of a production of Mozart’s Die Zauberflöte (The Magic Flute) at the Théâtre de La Monnaie in Brussels, with William Kentridge directing and René Jacobs as conductor, touring to cities including New York, Naples, and Johannesburg. In October 2005, the Deutsche Bank Guggenheim in Berlin presented Black Box / Chambre Noire, a miniature theatre piece with mechanized puppets, projection and original music by Philip Miller.

William Kentridge received the Carnegie Medal for the Carnegie International 1999/2000; the Goslar Kaisserring in 2003; and the Oskar Kokoschka Award (2008). He has received honorary doctorates from a number of universities internationally.

Telegrams from the Nose, a collaborative performance with composer Francois Sarhan; and for the Sydney Biennale of 2008, both I am not me, the horse is not mine, a solo lecture/performance piece, and an installation of the same title, comprising eight projections. Among Kentridge’s current projects is work towards a production of Shostakovich’s opera The Nose, to premier at the Metropolitan Opera in New York, in March 2010.

A recent major project was Triumphs and Laments, a Project for Rome. Triumphs and Laments (2016) is a large-scale, 500 meter-long frieze, erased from the biological patina on the travertine embankment walls that line Rome’s urban waterfront. Exploring dominant tensions in the history of the Eternal City from past to present, a procession of figures, up to 10 meters high, represents Rome’s greatest victories and defeats from mythological time to present, forming a silhouetted procession on Piazza Tevere, between Ponte Sisto and Ponte Mazzini.