This must-see exhibition, installed across our two extensive Melbourne galleries includes large scale tapestries dating from 2009 – 2021, several series of etchings, drawings, sculptures and film.   ‘Perhaps no other contemporary artist has been so successful in so many disciplines on such an international scale. His profile is extraordinary, having exhibited in many of the great arts institutions of the world such as the Metropolitan in New York, also directing acclaimed theatre productions and operas, notably Alban Berg’s Wozzeck at the Sydney Opera House in 2018. Kentridge has been innovative in each of the many fields he has chosen. Fundamental to Kentridge’s success has been his ability to collaborate and bring out the best in his collaborators. His closest are with his longtime associates in Johannesburg – artists and craftspeople such as David Krut (printmaking) and Marguerite Stephens (tapestries).Robert Bell, Senior Curator of Decorative Arts at the National Gallery of Australia, wrote in Artonview in 2013, following the acquisition of ‘Streets of the City’ by the National Gallery of Australia: “Kentridge draws connections between the arts of cartography and weaving, both processes built point-by-point along defined axes. He joins choreography and topography in a type of literal street theatre, where allusions to the theatre curtain, propaganda and the disjointed shadows of the homeless and dispossessed as ‘performers’ are reconnected through the courtly, stable and civilizing process of weaving.” Bell shows how significant the process of tapestry weaving is to Kentridge’s ever-developing oeuvre and gives an insight into how they illicit such immediate and intense reactions.’ – Bill Gregory, Director, Annandale Galleries, 2021

Exhibition is across both Melbourne galleries at 28 & 35 Derby Street

All prices are listed in US Dollars 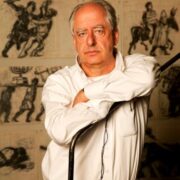