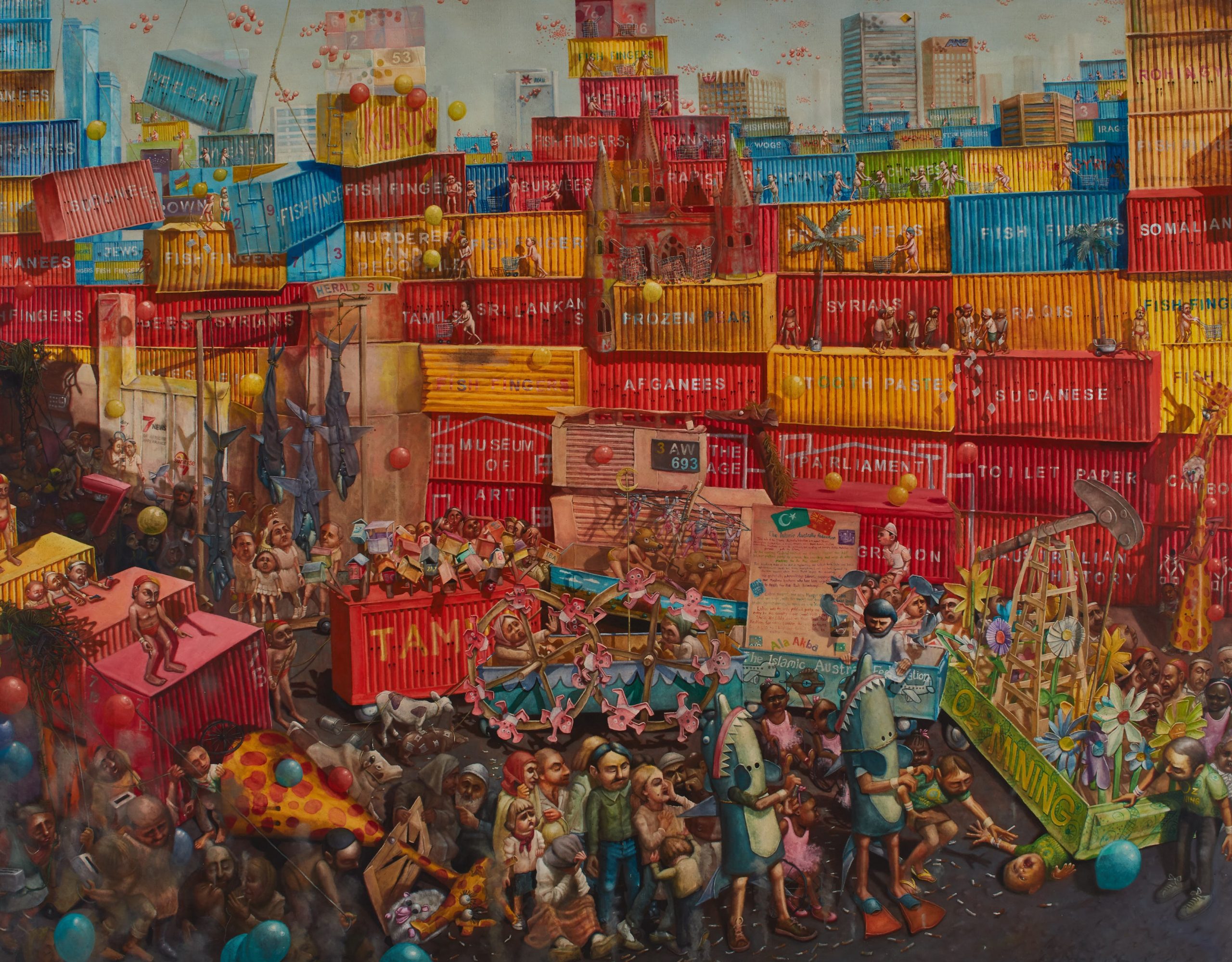 ‘You can’t have Carnival without Lent:

In the Carnival tradition of Louisiana, the annual ball of a krewe – one of the social clubs involved in the parade – is often referred to as a tableau. More colloquially and somewhat archaically, though, tableau can refer to a kind of static image of a moment, often revelatory and involving a multitude of different people engaged disparate activities united in time and place – as in, ‘the party last night was a great tableau.’ The term takes its origin at some unknown point on the cultural/etymological tree from tableau vivant, a visual representation of a variety of people in a static spatial setting. It is tableau that sprung to mind when I viewed Cameron Hayes’ immensely detailed painting ‘The Fight Between Moomba and Lent’, recently on display at the Australian Galleries in Sydney. In the multitudinousness and stylisation of the people in the painting’s intricate scenes, I was reminded above all of the tableau in its New Orleans form. For, usually the greatness of the party’s tableau was not its unadulterated joy, but its full range of beauty and ugliness, ecstasy and despair – the former terms being dependent on the latter, and vice versa.

Hayes’ striking and ambitious painting is visually and titularly evocative of Bruegel’s 1559 The Fight Between Carnival and Lent. Hayes’ imagery links the shipping container – one of the most potent facts and symbols of contemporary political economy and globalisation – with Carnival/Lent. The slash here is important. Shrove Tuesday and Ash Wednesday are mutually reinforcing for those of us who come from cultures and places that celebrate Carnival in its always-evolving creolization of Pagan, Catholic, Latin, and whatever/whomever else. The entirety of the period from Twelfth Night through Mardi Gras depends on the forty days and nights that follow. God – real or proverbial – and her/his wrath – equally real or proverbial – is precisely that which gives the ‘fatness’ of Mardi Gras its meaning and pleasure. Knowing the end/pain/shame is coming whips the frenzy into an ever-higher pitch in the days before the clock turns from Tuesday to Wednesday.

It’s a cultural – in the anthropological sense of meaning-making – cycle and despite its excesses of both pleasure and pain, it’s defined above all else by its sustainability. Carnival, Lent, the quotidian remainder of the year; lather, rinse, dry, repeat. It is a cycle that is meant to ensure the continuity of culture, as in meaning-making (not biologically embodied tradition) and community in its inclusive rather than exclusive form. Still, whatever masks may come off on Shrove Tuesday, they will go back on come Wednesday. The faces we may wear on Mardi Gras day may be our ‘authentic’ selves (whatever that might mean), but social life for three hundred and sixty-four days of the year usually requires at least some degree of sublimation.

Hayes’ contemporary tableau vivant is just such an unmasking but perhaps with an altogether different relationship to the concept of sustainability in our current moment. What makes the shipping container perhaps the most important, unheralded innovation in the era of economic globalisation is the manner in which it allows for a radical abstraction of the commodity and its form (including most especially, all the labour entailed in the commodity’s production as consumable good) on a scale heretofore unthinkable in world history. Containers themselves are abstract – they are specifically designed to be interchangeably shipped and offloaded from physical production to truck to train to freighter to train to truck to point of consumption; to fit on truck beds in Mali, freight cars in Macedonia, and ocean-going freighters docked in Melbourne. Emptied, they are then refilled and sent on their way again, destined for another port/mine/plantation/factory/store/hospital/etc. As a social form, they represent a lubricant of contemporary global consumer capitalism as integral in its functioning as the combustible biological matter, compressed over millennia, the burning of which makes our earth ever warmer and powers the ships, trucks and wagons on which those containers sit.

And so, too, are their contents abstracted. A container is also a measurement or amount. A container’s worth of wheat grown on different farms across the entirety of a continent. A container of laptops, assembled from materials mined in the DRC, smelted in Indonesia, assembled in China, packaged in Mexico and sold in the US (all components shipped within containers of course). A container of processed seafood from dozens of different species and thousands of individual fish, combined and abstracted into single fish fingers. X bushels of wheat = Y computers = Z fish fingers.

The containers in Hayes painting contain such commodities. Toilet paper abstracted – via the labour of tens of thousands of people and 27,000 trees a day worldwide – into single rolls, all more or less undifferentiated. Fish fingers, containers and containers of fish fingers, distilled from the less lucrative catch hauled to shore in one of the world’s most exploitative, unregulated, and environmentally degrading industries.

The containers also contain people. Sudanese and Syrians and Somalis. Iraqis and Italians and Iranians. Via the logic of the container, internally and externally undifferentiated – in value or selfhood – just as one fish finger is from another.

In the midst of the containers we have a brilliantly and strikingly detailed tableau vivant of Carnival and countless references to specific moments of Australian political and social history. Like any carnival parade and indeed, Carnival itself, movement is paramount. The parade-goers are moving forward, toward lent. As an unnamed woman taunts John Rechy’s semi-autobiographical gay hustler upon his arrival in New Orleans in his 1963 novel, Carnival is all about the removing of masks, not the donning of them. If she’s right (and to me, she undoubtedly is), then Hayes’ tableau of Carnival literally framed by containers and their contents present a disconcerting vision. Indeed, Hayes removes the mask, but what is revealed is not a diverse multitude of individuals in all their beautiful perversity and perverse beauty providing good tableau. Rather, it is a world scaffolded by abstracted commodities and abstracted humans, X fish fingers = Y Afghanis = Z toilet paper rolls. Refugees of imperialism (economic and other), war, and climate change; the products of fisheries dying their final deaths in a rapidly warming ocean and forests never to be regrown.

Lent is coming. Next year’s Carnival is not as certain.