Finalists in the 2020 Libris Awards 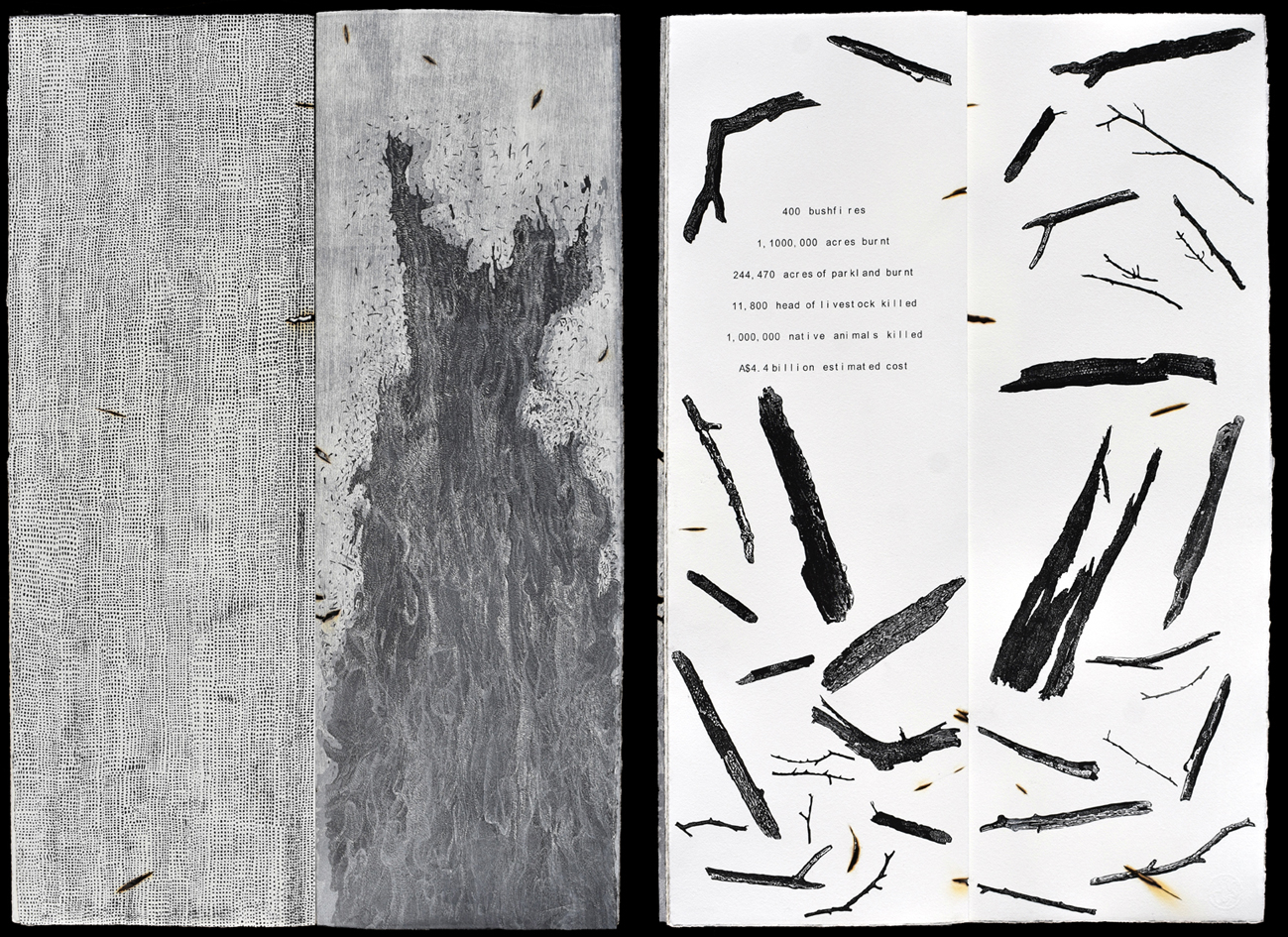 Congratulations to our artists Dianne Fogwell, Jazmina Cininas, Martin King & Glenda Orr who have been selected as finalists in the 2020 Libris Awards: The Australian Artists’ Book Prize at Artspace Mackay.

Since opening its doors in 2003, Artspace Mackay has been dedicated in its exploration and support of the artists’ book medium. The Libris Awards play a significant role in showcasing the very latest and best in contemporary artists’ book practice in Australia. The award has three prize winning categories;

This year the award will be judged by Des Cowley, Principal Librarian, History of the Book and Arts at State Library of Victoria, and Robert Heather, former Director of Artspace Mackay who founded the Libris Awards in 2006 to support the growth of the gallery’s artists’ books collection.

Due to the extraordinary developments that continue to unfold, exhibition dates and announcement of winners may be delayed. Visit the Artspace Mackay website and subscribe to their eNewsletter for the most up-to-date information.

“Arsonists are unnatural terrorist of the environment causing around 30,000 bushfires yearly. This artist book contemplates one of Australia’s worst bushfires, “Black Saturday”. An inferno of destruction that caused 210 deaths, 2,000 lost homes, left 7,500 homeless, burnt 4000,000 hectares and killed around 1,000,000 animals. History repeats but do we learn?” – Dianne Fogwell

Dianne has a long list of national and international solo and group exhibitions. Recent awards include the national 2017 Geelong Print Prize and 2017 Banyule Award for Works on Paper. She was recently the Grand Prix Winner, Ukraine for her artist book “Emu”. Dianne was the invited International Juror for the 7th Bahart Bhavan International Biennial of Print, Bhopal, India and recently for the 2018 New Zealand Print and Painting Award. She has been an invited artist to international biennials for print and the artist book in Poland, Belgium, Belgrade, France, London and most recently China and Portugal.

To view available works by Dianne, visit our stockroom gallery. 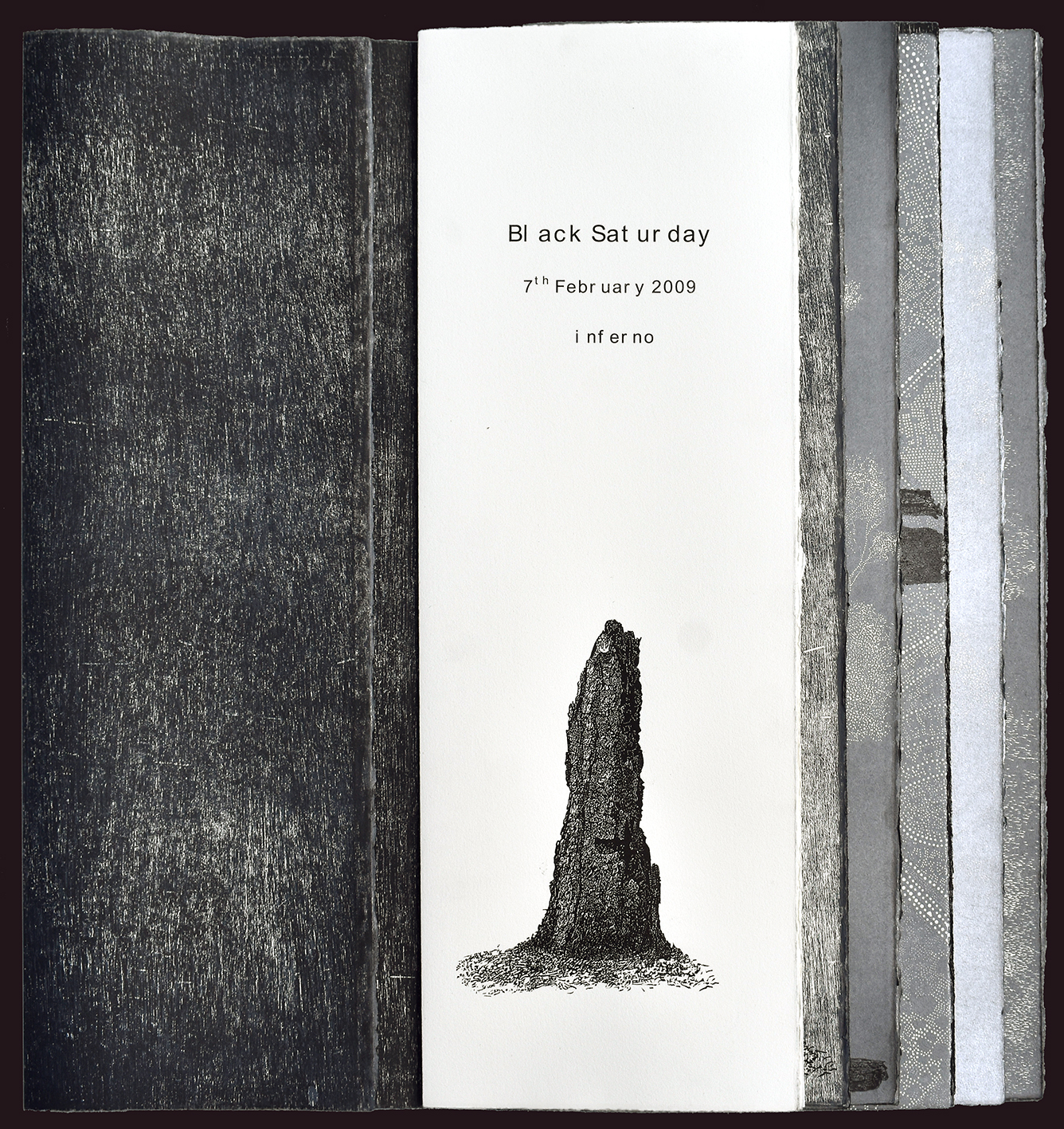 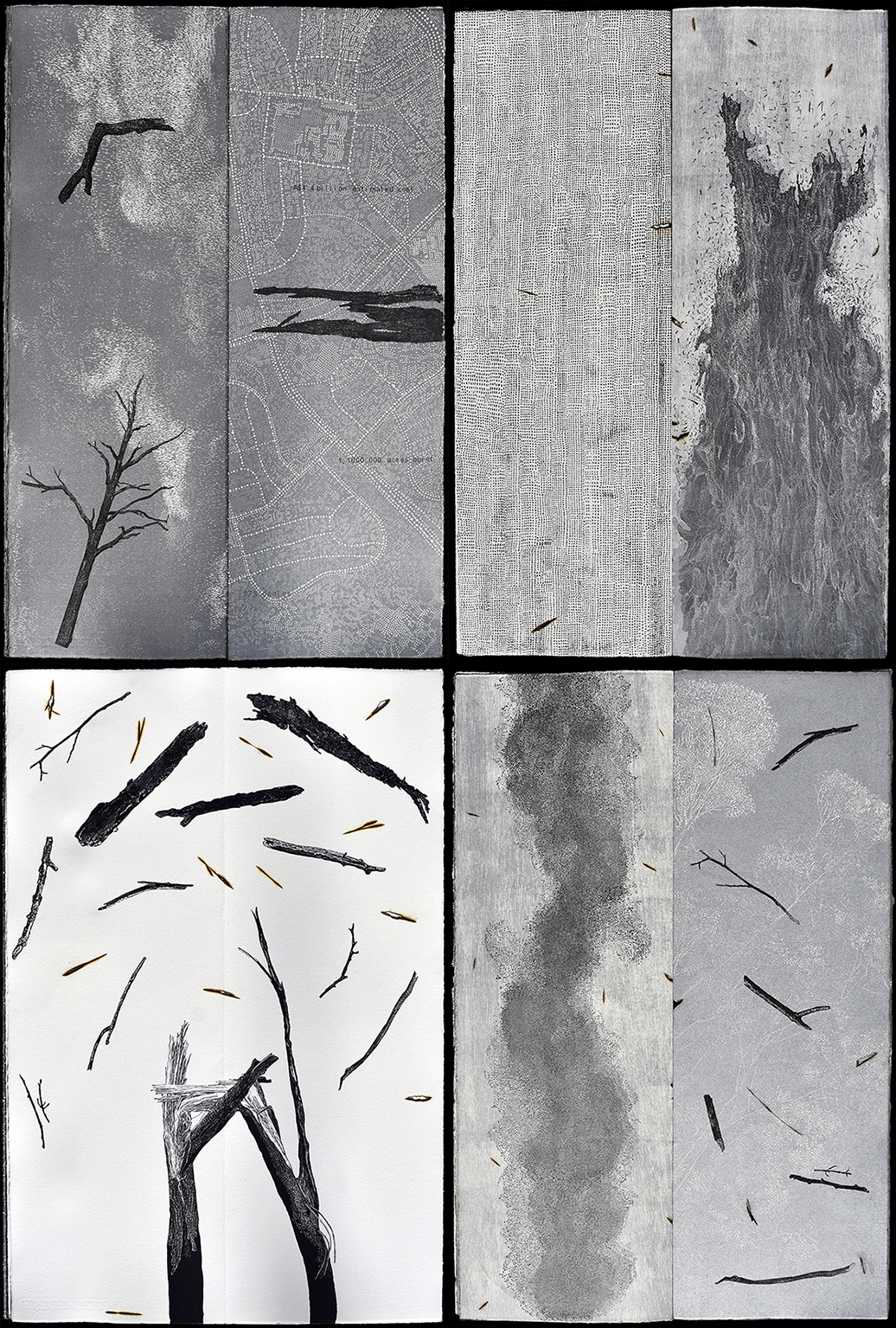 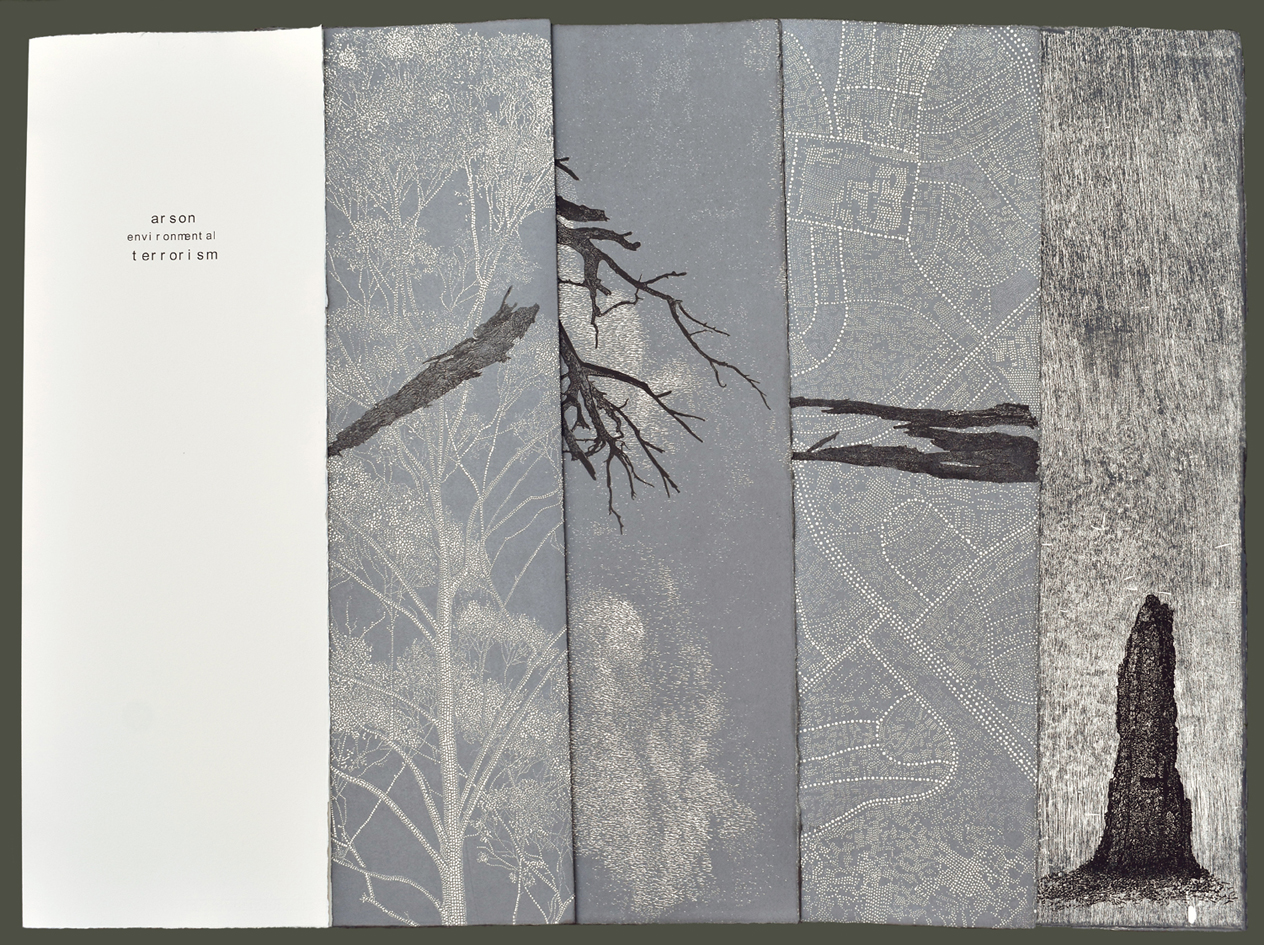 Martin King’s wide-ranging art practice is underpinned by an abiding interest in the Australian landscape, most visibly by making connections between land, sea and air. King’s earlier works on paper traced the movement of rain shadows and the effect of weather patterns across undulating terrain and vast tracts of desert. His more recent works express the fragility of our relationship with nature using creatures of the sky as simple motifs that convey a paradoxical vision of the Australian landscape as both tranquil and unsettling.

To view available works on paper by Martin King, visit our stockroom gallery. 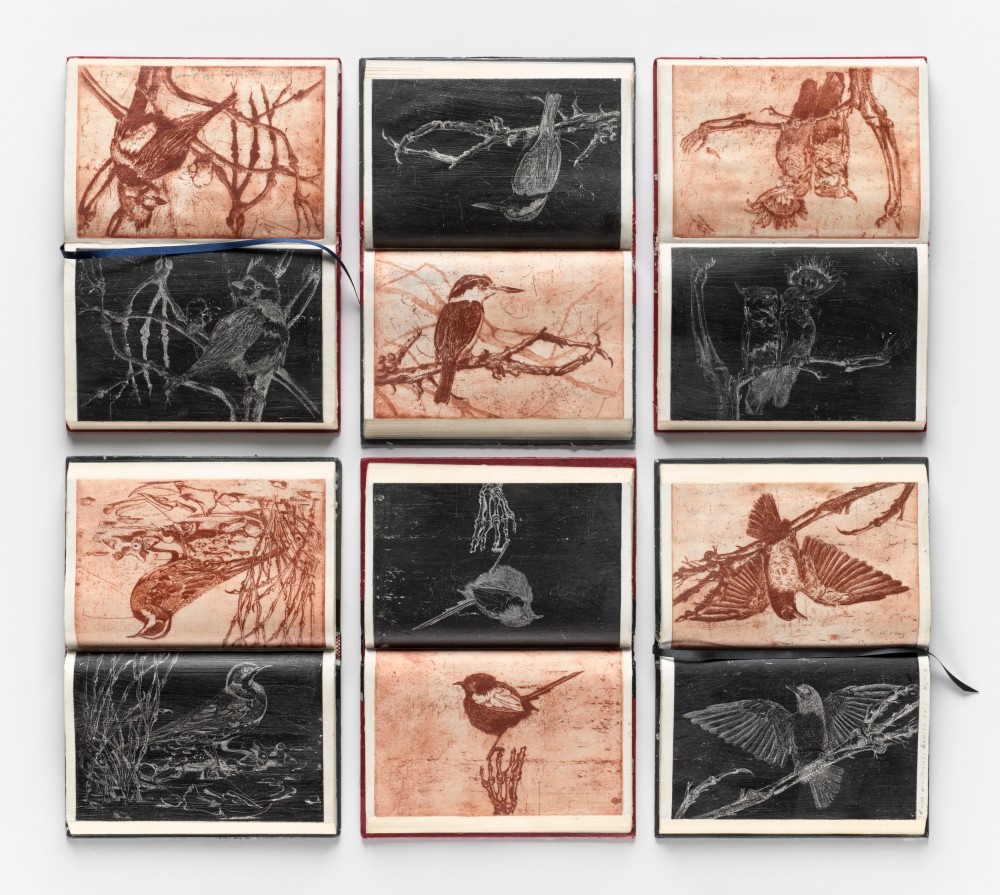 Glenda Orr’s art primarily focuses on critically engaging with issues and concepts of biological diversity, human ecology and natural ecosystems, particularly forests and woodlands. Her love of the ‘bush’ stems from her childhood spent playing in the dry sclerophyll forests on the steep gorge banks of the Georges River in southern Sydney.  This love of the natural world and curiosity as to how it worked, led to her careers as a research biologist and then, natural resource policy analyst. Glenda also spent much of her spare time in the later 1980s and 90s volunteering as an environmental activist, especially working with the Forest Campaign Group of the Australian Conservation Foundation on the South- East Forest campaign in NSW.

Throughout her life, Glenda has loved drawing, printmaking, fabricated sculpture and photography, taking part-time classes where possible. Finally in 2002, when she moved from Sydney to Brisbane, she was able to commit full time to being a practising artist. While completing her Bachelor of Fine Arts Honours (First Class) degree, Glenda became a founding member of Impress Printmakers Studio & Gallery and its exhibitions coordinator. Since graduating, she  has tutored in Art Theory at Queensland College of Art, represented Queensland on the Print Council of Australia and participated in many exhibitions, most recently, touring exhibitions raising the awareness of the threatened Bimblebox Nature Refuge in central Queensland.

To view available works on paper by Glenda Orr, visit the stockroom gallery. 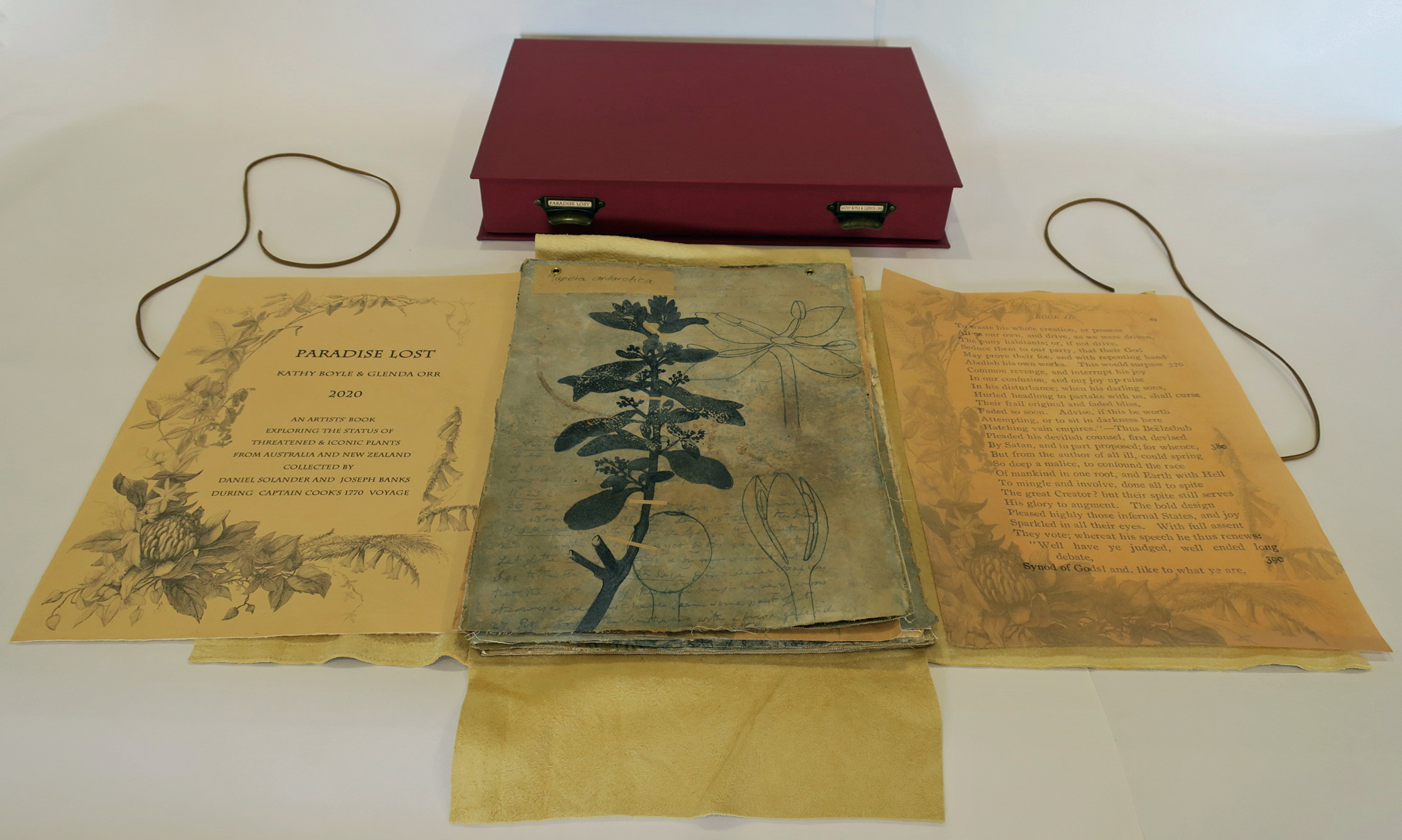 “This stab bound book makes use of milk cartons collected in the course of an artist residency at the Estonian Printing and Paper Museum, Tartu, in 2017, as well as a subsequent visit in 2018. This particular brand of milk featured the slogan -Thank you for loving Estonian milk©. The design is loosely based on traditional Baltic jewellery. In being transformed into a -necklace, the cartons themselves have been reimagined as a cliched token of love” – Jazmina Cininas

For over two decades, Jazmina Cininas has been charting the various incarnations of the female werewolf as a vehicle for her printmaking practice, completing her PhD research project, ‘The Girlie Werewolf Hall of Fame: historical and contemporary figurations of the female lycanthrope’ in 2014.

Since completing her MA in 2002, Cininas has exhibited her ongoing Girlie Werewolf Project throughout Australia and the Baltic States, and has also presented papers on printmaking and female werewolves nationally and at international conferences in Philadelphia, Budapest, Oxford, Manchester and Estonia.

Her artwork is in many public collections, including the National Gallery of Australia, National Gallery of Victoria, the Victorian Arts Centre, Broken Hill Regional Gallery and the Alice Springs Art Foundation. Her curatorial projects include Enchanted Forest: New Gothic Storytellers, which toured to significant regional galleries throughout Victoria and NSW between 2008-2009, and founding the RMIT Printmaking Summer Residency in 2004. Residencies include Fremantle Arts Centre, the Art Vault and Tartu Artist in Residence at the Estonian Printing Museum.

While best known for her technically demanding reduction linocuts, recent developments in Cininas’ practice include a series of artists’ books from recycled materials signalling a conscious decision to engage with a more sustainable art practice through the use of recycled materials.

View available works by Jazmina in our online stockroom.