In the studio with Jazmina Cininas – Artist Feature 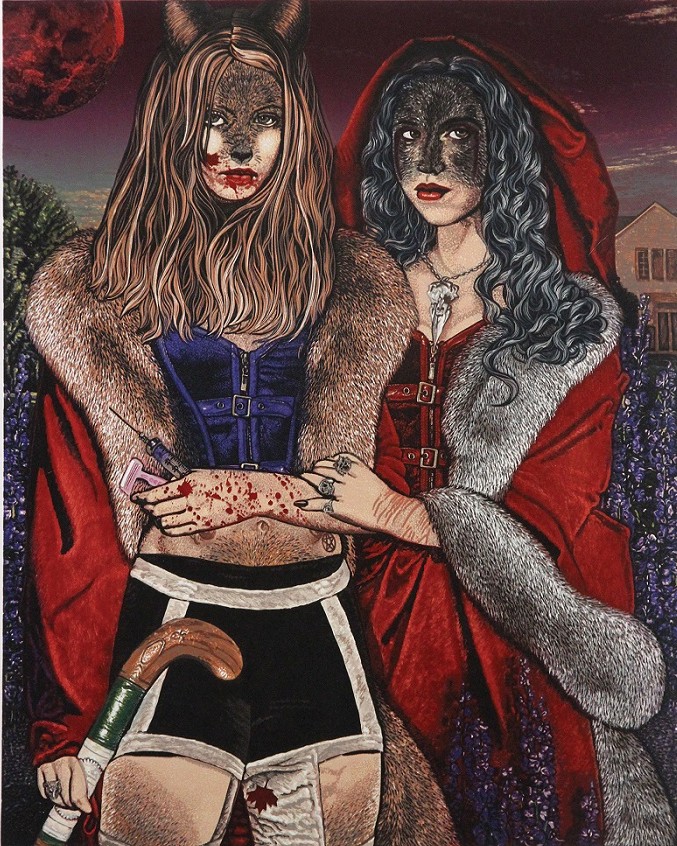 In the following artist feature we glimpse an insight into the technical side of Jazmina’s practice. Jazmina is a Melbourne-based artist who lectures in printmaking and artists’ books at RMIT School of Art and has exhibited extensively within Australia and internationally. In 2014, Jazmina completed her PhD project, “The Girlie Werewolf Hall of Fame: Historical and Contemporary Figuration of the Female Lycanthrope.” Through rigorous research, Jazmina identified individual women – both real and fictional – from throughout Western history who embody diverse aspects of the werewolf legend. She then produced a complete set of original reduction linocut portraits, creating a visual mythography of the female werewolf informed by the myriad incarnations of female lycanthropy while also bringing to light hidden or forgotten narratives. Jazmina has exhibited her ongoing “Girlie Werewolf Project” throughout Australia and the Baltic States, and has also presented papers on printmaking and female werewolves nationally and at international conferences in Philadelphia, Budapest, Oxford, Manchester and Estonia.

Earlier this year, Jazmina presented a solo exhibition of prints and artists’ books at the prestigious National MK Čiurlionis Art Museum. Eglė and the She-Wolves was Jazmina’s first solo exhibition in Lithuania since 2002 and received extraordinary critical acclaim and media attention. 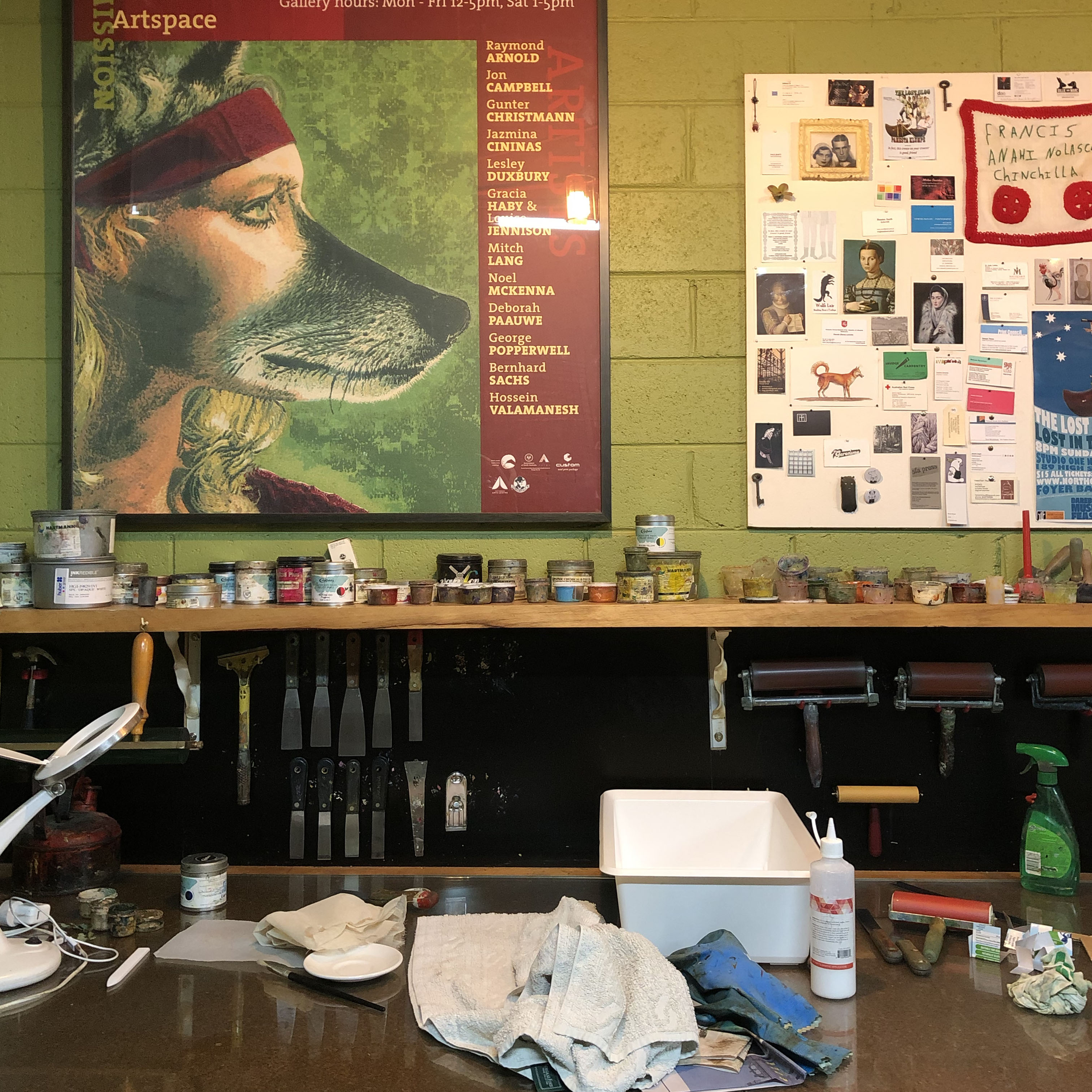 The following images from Jazmina’s studio, demonstrate the technically laborious reduction linocut process. Reduction linocut prints use the same piece of linoleum to print several layers over the top of one another in different colours. Areas of the block are cut away following the printing of each layer.

This particular print, Blood sisters is from 2016. Blood Sisters is an homage to the cult trilogy, Ginger Snaps – the story of two outcast sisters, Ginger and Brigitte, living in the mindless suburban town of Bailey Downs in Canada. Steam punk corsets reference the historical costumes from the third film, Ginger Snaps Back: The Beginning, merged with the more contemporary themes of menstruation and narcotic addiction that are the key narrative devices of the first two films, Ginger Snaps and Ginger Snaps 2: Unleashed. The purple of Ginger’s corset matches the wolfsbane flowers which has the power to keep lycanthropy at bay, and to which Brigitte becomes addicted in Unleashed. The lady shaver, hockey stick, hypodermic needle and scars from self harm are all motifs appearing in the trilogy. A “Warner’s Le Gant” undergarment here serves a dual purpose: an archaic ladies’ sanitary belt as well as a resurrection of the Early Modern lycanthropic girdle motif. 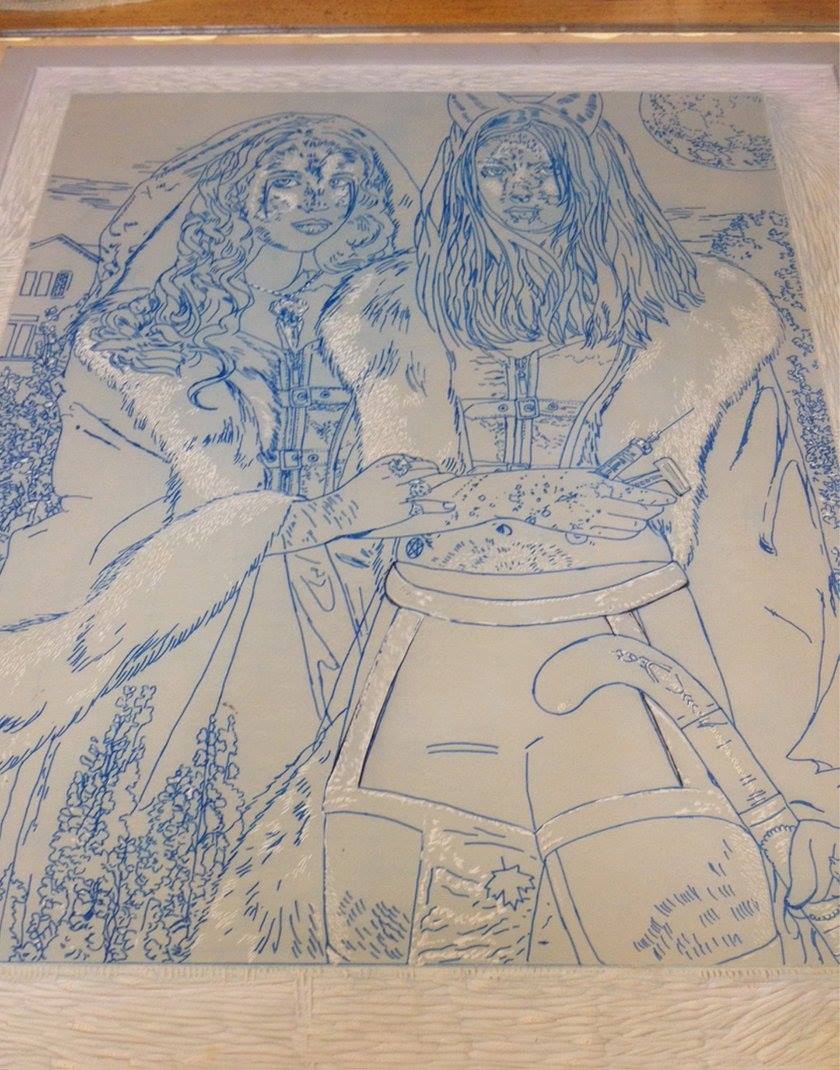 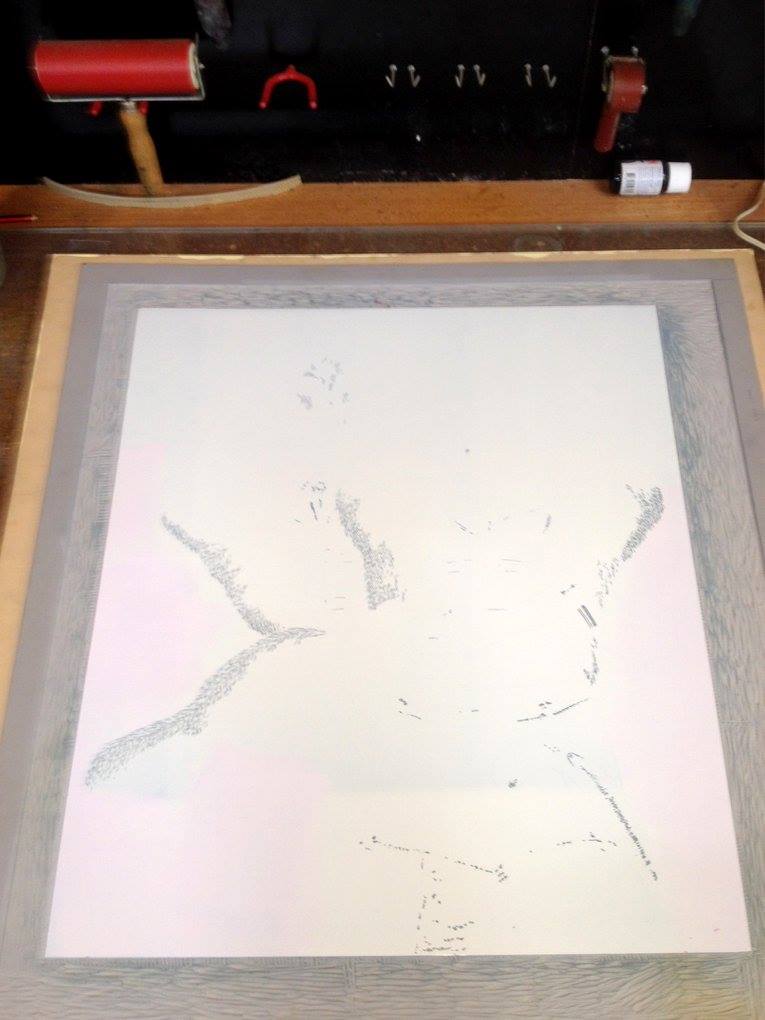 Layer one – ink on lino block 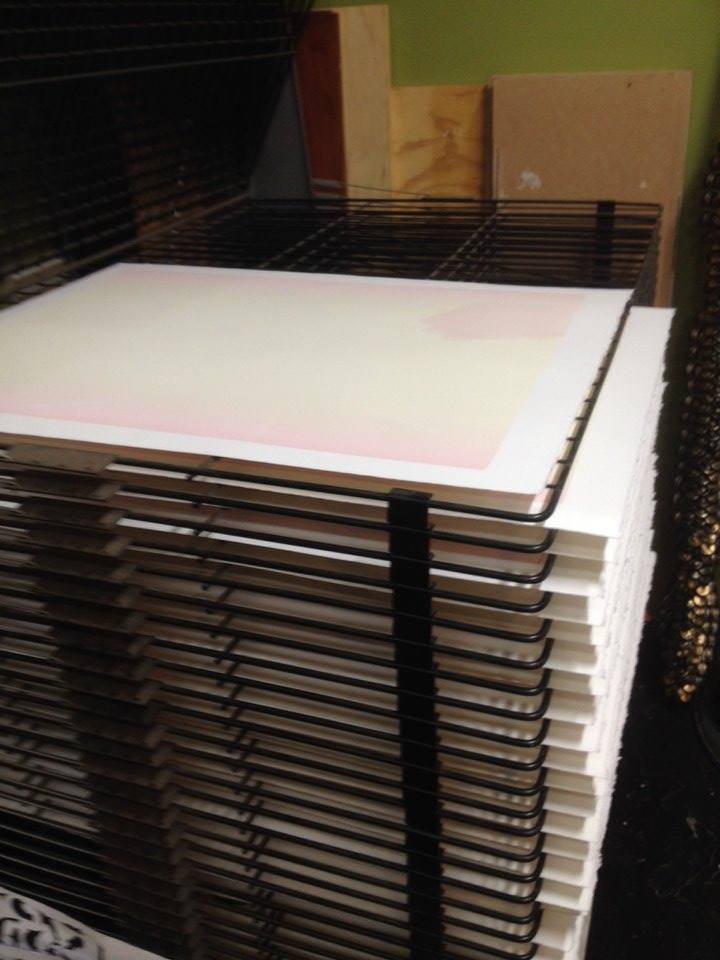 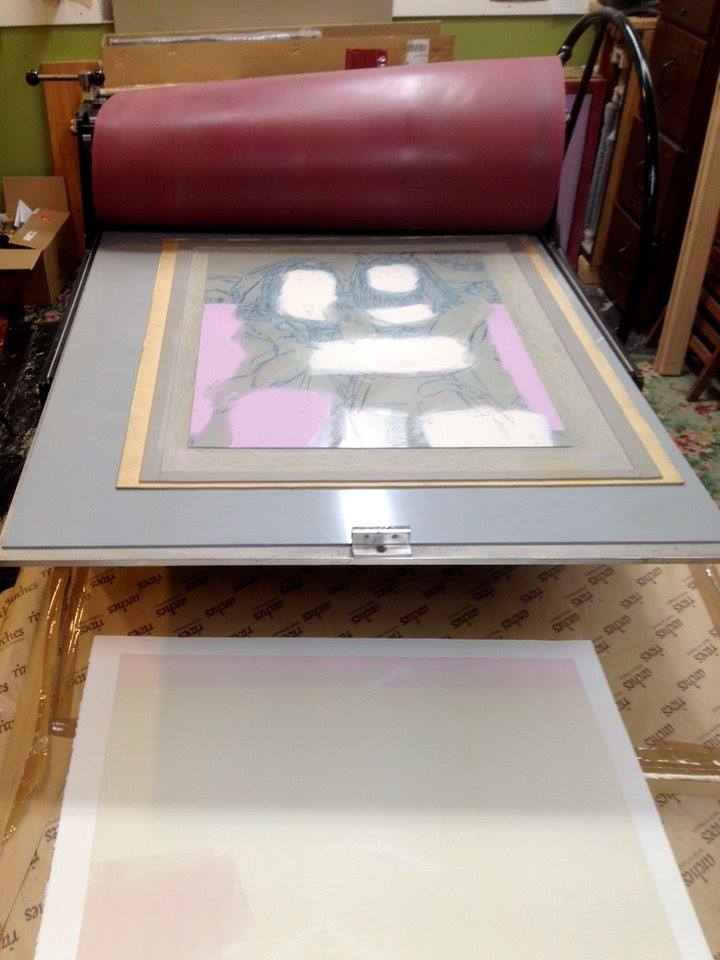 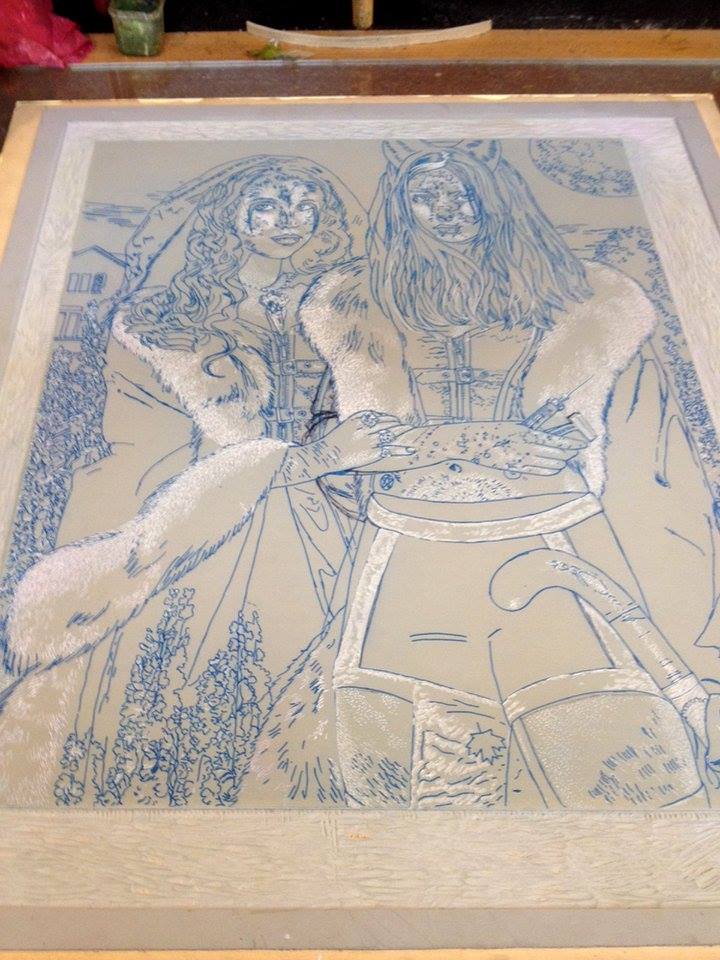 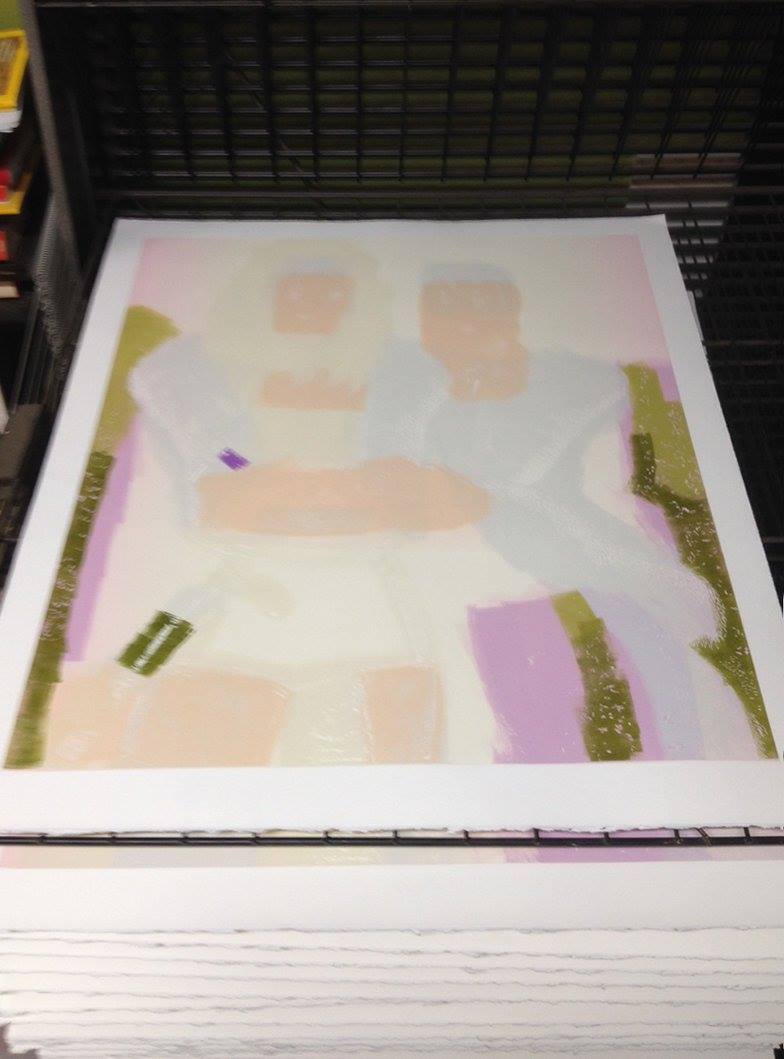 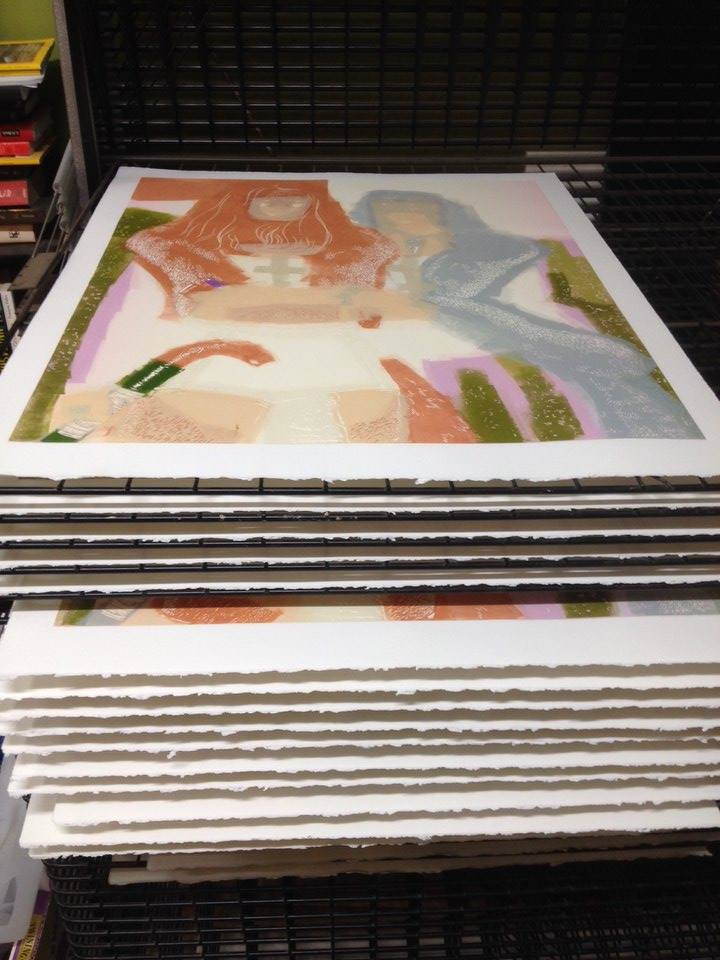 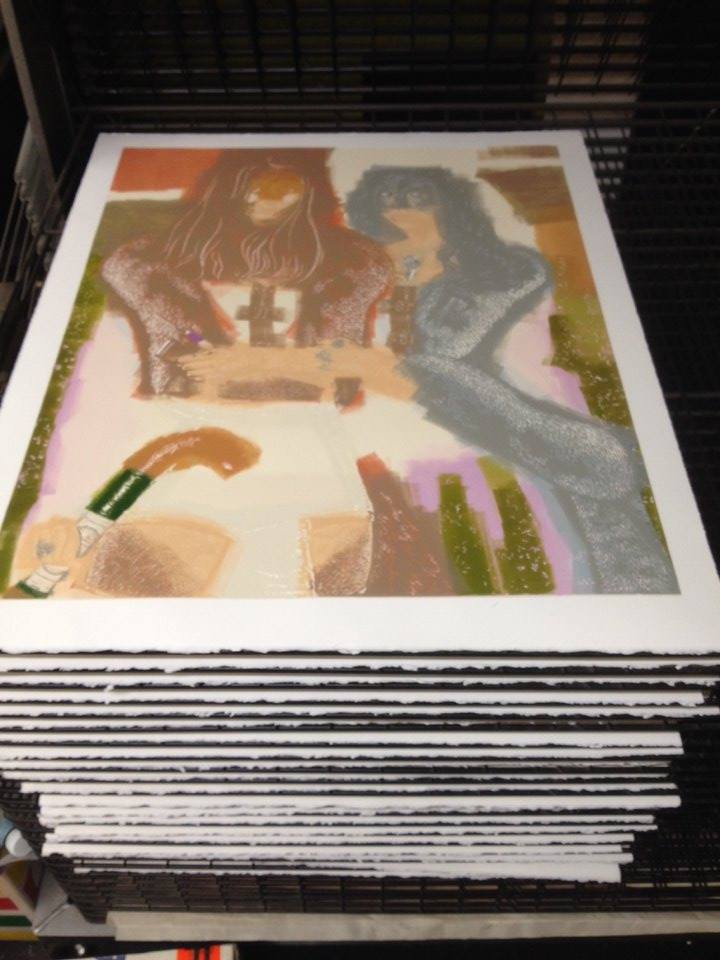 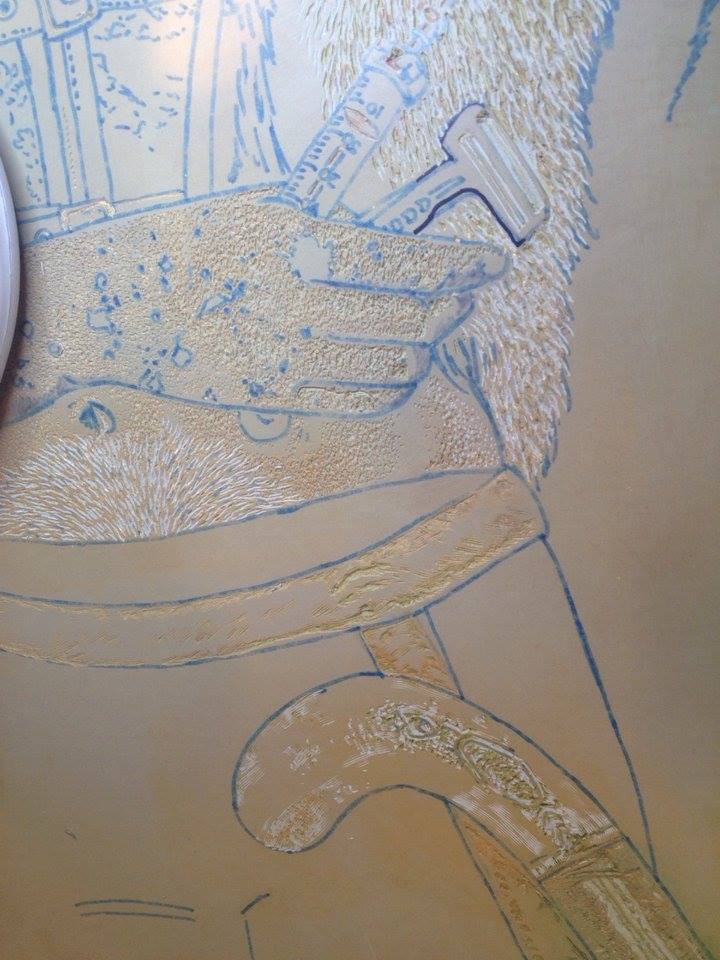 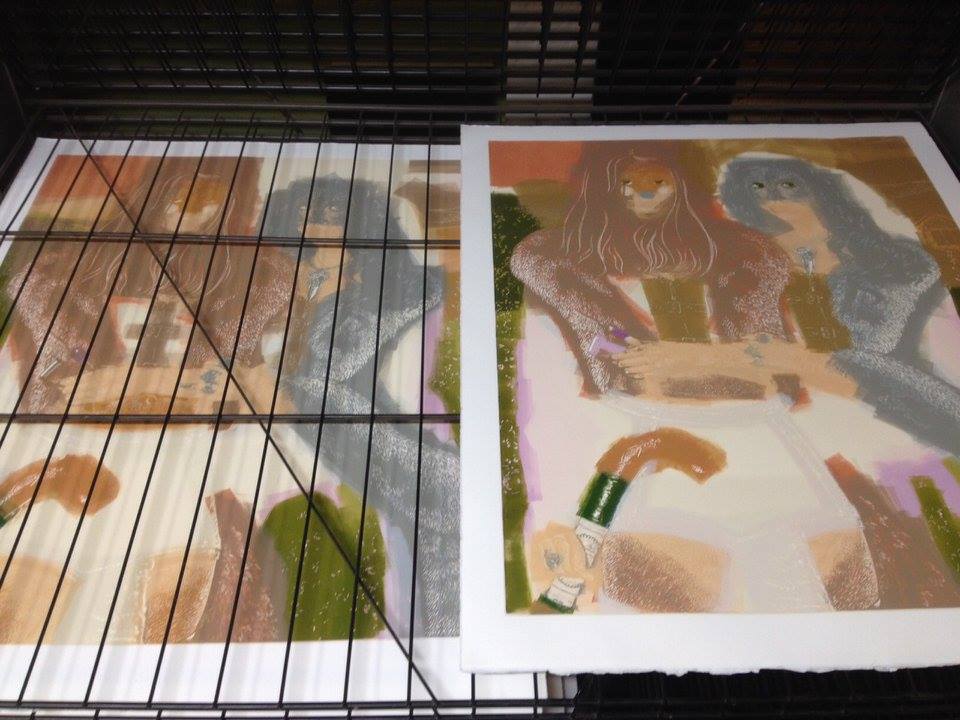 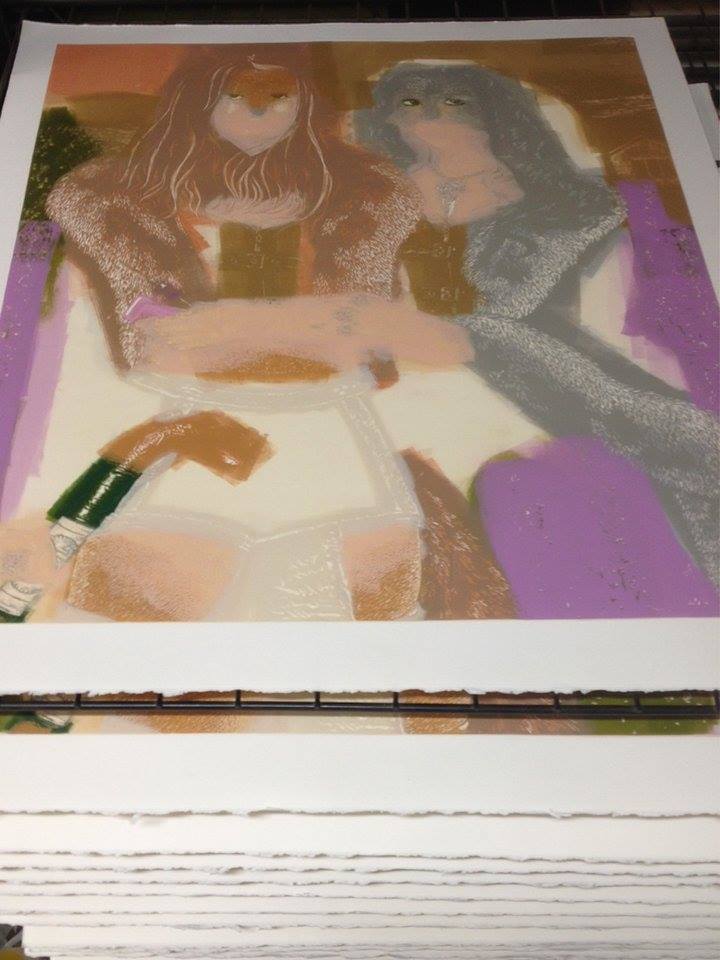 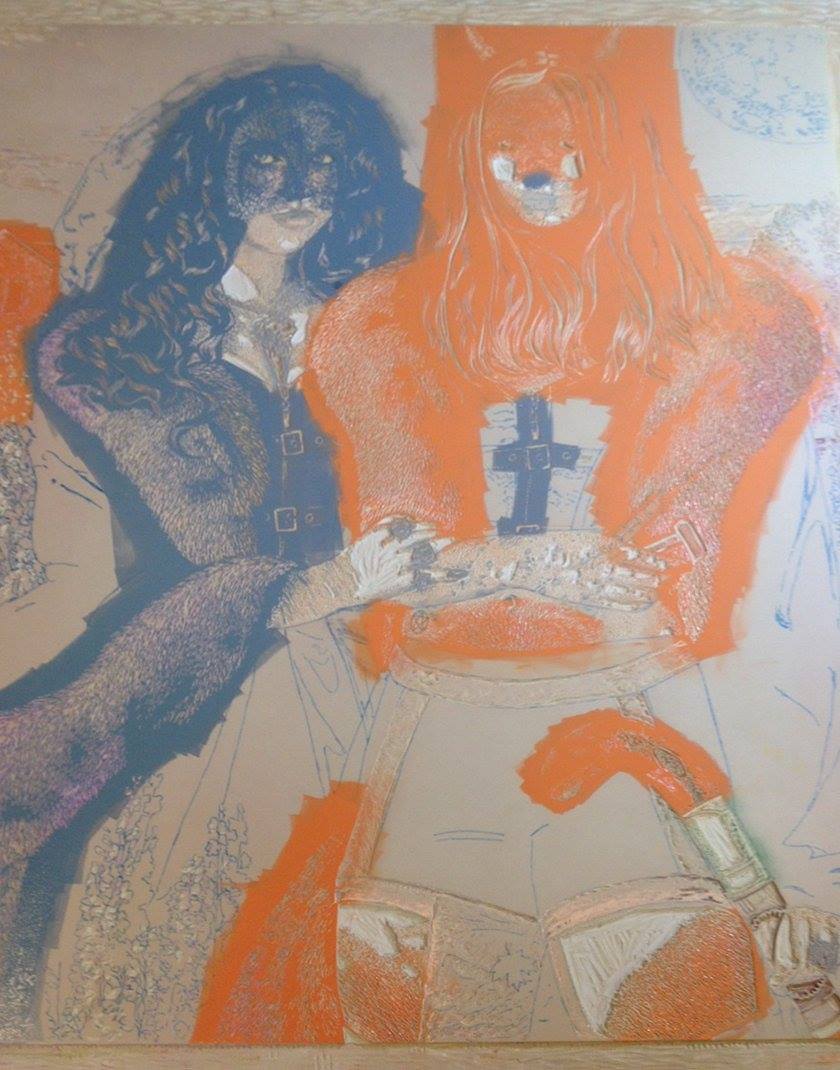 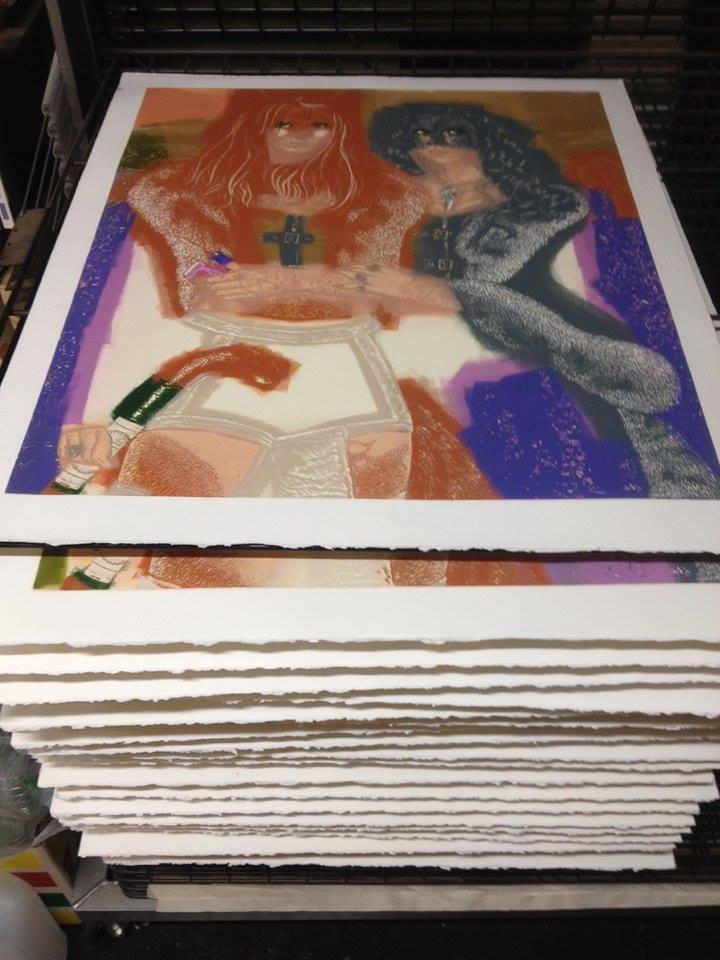 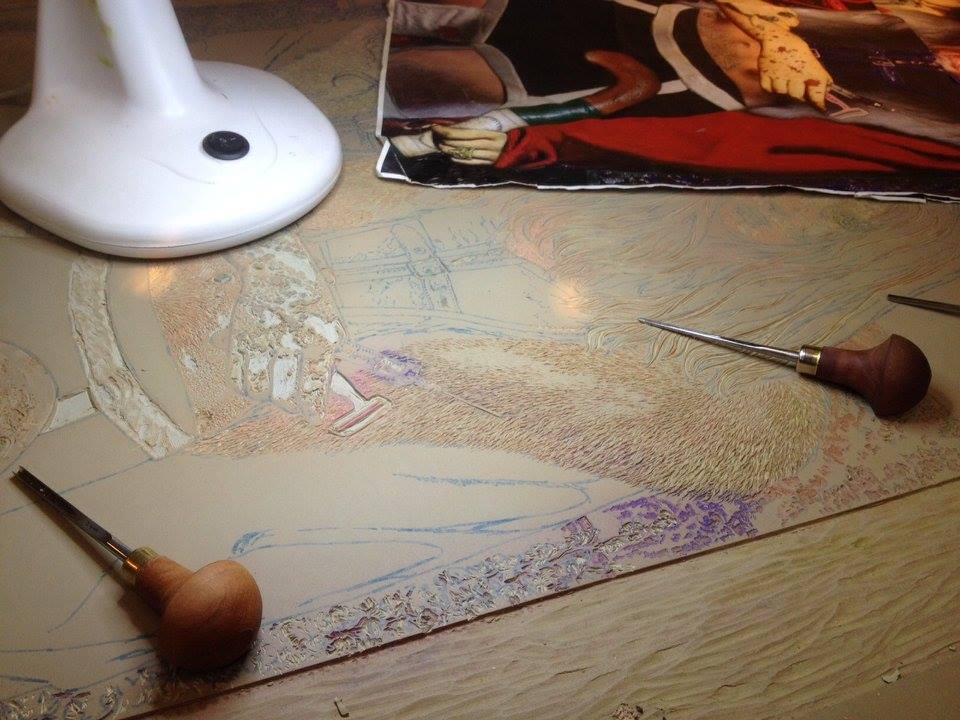 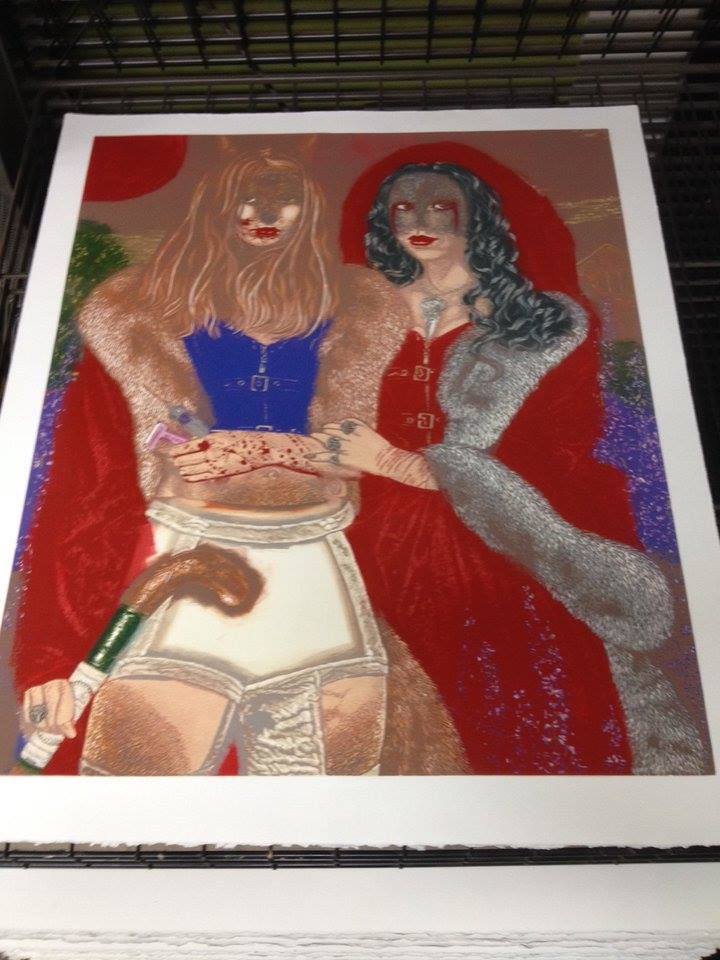 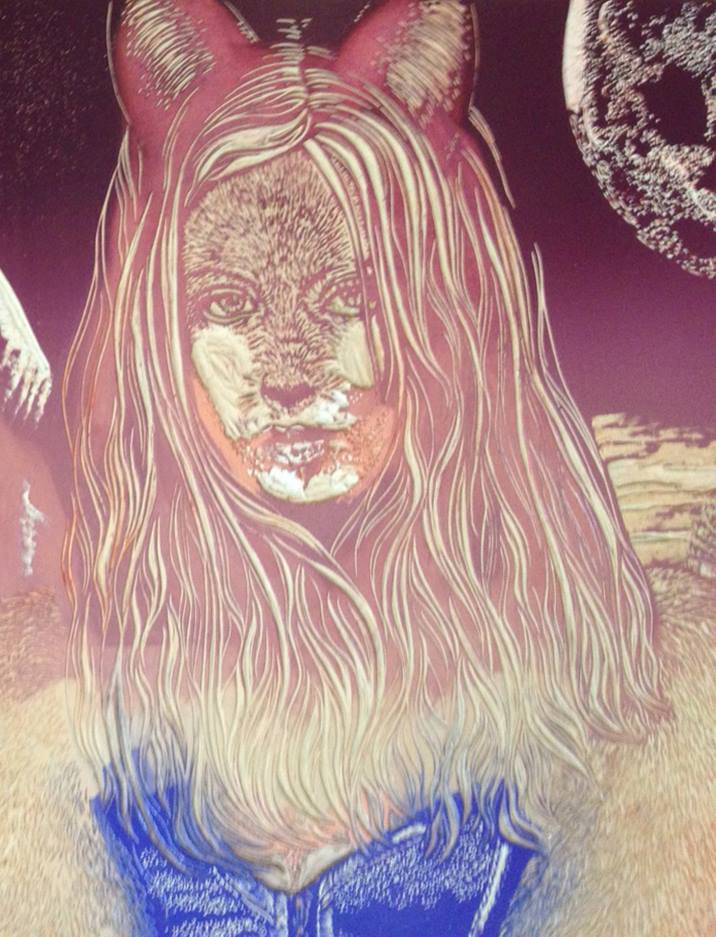 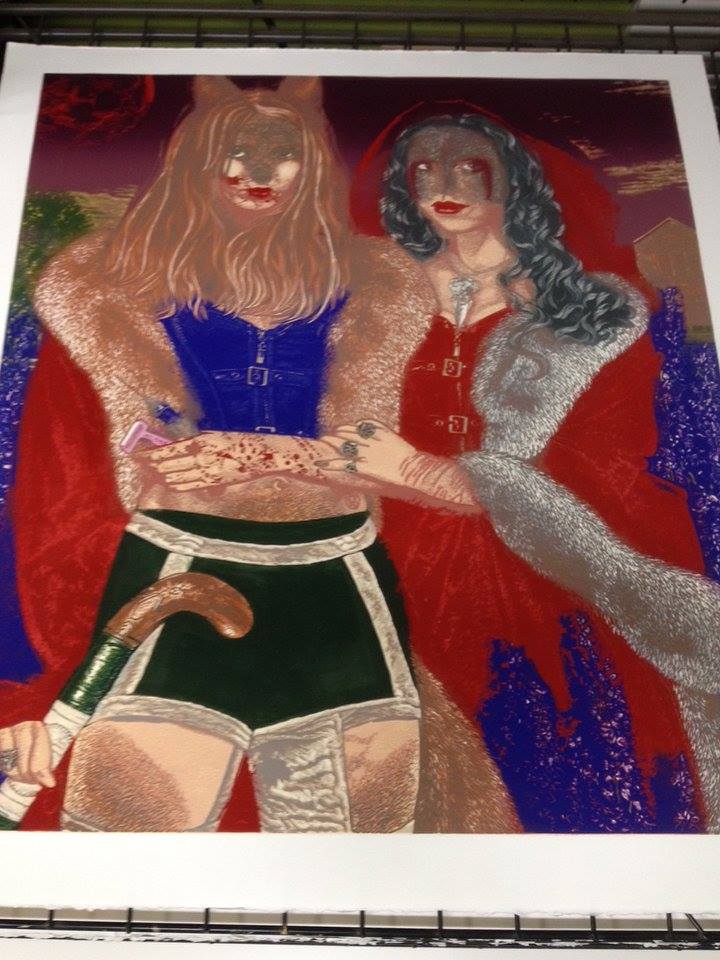 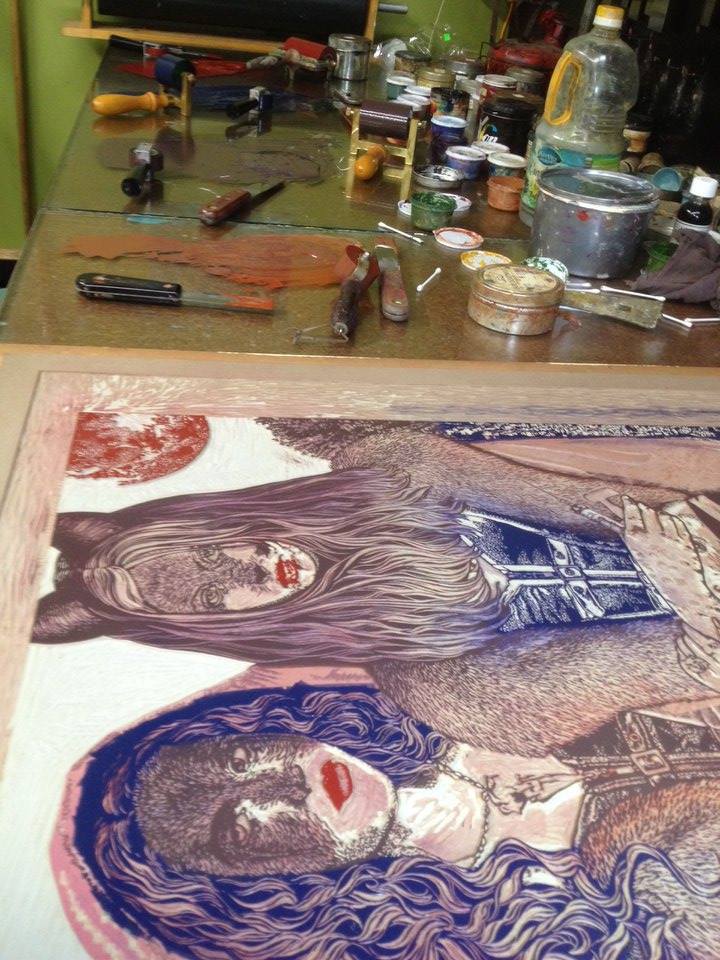 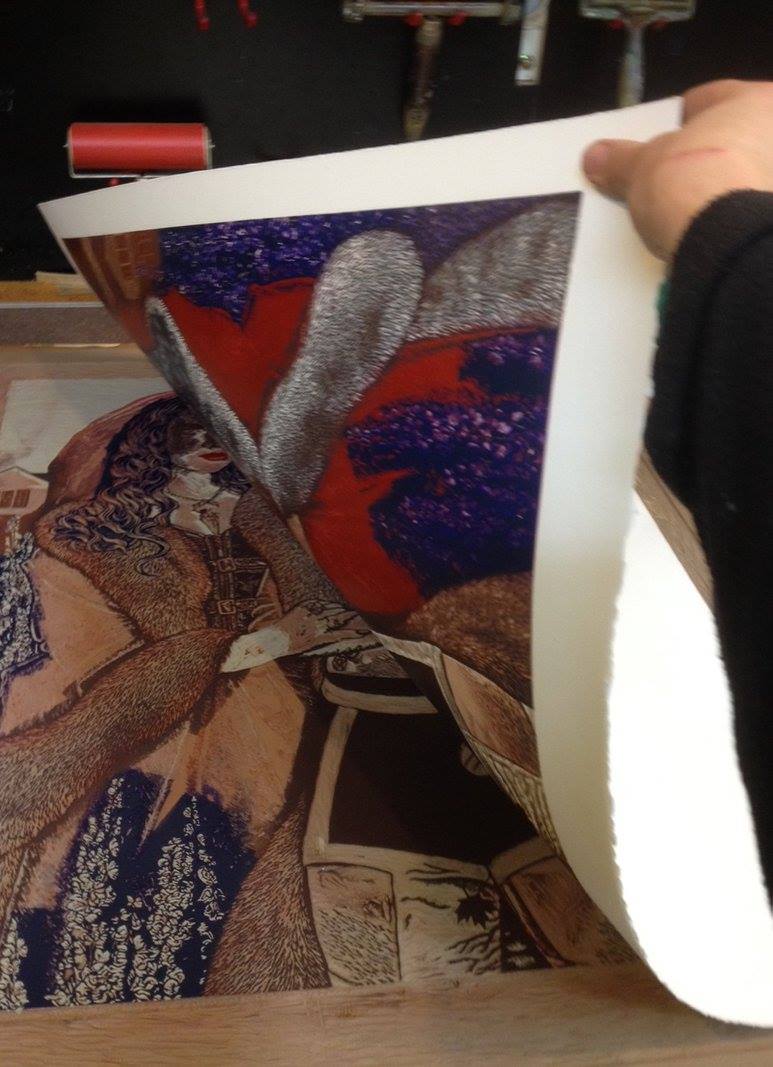 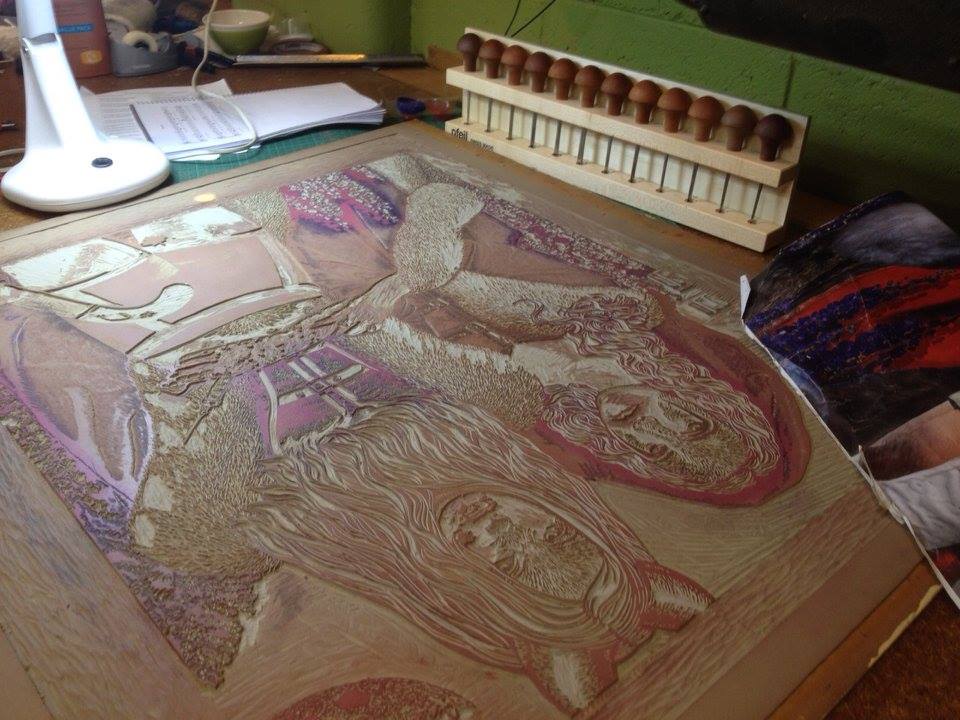 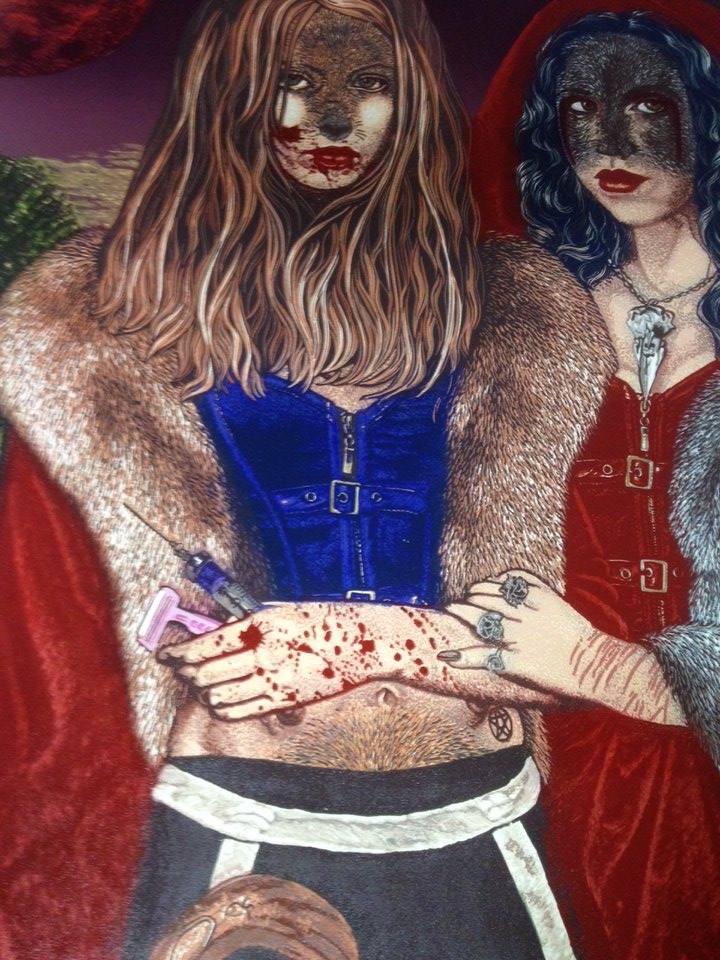 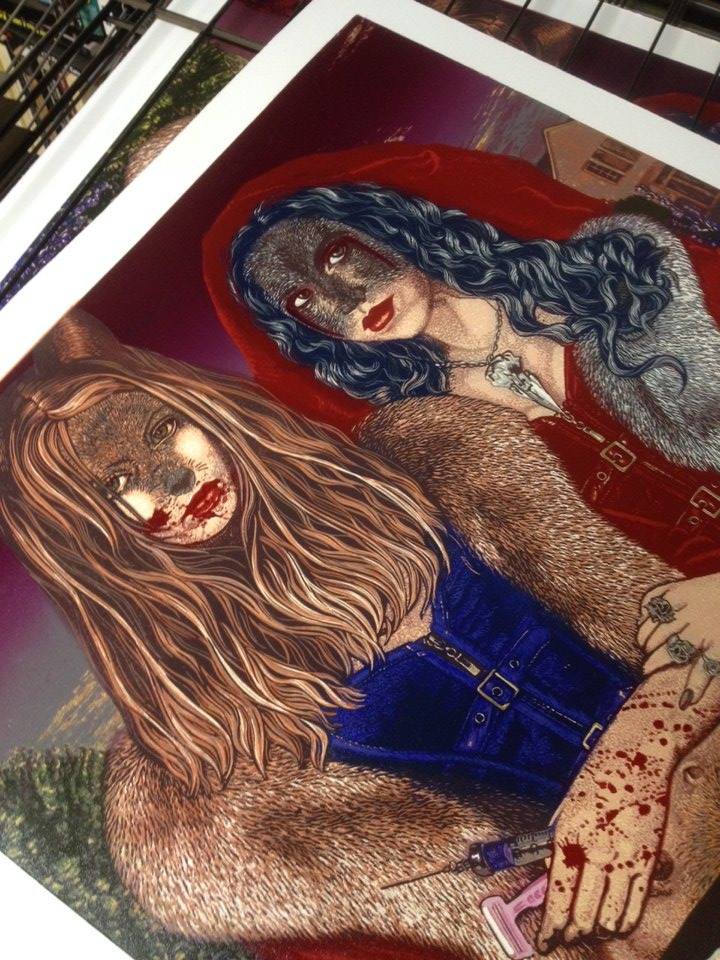 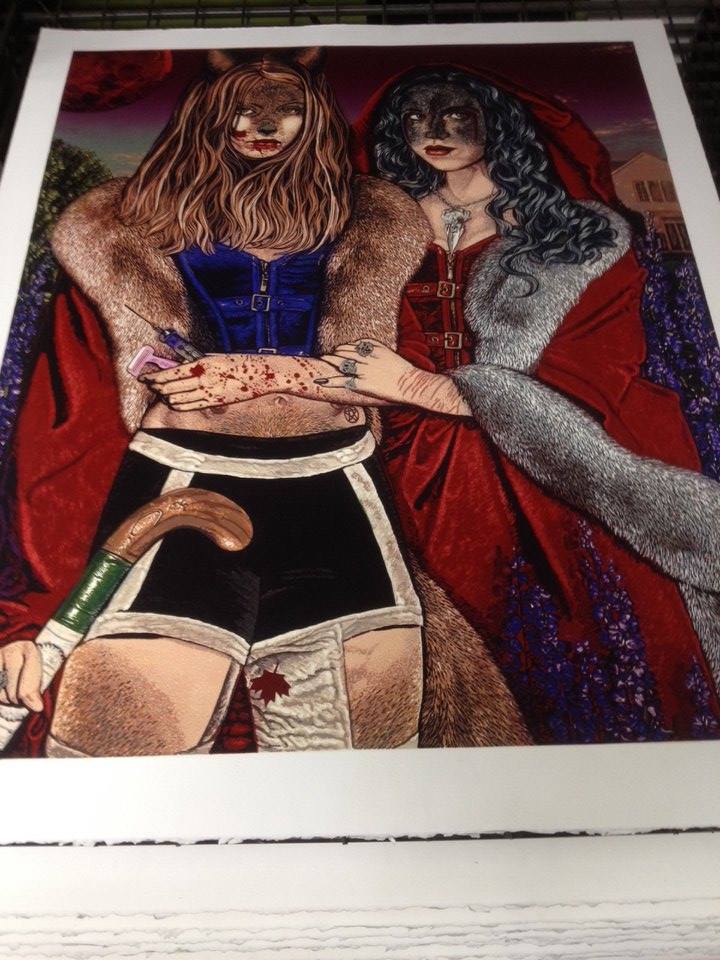 Jazmina also makes complex artists’ books. She uses recycled printed ephemera, such as used envelopes and encyclopedia illustrations, in a conscious effort to move towards a more sustainable artistic practice. Many of these one-off creations, draw on Baltic imagery and themes interspersed with antipodean motifs, inspired by her own cultural heritage as the Australian-born daughter of Lithuanian refugees. Most recently, she has been shortlisted in the 2020 Libris Awards: The Australian Artists’ Book Prize for her magnificent homage to the Baltic dairy industry, Estonian Love Token. Click here to read more.

The following images demonstrate the intricate process of putting together one particularly large artist book, The Stars Woo Salme to the Clouds with the Language of Birds. The vintage collage material was sourced during an artist residency at the Estonian Printing and Paper Museum, Tartu, in 2017. This material has been supplemented with used business envelopes. The three-tier concertina structure can be displayed in a circle and is commonly referred to as a star book.

The subject of the book references an episode within the Estonian epic poem, Kalevipoeg, in which the beautiful human girl, Salme, marries the Prince of the Stars, and leaves her earthly home to live with him amongst the clouds. Salme was hatched from a grouse egg, while her sister, Linda, began life as a hen and a third girl, their servant, had originally been a raven. In the tale, Salme refuses marriage proposals from both the Sun and the Moon, before agreeing to take the Prince of the Stars as her husband. Each of her suitors arrive with a retinue of sixty horses. 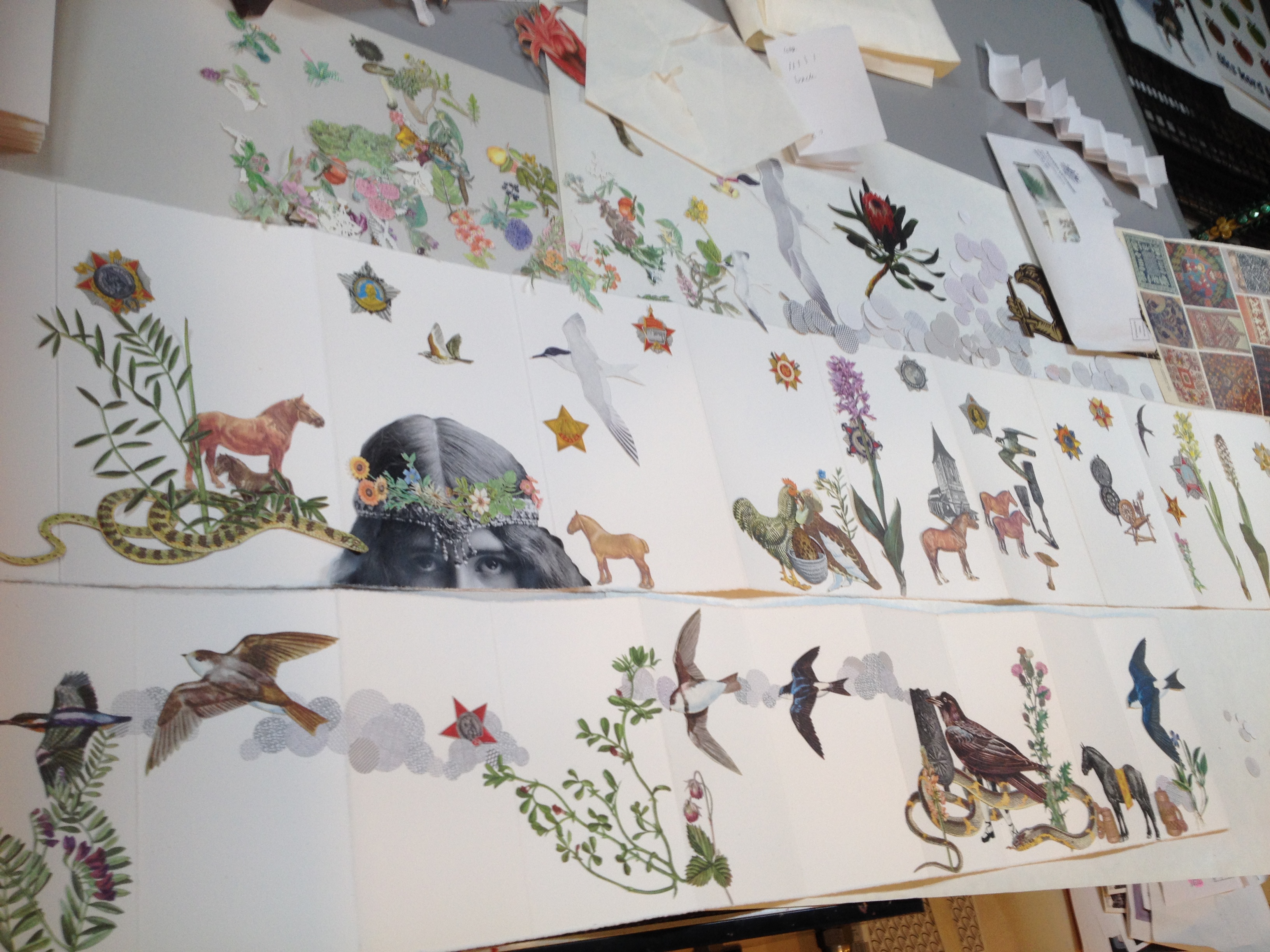 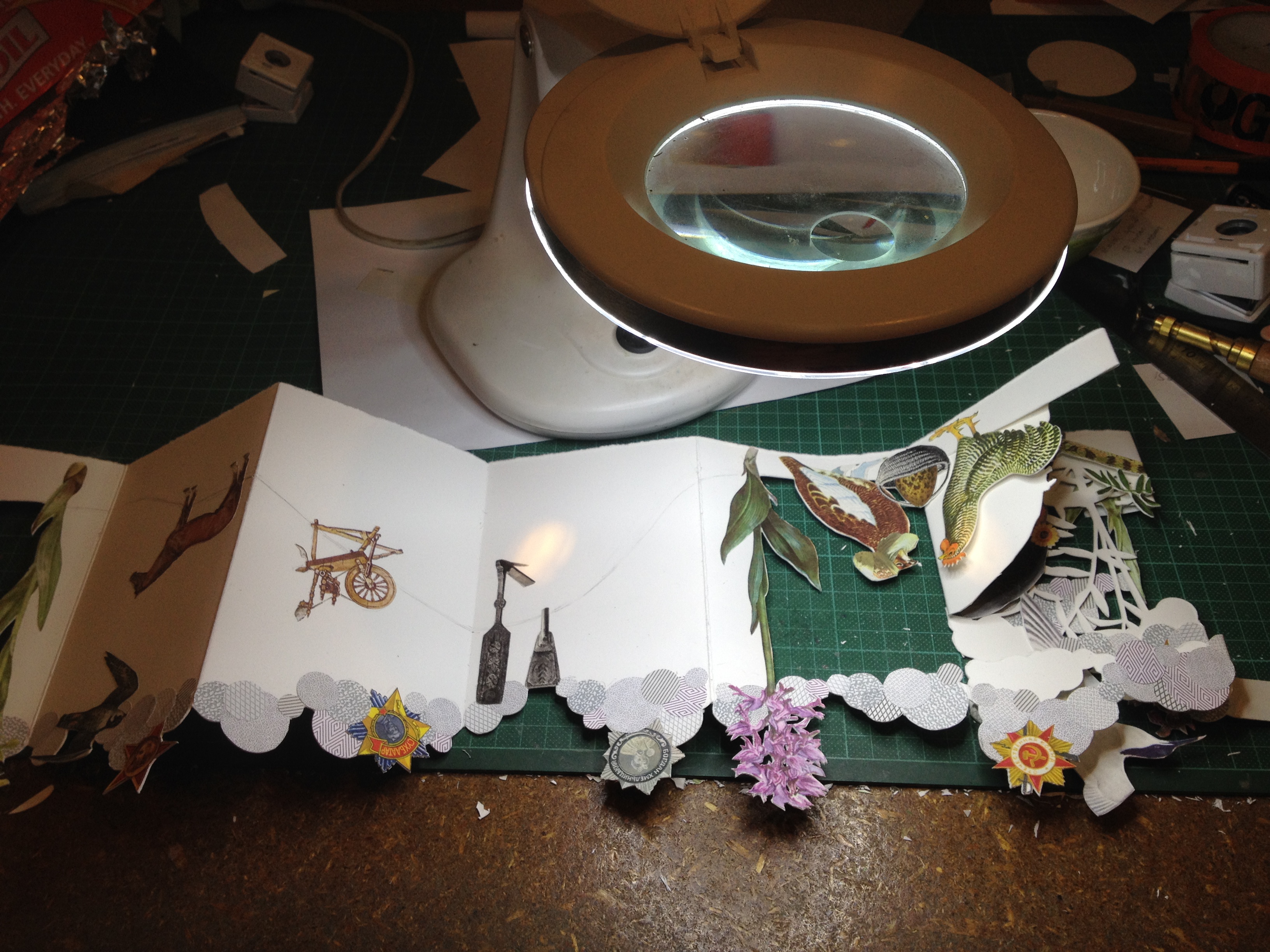 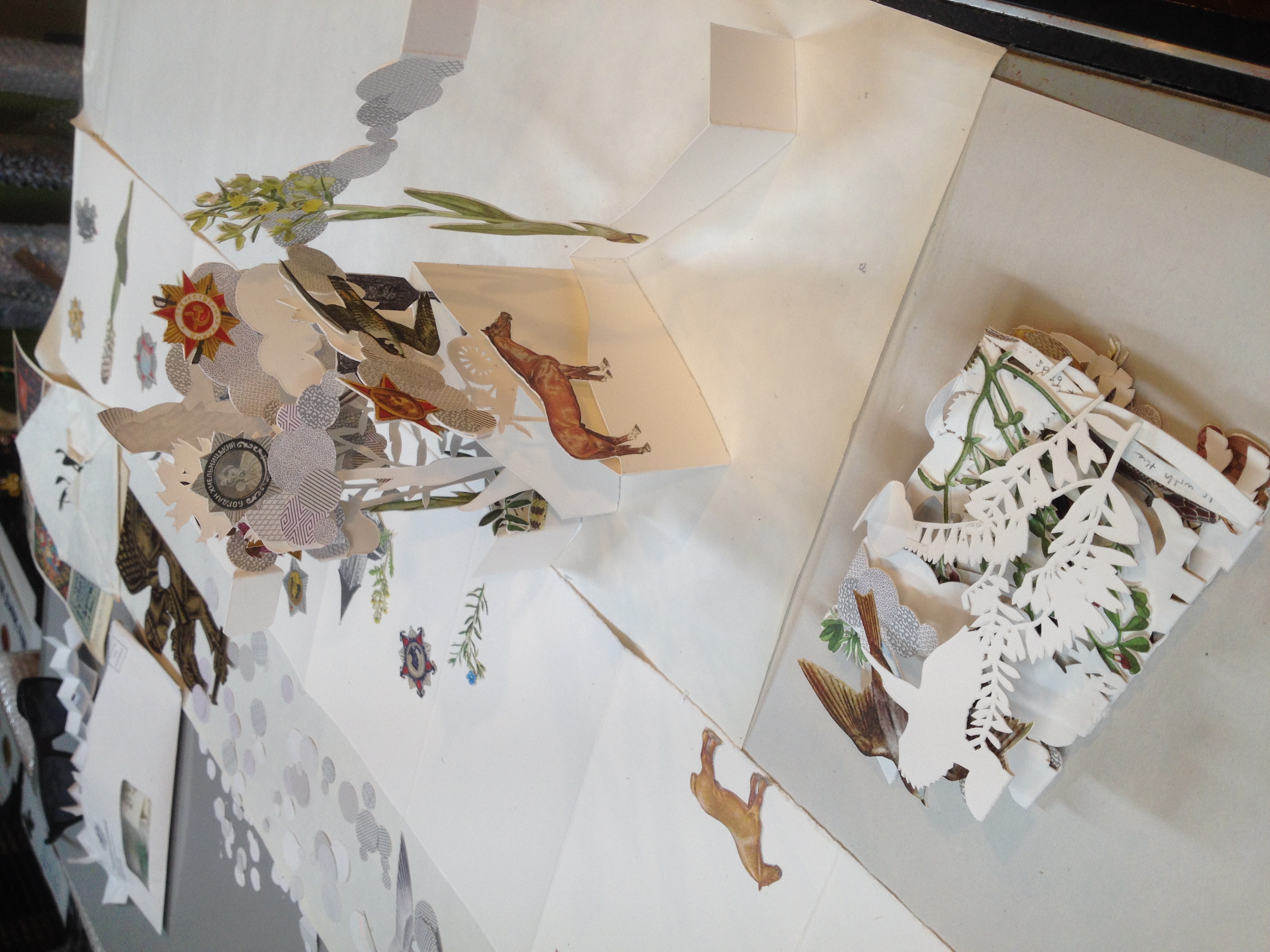 Jazmina Cininas  The Stars Woo Salme to the Clouds with the Language of Birds  artist book with collage from vintage Estonian reference books  20.5 x 81 x 11 cm

A selection of Jazmina’s prints and artist books are available to view and purchase through our online stock room. Click here for more. 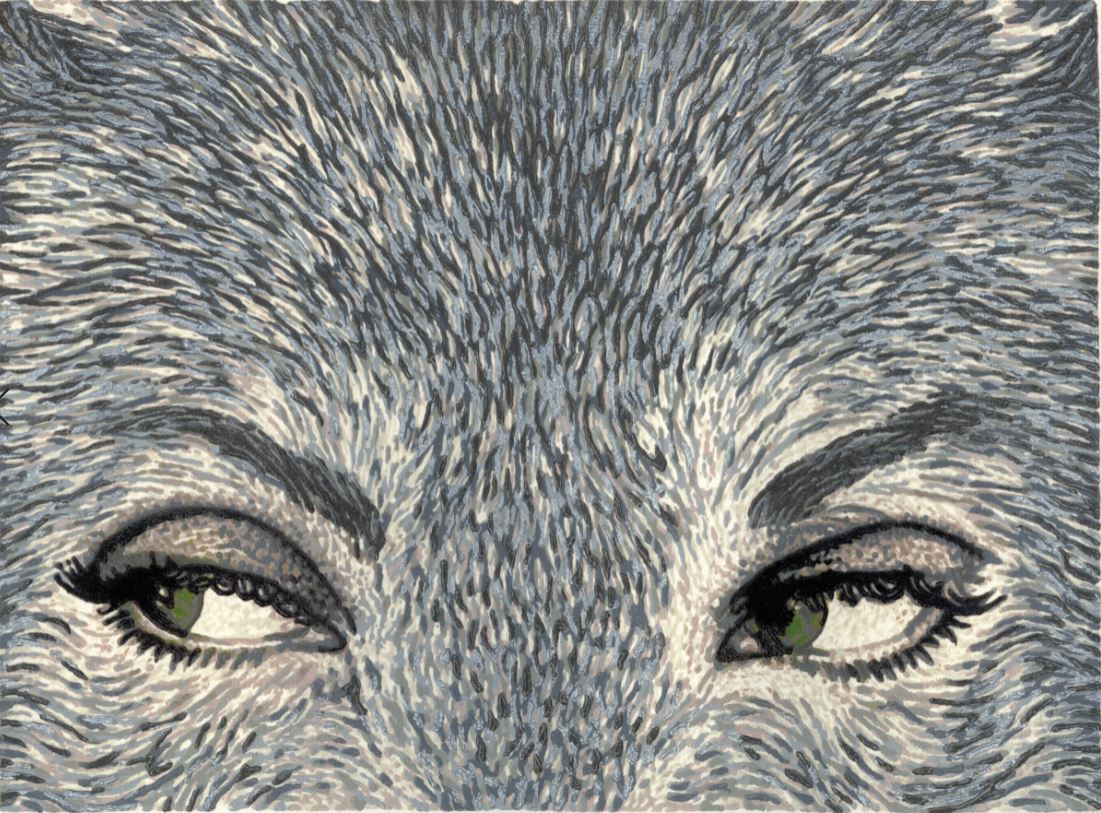