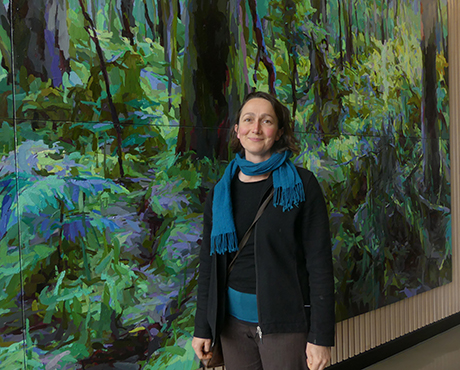 The award winning artist Mary Tonkin visited ACU’s Melbourne Campus recently to view her painting Spring, Kalorama which is on public display in the Daniel Mannix building on the Mezzanine Level. It’s been many years since the Melbourne-born painter has sighted the work, which was purchased for the University in 2003, and she was delighted that the painting has lost none of its potency.

The majesterial Spring, Kalorama was painted on-site over a period of weeks in 2002, the same year that Tonkin was awarded the prestigious Dobell Drawing Prize. She has since commented: “The act of drawing or painting allows me access to feelings that have no words which I cannot touch in any other way…The forms of the world have a kind of resonance in my real or feeling world – everything has a subjective emotional and intellectual texture, associations and memories.”

ACU Art Curator, Caroline Field invited Mary to the campus to revisit the artwork, and says: ‘It was a pleasure to see Mary reunited with her work, which had been painted 15 years earlier. Spring, Kalorama is an important work in Tonkin’s oeuvre, and to me it represents a power-surge of creative fury and inventive energy. She’s a painter of the heart, and her landscapes engulf the viewer. The physicality of pigment and brushwork is both terrifying and a thrilling outburst of emotion. The boundaries of earth, forest, and sky dissolve under the overwhelming density and beauty of nature. We are very fortunate to have a work of such great quality in the ACU collection.”

Mary Tonkin’s work is also held in major public collections including the National Gallery of Victoria and the Art Gallery of New South Wales, Sydney.