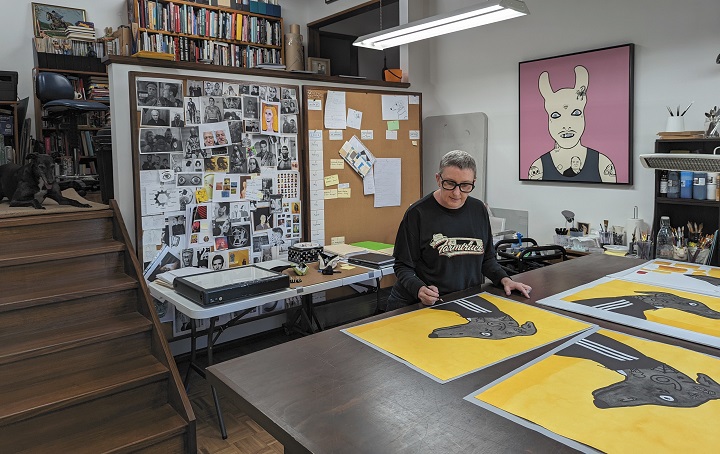 “Whatever I create is a musing on persona, contemplation about individuality and the notion of modification.” – Rona Green

We are delighted to share this wonderful interview with Rona Green, in the April issue of Art Almanac, who spoke with the artist ahead of the opening of her survey exhibition RONA GREEN: 30 Years of Printmaking, recently on view at Whitehorse Artspace in Melbourne. Here’s what she had to say.

For three decades, artist Rona Green has continued to explore and reimagine her observations of identity, personality, and transformation in the creation of playful human-animal mutations, which she brings to life in portraits made using a range of printmaking techniques and processes; namely monotype, linocut, lithography, digital printing, etching, and screen printing, as well as drawing, painting, and soft sculpture poppets.

Tell us about the ‘figure’ in your artmaking and how it has continued to captivate and inspire your imagination over three decades of practice?

The figure is continually fascinating and a constant challenge to work with. As a subject the animal kingdom is inexhaustible. Early on, my figures were various individual species that became hybridised over time. A formative experience was encountering Egyptian art, specifically representations of theriocephaly – not to mention a childhood love of cartoons and comics centred on anthropomorphic characters having a major impact on my own way of image making. A cornerstone of my practice is conjuring up absurd persons that amuse me, and all going well will engage the viewer and prompt an unspoken dialogue.

Initial ideas are pretty much always ignited from observation or reflection on actualities, then imagination plays its part, and a kind of fusion of the real and the fanciful transpires. Many of the subjects in my pictures are persons known to me, others are amalgams of the real and imagined, and some are purely dreamt up. Whatever I create is a musing on persona, contemplation about individuality and the notion of modification. I’m interested in how identity is expressed via the body; physical appearance and the ways it can be altered; the skin and its potential to be the stem point for transformation.